How can Wanda Maximoff (The Scarlet Witch) be realistically imprisioned in the MCU?

In Captain America: Civil War, when Tony visits the Raft, a floating prison in the middle of the ocean, we see Wanda in a straight jacket in her own isolated cell. Makes sense considering how powerful she is. But could she be realistically constrained? In the comics, from what I understand, not a chance. But in the MCU, if she can create a 100ft crater using Vision as the wrecking ball, not to mention how exceedingly strong Vision is, she should be able to easily break out of her cell. Right?

I think the best explanation is that she's accepting her fate, at least temporarily. She's been through an emotional ride and doesn't have the drive to break out and figure out what's next. And given Captain America frees them soon enough, I think it makes sense that she could wait that long. Is that a more realistic explanation? 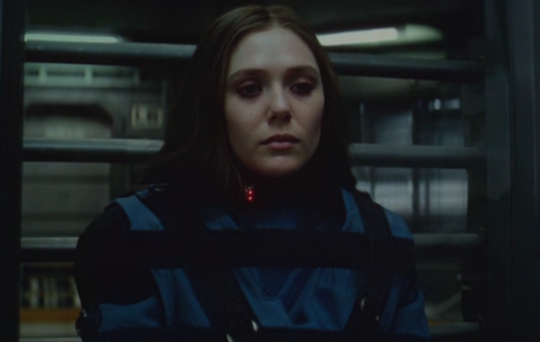 She was not only in a straightjacket, preventing her from using her hands which it seems she needs to do to focus her magic/powers, but she also had a pair of blinking lights and a collar around her neck. The MCU wiki and tumblr in general call it a shock collar, but I didn't see any shock involved, it may be that simple or more involved. Of course, Hawkeye proved all it took to stop her in Age of Ultron was a taser arrow to the head. Sleepy Wanda is no threat.

Marvel comics, and really any comic or series where people, mutants or enhanced humans have powers, often have some device, usually a collar, that is used by normals to remove/restrict/dampen/depower them. Two related tropes Power Nullifier and Slave Collar. Loki's muzzle comes to mind, as well as Loreli's (and Sif's) in Agents of SHIELD 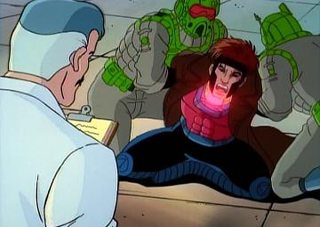 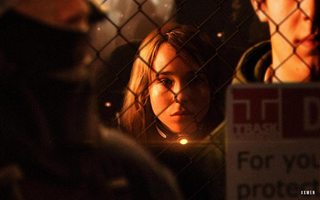 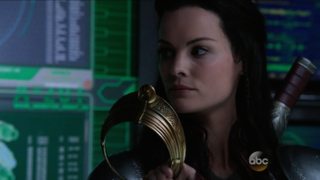 The movies haven't gone the cartoony route of Agents of SHIELD tree sap prison cells and stuff, keep in mind that technology is abundant in the movies.

In Age of Ultron, the Avengers capture the Hydra base, and recover some or all of the data on the creation and study of the Twins, which Sharon gives to Cap during it. At the end, between AoU and Captain America 3, Wanda has trained with the Avengers, leading to more data. In Civil War, Tony basically hands over the Avengers to Senator "Thunderbolt" Ross and the UN, and having fought with Wanda and the rest of Team Cap, likely used that data to form a way to keep Wanda from using her powers.

Essentially, they are keeping her sedated or shocked, restrained, and depowered as best they can. A comatose or heavily drugged prisoner is a prisoner who can't fight. If Wanda is unrestrained she can bring buildings down with her mind. The other three are normal peak humans, unenhanced, so they don't need to be kept sedated.

Casting a hex requires a gesture and concentration on her part, though the gestures are largely a focus for the concentration

With her in the straight jacket, she cannot gesture and use her hexes. It can also be assumed the she is drugged, but we have no proof of that.

What we must remember is that Tony Stark is essentially the Marvel Bruce Wayne. When Batman was part of the Justice League, he kept files on how he would defeat each of its members in case it was ever needed.

Given Stark's nature, its not far fetched to believe that he would do something similar if only just to better understand the powers of his fellow Avengers.

Wanda is restrained in a straitjacket, a shock collar, and is almost certainly heavily drugged.

The shock collar is likely triggered by detecting neural activity as well as physical; the drugs limit her to basic mental functions and were the drugs to become ineffective, the collar could automatically activate.

Wanda IMHO likely does posess Chaos Magic (going by Joe Russo's comments) but has yet to realize it.

The combination of the drugs imprisoning her mind, the straitjacket imprisoning her body, on top of being in an underwater prison. Given the script's emphasis on her lack of rights due to having no nation, torture is not out of the question to have happened.

Even worse, she is also in a separate hall to the other Team Cap members. "RL-8" refers to "Raft Level 8", and there are multiple halls, likely 6-18 per level.

Clint says "gentlemen, the futurist is here!", were Wanda present, he would surely have said "ladies and gentlemen". She's not in that hall.

She also appears to have no bed in her cell.

Sam, Clint, and Scott likely had no idea of her treatment.

Another thing to note is that if Chthon is indeed active in the MCU, Wanda is now going to be very susceptible to his influence.

I think another reason maybe because of everything that's happened. I would say it's about a week and like 2-3 days since the bombing accident. I think it would have taken a day or two for the Accords to be made after the accident, another a day or two for the Accords to be presented to the Avengers, three days for them to sign, a day for the car park fight and then they were arrested and taken to the Raft the next day, which adds up to about a week and a few days. It would have been a long week for her so she's probably tired. On top of that, it probably hasn't been that long since her twin brother died (I say 6 months tops, if that) and that would also mean it would have been about half a year since she was freed from Hydra and being in a cage/prison environment. For her to suddenly be back in it may make her go into a sort of in shock headset, where she didn't even try to fight back.

4
How do Stan Lee's random appearances work in the Marvel Cinematic Universe?
12
If Scarlet Witch of MCU has the ability to fly, why didn't she attempt to fly earlier?
3
How is Scarlet Witch able to stop the train?
4
How can Spider-man lift the Winter Soldier's metal hand so easily?
9
How come Wanda can overpower Vision?
17
Why didn't Vision damage the Quinjet in Civil War?
27
How can the Scarlet Witch break the Mind Stone?
2
Is this a script mistake in Ant-Man and the Wasp movie?
6
Is there an in-universe explanation as to why the Ancient One is bald?