What is the real vehicle used as The Highwayman's truck?

Can anyone tell me what the real vehicle used as The Highwayman's truck is? Is it actually a real helicopter fixed into a truck? 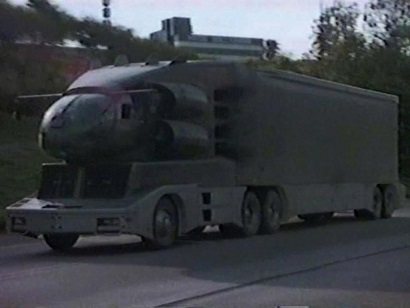 It was a 1980 Kenworth cabover with an 8V92T diesel which was later converted into the futuristic truck.

As this news article says:

Though it looks like a Luigi Colani creation, the truck actually started out as a 1980 Kenworth cab-over with an 8V92T diesel before it was converted, at a cost of $287,000, into the “futuristic” (the series was set in 1992) truck used in the series. Jon Ward Motor Sports of Alpine, Texas, which claims to have built the truck for the series, apparently held on to the truck after the series ended and kept the futuristic look, but began to convert it into a motor home, complete with stacked washer and dryer, on-demand hot water and room for a fireplace.

From the looks of that actual truck in real life and of the helicopter scene, I don't think it is a real helicopter. The front end is build to look like a helicopter along with the nose. CGI is used for the actual launch scene of the helicopter followed by an actual/CGI helicopter when it actually flies.

For the inside shots of the cab, parts of KITT’s dashboard were reused

In fact, some of the dashboard on the Highwayman's truck is salvage from "K.I.T.T.", the artifically intelligent car on "Knight Rider".

it is evident that the insides of the cockpit/cab were not of a real helicopter.