Why can some portraits in Harry Potter talk and move while photographs can't?

In Harry Potter movies, wizards in the portraits can talk to and can visit their own portraits at will. But the other pictures (such as in the album of Harry's and various photographs shown in the movies) can only move. Why is it this way? Is there some thing special about the portraits?

Its a matter of how much magic/time is poured into them.

The portraits are enchanted, and some are further taught to act that way. From JK Rowling herself, via Pottermore:

When a magical portrait is taken, the witch or wizard artist will naturally use enchantments to ensure that the painting will be able to move in the usual way. The portrait will be able to use some of the subject’s favourite phrases and imitate their general demeanour. Thus, Sir Cadogan’s portrait is forever challenging people to a fight, falling off its horse and behaving in a fairly unbalanced way, which is how the subject appeared to the poor wizard who had to paint him, while the portrait of the Fat Lady continues to indulge her love of good food, drink and tip-top security long after her living model passed away.

Some portraits have much more work than others too.

Some magical portraits are capable of considerably more interaction with the living world. Traditionally, a headmaster or headmistress is painted before their death. Once the portrait is completed, the headmaster or headmistress in question keeps it under lock and key, regularly visiting it in its cupboard (if so desired) to teach it to act and behave exactly like themselves, and imparting all kinds of useful memories and pieces of knowledge that may then be shared through the centuries with their successors in office.

The general photographs are not put through such extensive magic and work. Like in real life, a snapshot is taken in a second, but a oil painting takes much longer.

General photographs are made to move with Developing Solution. Still magical, but just not as magical as the portraits. Again, from Rowling herself:

A: As a vast number of people have pointed out to me in the last twenty four hours (some of them related to me by ties of blood) Colin DID develop a photograph from his camera in 'Chamber of Secrets' (my previous answer stated that he never did so).

Cameras, like radios (or, as the wizards call them 'wirelesses' – they're always a bit behind the times when it comes to Muggle technology) do exist in the wizarding world (there's a radio in the Weasleys' kitchen and we know there are cameras because of the moving photographs you see everywhere). Wizards do not need electricity to make these things work; they function by magic, but in the case of such objects the wizards liked the Muggle invention enough to appropriate the idea without adding cumbersome plugs/batteries.

I have an old notebook in which it says dev sol (potion) magic [indecipherable word] photos move. Adept as I am at interpreting my old scribbles, I can tell you that the original idea was that wizards would use a magical developing potion to make their photographs move.

Colin being the photo bug in Chamber of Secrets 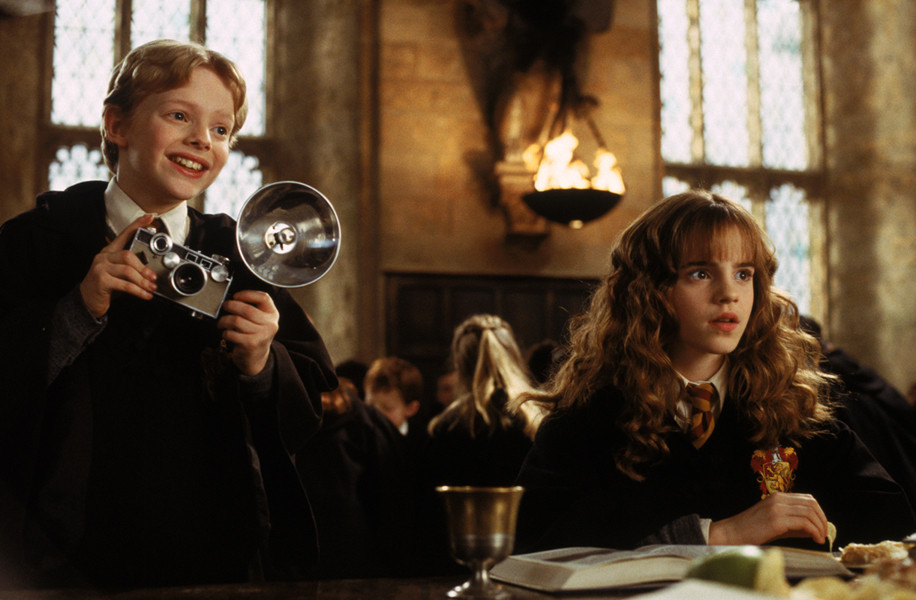 The newspapers work like the photographs and wanted posters, with the same type of developing solution, potion, or minor enchantments.

It's all the same, just on much different scales of magic.

26
What is the nature of Professor Snape's Patronus and why does it appear in the Forest of Dean?
8
Why did everyone keep saying to Harry that his eyes are like Lily's?
9
Why was Lucius Malfoy never arrested?
6
Why don't wizards teleport more?
6
Why cannot everybody become ghosts in the Harry Potter movies?
8
Why didn't Harry Potter use the Resurrection Stone?
2
Why are some spells in Harry Potter in English?
23
Why did Albus Dumbledore's clothing change in the third movie?
4
How crucial are the wizard wands in Harry Potter?