Was Boomhauer really a Texas Ranger?

On one of the final episodes of King of the Hill, Boomerhaur's occupation, which was never previously discussed (other than being a ladies' man who sometimes had benefactors) was possibly revealed as being a Texas Ranger.

Specifically, it showed his wallet, with a Texas Ranger badge. 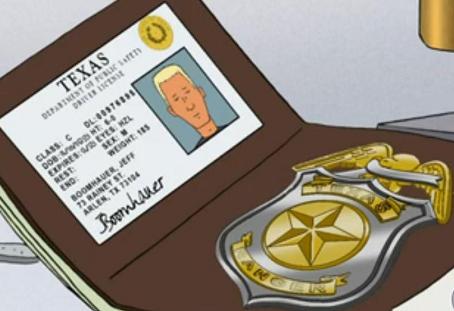 Was he really a Texas Ranger though, or was this just something he used to get ladies?

It seemed to me like he couldn't be a Texas Ranger for several reasons:

character king-of-the-hill
|share|improve this question
asked May 26 '16 at 1:42

8
Was Trevor really insomniac for a year?
2
What really happened to Dr John Woods?
4
What was Cotton Hill's job in the military?
4
Was Kris Kringle really Santa?
61
Was Thanos really committed or just a hypocrite?
3
Did Cliff Booth really do this?