What is this camera effect used in Hot Fuzz?

In this scene in Hot Fuzz (2007) the camera focuses on these two characters and rotates slowly, but the background rotates so fast. So what is this camera effect and how is it accomplished?

Timeline of this effect in the movie is around 97:46.

I'm joking, but as far as I can tell the technique doesn't really have a name. All that's happening is that the camera is moving around subjects in the foreground, and the background appears to move quicker thanks to the simple fact that it's further away.

The reason I refer to it as the Michael Bay Spin is that director Michael Bay has used this exact shot (with different actors/locations, of course) in a lot of his films.

In fact, the inclusion of that shot in Hot Fuzz is a direct reference to Michael Bay - Bad Boys II (directed by Bay) is bought up earlier on in the film, and if I remember correctly, the shot in question is actually shown to the audience while Nicholas Angel and Danny watch the film at Danny's house.

TV Tropes refers to it as an "orbital shot" which somehow seems more appropriate for describing the technique.

You can find this technique in Walt Disney's Snow White and the Seven Dwarfs when the queen drinks the potion transforming her into the witch - obviously they're not rotating the camera, but the actual painted cel backgrounds themselves, but the effect's the same.

This can be called as Michael Bay spin because Bay uses this technology.

Bay utilizes a 360 shot that has the camera slowly spin around one or more characters (usually the protagonists) as they come up from below frame. One of the first uses of it was in 1995's "Bad Boys" starring Will Smith and Martin Lawrence. Bay used it again a year later with Nicholas Cage in 1996's "The Rock."

According to a behind the scenes featurette for the film, Bay used the spinning shot to attempt to show both sides of the shootout without cutting away.

Bay spun the cameras around the different rooms and then digitally added in the doors.

The shot has been noticed online by many (YouTube channel ScreenJunkies compiled a supercut of the shots), and while some don't find his work to be anything special, Bay isn't too worried about what the critics have to say.

I would classify this as a variant of parallax:

"Parallax is a displacement or difference in the apparent position of an object viewed along two different lines of sight, and is measured by the angle or semi-angle of inclination between those two lines." 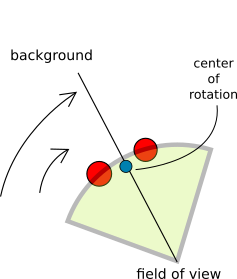 Because objects in the background move a larger distance onscreen (and they are out of focus), motion blur is achieved.

2
What's the first movie to have the "Michael Bay Spin" in it?

18
Zoom actor in while background out? How is this effect called and made?
3
Camera movement in final scene of 'Into The Wild'
14
Why did Peter Jackson and Cate Blanchett take small uncredited roles in Hot Fuzz?
10
Is there any story link between Shaun of the Dead, Hot Fuzz, and The World's End?
2
What's the first movie to have the "Michael Bay Spin" in it?
10
Camera technique where crowd moves fast around a stationary character?
22
Why is Skinner so awkward in Hot Fuzz?
5
Was the slightly shaky camera effect done "In the edit" of the Kingsman movies?
11
What is this video effect where there's a square on the left side of the frame?