What is the significance of the mute girl in The Seventh Seal?

The character credited as the 'Mute Girl', exclaims 'at last' (or words to that effect) as Death enters Block's castle. Is this an obvious reference to the inevitability of death, or does she know something else?

I have read a fairly vague answer that she is the personification of the plague - is this a fair assessment?

The significance of her words are religious in nature.

From Peter Cowie's audio commentary in Criterion's special edition of the Seventh Seal (1957) DVD, here follows a transcript of an excerpt of the audio commentary, commentating over that final, relevant scene:

COWIE: Now the girl drops to her knees and finally, after what feels almost an entire life of muteness summons the strength to say, "It is finished", the words of Jesus Christ on the cross. 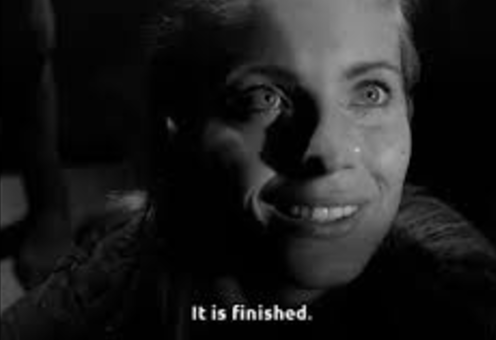 Indeed, if we take a look at the Bible:

After this, Jesus knowing that all things were now accomplished, that the scripture might be fulfilled, saith, I thirst. Now there was set a vessel full of vinegar: and they filled a spunge with vinegar, and put it upon hyssop, and put it to his mouth. When Jesus therefore had received the vinegar, he said, It is finished: and he bowed his head, and gave up the ghost.

Later, Cowie goes on to say:

COWIE: [Jof] glances back from the shore towards the hills and suddenly he'll see the dance of death, and he reads out the names of the people. The Smith and Lisa, the knight, Raval, Jöns and Skat. 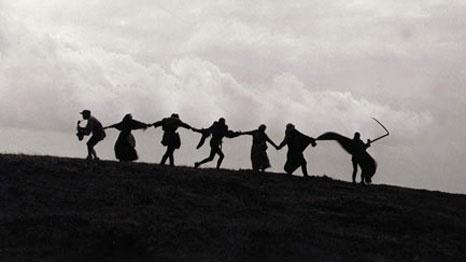 And there's been a lot of debate about this. Why isn't the knight's wife there, for example? Raval seems to have taken her place. And the girl is not there, either, which is perhaps to be expected because she's always had an otherworldly quality, a kind of spiritual grace.

While Jof, Mia and their son represent Joseph and Mary (Jof is short for Joseph), and they're granted a moment of distraction for Death by the knight, in order to escape death (a Crusader's sacrifice for the Holy Family), if we keep looking for religious symbolism, we can see that the girl's muteness was used to have the camera lurking on her, without her speaking or doing much, in order to cause an "otherworldly" affection – this, plus it makes her first and only words, during the last shot of the castle, "It is finished" all the more impactful.

Some have argued that her opening her mouth and speaking for the first time represents the opening of the titular seventh seal:

"When he opened the seventh seal, there was silence in heaven for about half an hour."

Not the answer you're looking for? Browse other questions tagged plot-explanation character ending the-seventh-seal .