Explanation on the condition of Wolverine

Does Wolverine forget everything in X-Men: Apocalypse while being experimented on as Weapon X?

I mean I didn't hear properly when Jean said something about his Amnesia and memories and did something. He did not recognise her whereas she read his mind?

Could someone explain the entire scene and what happened to him in the facility?

Logan was brainwashed and programmed to become a killing machine by this timeline's version of the Weapon X program. This includes the repression of personality and memories, to make him a more pliable weapon. The helmet, electronics, and chemicals (tubes in his stomach) put him in a Berserker mode, with the helmet causing him to hallucinate as Stryker and the doctors want him to. It's lifted wholesale from the original Weapon X story arc by Barry Windsor-Smith in "Marvel Comics Presents #72-84 Weapon X", unlike the butchered version in the Origins film. 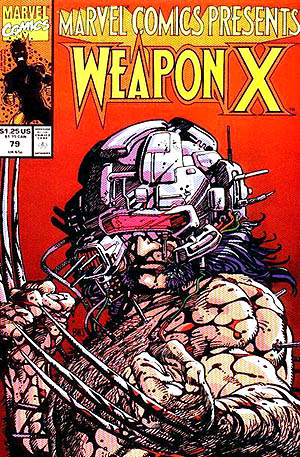 In the first few pages into Logan’s abduction, we see that he is constantly being fed tranquilizers and other mind-dampening drugs. The reader is informed that the scientists have chemically and psychologically stripped Logan of his humanity and have reduced him to an animal. This is a theme seen through Wolverine’s storylines; the idea that he is more of a raging animal than a rational person. Windsor-Smith provides an antagonist that readers can truly hate in Logan’s defense. Thorton pulls no punches in Logan’s treatment. He has Logan stabbed with tubes and needles, turning him into a mutant pincushion.

In this timeline, at this point of 1983, Wolverine has never met Jean or Cyclops before. Jean, using her powers, unlocks some of Wolverine's mind, allowing him to return to the man inside the beast.

[Jean Mentally to Logan] "Logan".
[Wolverine removes his plugs, leaves]
Scott: What did you do to him?
Jean: I found a piece of his past and gave it back to him. Just a few memories I could reach.
Scott: I hope that's the last we'd seen of that guy. [Rimshot]

In the original timeline, they first meet in 2000, when Jean is already an adult teacher at Xavier's school.

The memories she unlocks are the ones Wolverine loses of his past before the Weapon X program. The same ones that Jean and Xavier attempt to help him remember in the original timeline in X1-X3. The same ones that he lost because of the adamantium bullet in Origins. Not memories that he had from the time travel in DOFP.

The biggest problem is DOFP, and it's "good ending". In DOFP, when Wolverine's mind is sent to the past, it only stays there as long as Kitty Pryde/Rogue can keep him there. Once she lets go, the time travel events are set, and Wolverine's mind returns. As he says at the very end of DOFP to Xavier:

This means the Wolverine in 1973 returns to his original memories. He keeps nothing. But the Wolverine in the "good ending" of 2035 suddenly forgets everything in the new timeline, and remembers the old timeline.

In any case, that means the Wolverine in 1983, in Apocalypse, has no memory of the old timeline, of meeting Jean in X1, the year 2000. He's completely unaffected by the time travel.

What happened to Wolverine?

He has been experimented for the Weapon X program and shows some memory problems/some kind of amnesia.

He did not recognise her whereas she read his mind?

He didn't recognise her because they never met before. In the old timeline they first meet during X-Men but now in the new timeline they meet each other way before. And after Wolverine's concision to go back to the future in DoFP, he didn't know about this old timeline.

The full scene goes like this; Jean and team just rescued an unknown mutant (Logan) and he goes on a killing rampage to Stryker's people till Jean tries to calm him down and returns some of his lost memories (to unknown extent at the moment). And then he runs away from the location.

He didn't recognise her because this was the first time he'd met her.

If you're asking why he didn't recognise her in the "future" (in the first X-Men movie), that's because the timeline has been altered.

Jean managed to break through some of his amnesia, to give him back some fragments of memory. You hear a whisper of "Logan" when she is doing this.

8
Adamantium and healing in The Wolverine
5
Ending to Memento
3
Why do Xavier and Magneto meet Wolverine in "The Wolverine (2013)"?
17
Which Wolverine Existed During the Time Gap?
4
Is Logan no longer the Wolverine?
7
Where was Wolverine running to, after he escaped?
5
Does Leonard really have memories before the incident?
2
Future Diary plot explanation, in regards to the winning condition