Is the Reimagined Battlestar a reboot or a sequel to the Original Battlestar?

The Reimagined Battlestar started as a remake, or reboot (no real difference) to the original Battlestar Galactica. Due to changes in audience expectations, it was grittier, more realistic than the original. No preachy moral of the week or happy go lucky attitude, light on the reset button, no kid and his dog bot. It has obvious changes, as the Cylons were now human creations who rebelled, instead of creations of a Lizard species of the same name.

But Battlestar has a reoccurring theme of "All of this has happen before, and all of this will happen again". The myth in the series says that there was an original planet, and a war. They escaped to form colonies. The main 12 colonies are destroyed, and a 13th colony that once was lost is found. And then the cycle starts again.

So they form doubt on whether it's a reboot or a sequel. They imply that the original happened some cycles ago, and the reimagined series is another cycle of the same. Keep in in Galactica 1980 had the Battlestar Galactica crew finally find the 13th colony, Earth, And one episode had an android, a human formed cylon. In the reimagined series, they have one part where old school Cylons are seen, the Cylons Centurions used in the old series.

Furthermore, they also state (a bit more than just imply), that one girl in the new series is mitochondrial eve to real life us. Edward James Olmos has also jokingly implied that Blade Runner is a sequel to the new BSG vis-a-vis his character and Replicants in that movie but that's beside the point.

Question is, is there an official, word of God statement that the reimagined series is a sequel, in-universe? That the events of the old series actually happened and are in continuity?

I don't think it can be a sequel as both series show the destruction of, and evacuation from, Caprica and its colonies. The final episodes of the new series show that the phrase "all this has happened before..." refers to the fact

the same thing that happened on Caprica (uprising of robotic servants) also happened on Kobol and Earth. In fact, the Final Five left Earth to try to warn the other colonies to not make the same mistake, but the Cylon war was already in progress when they arrived.

The implication of the final aired episode, "The Hand of God", was that the original series took place after the Apollo 11 moon landing in July 1969 (as the Galactica receives a television transmission from Earth showing the landing) https://en.wikipedia.org/wiki/Battlestar_Galactica_(1978_TV_series)

Take away those references, and it's another deal all together, and there's no reason why it can't be a sequel set in another occurrence of "all of this has happened before..."

and conveniently "closed" for a repeating cycle of events... supposedly

While both TV series seem to be set within their own universes, there is a more recent 2017 comic miniseries series Battlestar Galactica vs Battlestar Galactica that imagines the crews of both series (and respected Battlestars) to come into contact and interact with each other! It's unclear if this particular comic line is canon, but it does manage to find a way to squeeze in the possibility of it, even though many might think it's a stretch, but it relies on the idea of alternate reality, time travel, or parallel universes.

The ultimate showdown has begun!

When a compromise can’t be reached, distrust has reached its peak, and the crews of the Galacticas square off in battle, pitting hero against hero!

The fury of the Battlestars unleashed upon each other unless the treachery set against them can be discovered in time! 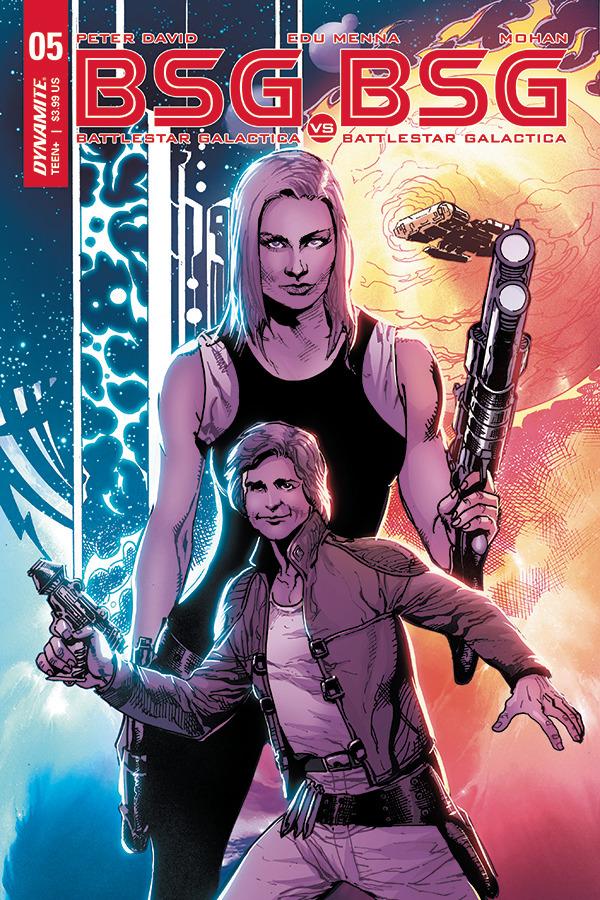 Note: Some would dismiss this in the 2004 series outright, but IMO if you look what was going on with Kara when she went through the nebula, the result is 3 different outcomes: Lee saw Kara's viper explode, Kara came back in a new replica viper and knows the way to the first Earth, and once on Earth (1), Kara discovers her charred body and viper had crashed landed. Temporal anomalies indeed were hinted at. (Let alone how the replica messengers of Caprica/6, Baltar, and Zoe (Caprica) could exist).

Not the answer you're looking for? Browse other questions tagged analysis continuity sequels battlestar-galactica reboot .

32
Can I watch Battlestar Galactica 2003 without knowing the original 1978 series?