What was the significance of recreating the fire scene with Daenerys?

What was the significance that the same kind of scene which existed in season 1 was recreated back in season 6? Was there any significance of filming it in the same way? 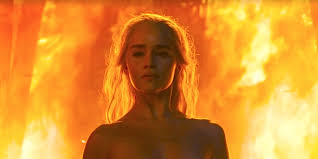 Within the world of the show: It's being speculated (example) that this might be a nod to some prophetic mutterings about Dany's future. However, those specific prophetic mutterings were only in the books, not in the TV show, so I'm putting them in spoiler blocks for people who've not yet read the books. Here they are:

In A Clash of Kings, Quaithe, the mysterious woman in Qarth with the wooden mask, tells Dany:

"To go north, you must journey south, to reach the west you must go east. To go forward you must go back and to touch the light you must pass beneath the shadow."

She's already gone East, so it looks like this could be the going back to go forward - going back to where her personal adventure arguably started (where her brother died and she became next in line, and started acting independently), repeating something from her past (burning Khals) with opposite results (gaining, not losing, a Dothraki horde).

You might well not remember that character, who did appear in the TV show but only with a minor role. However, the character is easy to recognise: 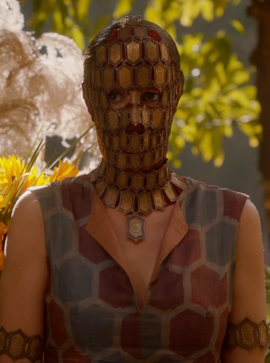 The TV show often includes little nods to details in the books that it doesn't include explicitly, that people who've read the books can pick up on but which don't disrupt or divert the narrative for those who haven't. For example, in the TV show, the first thing Robb Stark and company did on arriving at Walder Frey's was to nervously eat and pass around bread and salt, before making themselves comfortable. This had some significance for people who'd read the books, but to everyone else just looked like they were hungry and receiving basic hospitality after a long journey and didn't distract from the dialogue.

Out of universe: this is what the writers said in the Inside The Episode featurette:

The end of episode 6x04 was definitely meant consiously to echo the end of episode 1x10. It's Dany stepping out of the flame to great effect. This time it was just on a much, much larger scale.

So it was done on purpose and they wanted the viewers to notice the similarities between the two "unburning" acts. Later they explain that in Season 1 only a few people witnessed everything, while now all the Dothraki people were struck by Daenerys greatness. It seems that they were aiming at pointing out the difference in scale of the both events.

Interestingly, this wasn't the only scene in this episode that echoed a scene from previous seasons. Theon's coming home looks almost exactly the same as in Season 2, only now it's Yara, not Balon, waiting for him.