Why does Sheldon not stop Leonard from sitting in his spot on the couch?

From first episode of first season of The Big Bang Theory, it is shown that Sheldon has an attachment to his spot on couch and does not let anybody sit on it. However, in Bat Jar Conjecture, we can see Leonard sitting in his spot and he was on chair. How come he does not stop Leonard from sitting in his spot? 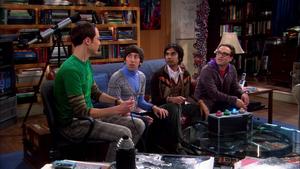 There is another instance. In first episode of season two, Raj was sitting in his spot.

In the Earworm Reverberation, he says that he is very protective of this while making a video. We have clearly seen him show utter intolerance when anybody tries to sit there. So, why does Sheldon not stop Leonard from sitting in his spot on the couch?

In the episode: Bat Jar Conjecture, Sheldon is indeed trying to replicate his desired sitting arrangement of his team at the upcoming Physics Bowl.

It is to be noticed that, he tries to assert himself as the team lead and Sheldon is known for practising/enacting things exactly, especially before important events like the Physics Bowl here, themed costume parties(remember that he even wears a linen underwear for a renaissance themed costume party).

[When you're bossing around, you generally try to stand tall or sit on a higher pedestal with a straight back, and Sheldon does exactly that. (Appreciate the direction)]

6
Does Sheldon Cooper really care about Leonard Hofstadter?
15
What happened to Penny's pharmaceutical sales rep job?
14
Why does Sheldon Cooper love The Flash?
4
Why didn't Sheldon monetise the idea/concept of luminous fish?
9
Why does the Stevenson Award show "Sheldon Cooper Ph.D." when he got his Ph.D. at 16?
2
First Big Bang Theory episode with none of the guys in pre-credit sequence
2
Where does Sheldon hide the Golf Ball in TBBT S09E19?
0
Why didn't Sheldon provide his references for sports statistics to his dad and meemaw?
13
Why does Young Sheldon behave like an adult while Adult Sheldon behaves like a kid?
2
Why does not Sheldon use Taxi Cabs for his Transport issues?