In the movie Captain America: Civil War, Black Widow told Bucky: "You could at least recognise me". What does that mean? Did they know each other during WWII?

The first time Bucky tried to kill Natasha was when she was on a mission with SHIELD.

Five years ago I was escorting a nuclear engineer out of Iran, somebody shot at my tires near Odessa. We lost control, went straight over a cliff, I pulled us out, but the Winter Soldier was there. I was covering my engineer, so he shot him straight through me. A Soviet slug, no rifling. Bye-bye bikinis.

The second time is in Captain America: The Winter Soldier, after Natasha, Steve and Sam have interrogated Agent Sitwell for information. There is an extended action sequence set on a motorway and an underpass that sees Natasha struggling to stay alive against Bucky.

Her line of "You could at least recognise me!" when they fight for a third time in Captain America: Civil War is simply a joke about how, despite having nearly killed her three times at this point, she seems to be mostly irrelevant to him, as she has never been the primary target in any instance - merely an obstacle to get past before his actual mission can be completed.

He has nearly killed her at least twice.

As explained in Captain America: The Winter Soldier, Black Widow was on a mission protecting someone when the Winter Soldier showed up and shot a bullet through her into his intended target.

Later in the same movie (meaning Winter Soldier) she and Captain America fought him out on the freeway and in the lower side streets (He stalked her). 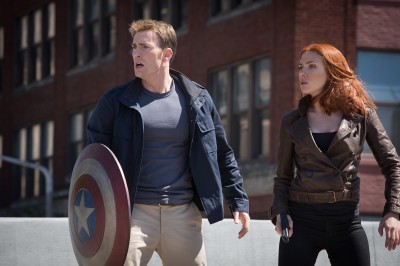 So that is at least two times prior to Civil War they had met, although neither were exactly on good terms.

I believe her comment refers to how Bucky has managed to avoid recapture by Hydra and the inevitable mind wipe that will follow.

As we know from Winter Soldier, Bucky is kept frozen and is occasionally defrosted for special missions, accompanied by hypnosis to compel him to obedience. When he originally meets Captain America, his oldest friend, he originally doesn't recognize him, or at least is incapable of expressing it and acting on it - he's a brainwashed soldier, and it takes him the rest of the movie to shake off the conditioning.

So when Natasha says "at least you recognize me", after he's met her at least twice before, she's saying "you've avoiding reverting into a psychopathic killing machine. Good for you!"

While fighting the Winter Soldier, Black Widow asks him - "Do you even remember me?". Referencing the Soviet Scientist she was guarding when shot by the Winter Soldier. However, this may reference a storyline in the comics where they were romantically involved, or the story she told in Captain America: Winter Soldier of being shot by him while in a mission.

Not the answer you're looking for? Browse other questions tagged marvel-cinematic-universe captain-america-civil-war .

5
What is the significance of Black Widow saying “You could at least recognize me” to Bucky?

24
What did Captain America mean after being kissed by Black Widow?
23
Why did Black Panther change his mind?
2
Explanation on Zemo's plan
15
Was Steve Rogers supporting Bucky by lying?
8
Why is Black Panther addressed with “Your Highness”?
54
How does Captain America know about Iron Man's parents' fate?