Why does Captain America chuckle when Spider-Man tells him which borough he's from?

Captain America: You got heart, kid, where are you from?

I don't understand the real meaning of this conversation. Is it supposed to be funny? Is the "Queens" and "Brooklyn" means anything different here?

dialogue marvel-cinematic-universe captain-america-civil-war
Share
Improve this question
edited May 11 '16 at 9:15

Although the other answers may be right when they say that it's a reference to the longstanding Brooklyn/Queens rivalry, as a native New Yorker, I think it is simpler than that. 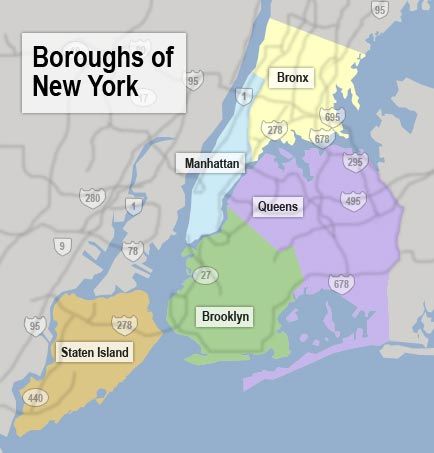 In the geography of New York City, Brooklyn and Queens are neighbors. They're both located on the western tip of Long Island. 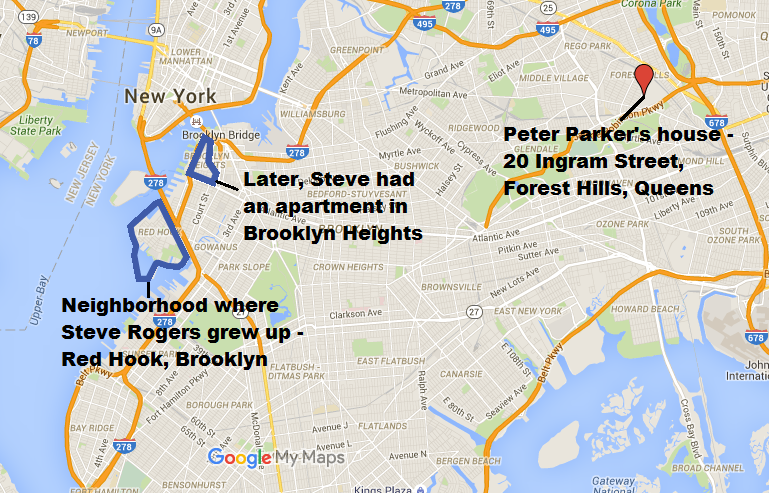 As we can see, Peter1 and Steve2 have lived most of their lives less than 10 miles apart from one another.

It sounds like Steve's reaction to hearing that Peter is from Queens is simply a "Hey, we're neighbors!" kind of thing, not a reference to any deeper significance.

1 For those who are interested, here's 20 Ingram Street, Spider-Man's house. A family named Parker lives there in real life, and their next-door neighbors are the Osbournes 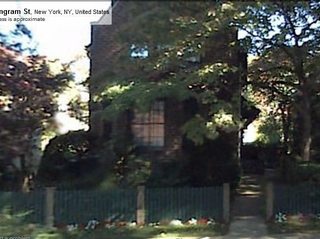 2 Unlike Spider-Man, Marvel never gave Captain America a real-world address. We know he was born in Red Hook, Brooklyn, but we don't know where. He later moved into an apartment in Brooklyn Heights, but the apartment address - 569 Leaman Place - doesn't actually exist.

It's just to show us that Steve and Peter have a natural rapport, even when fighting on opposite sides. This is likely just intended to be set-up for a later film when they will be required to work together; establishing a common ground (such as the fact that they both come from New York) early on helps that relationship build naturally.

It also plays into a joke in the second post-credits sequence;

When asked by Aunt May how he got a black eye, Peter replies "From Steve". Aunt May asks if it's a Steve she knows and Peter says "No, he's from Brookyln. And his friend was huge. Like, huge". The joke here is that Peter is 100% telling the truth, even if Aunt May can't possible know what really happened from his line.

Lived all my life in Queens. There's a bit of rivalry/respect between Queens and Brooklyn. Kevin Smith pointed out in his podcast that Cap most likely recognized Spidey's New York/Queens accent even amidst fighting all the way in Germany.

I saw the movie in Astoria, Queens. It was definitely a crowd-pleaser moment. 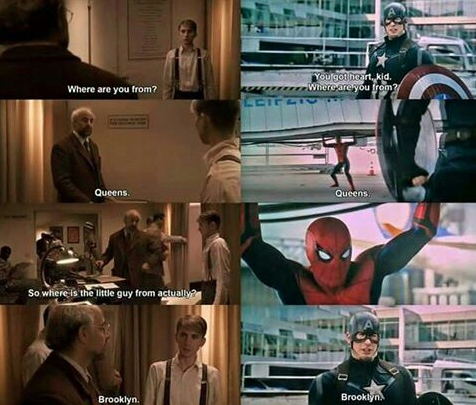 I found this on instagram and was amazed to see the reference (backward compatibility).

Adding to all the good answers and as @michael also mentions, it's a reference to the first Captain America movie.

Another example is the last fight scene between Cap, Bucky and Iron Man, in which Captain says,

I can do this all day.

This exact same line was said by Steve (he wasn't Captain America yet), when he was being bullied in the first movie.

You got to be from New York City to understand that reference. I'm from New York and that's my favorite line in the film; in fact in the entire MCU. It's a very local thing, specially if you were born or raised in New York City. For example if you grew up in Brooklyn, you never hung out in Queens, etc.

It's very simple. Stop reading too much into it.

I'm from New York. If I'm in an airport in Germany, and I ask someone where they're from, and they reply "Queens", the odds of meeting another NYC resident would be rare, so a chuckle and disbelief would be about the right reaction. So Steve is basically acknowledging the innate New York brotherhood and Spider-Man's heart, basically saying, "Hey you kick butt. Oh you're from Queens? That's cool. I kick butt too, neighbor, I'm from Brooklyn!".

It's not about "superiority", Brooklyn over Queens, so much as it is about the rivalry and the fact that they're fighting (Queens and Brooklyn) literally on the OTHER SIDE IF THE WORLD and the rivalry STILL rears its head. That's what makes it funny.

But if you didn't perceive that then it's probably "a New York thing".

Not the answer you're looking for? Browse other questions tagged dialogue marvel-cinematic-universe captain-america-civil-war .

22
What happened to the third post credit scene?
4
How can Spider-man lift the Winter Soldier's metal hand so easily?
16
Eye part mask of Spider-Man and Deadpool
2
What is this net in the big airport battle?
7
Why doesn't Spider-Man look like an adult in Captain America: Civil War?
5
Why did Doctor Strange say that his job is "protecting the reality" to Iron man?
24
Is the conflict between Captain America and Tony Stark in "The Avengers" Blue Collar versus Educated Elite?