What were the magic words used by Zemo and what's it referring to?

In Captain America: Civil War, Baron Helmut Zemo used some magic words to activate the brainwashing of the Winter Soldier. But these words seem a bit weird to me at first glance, I only remember one word which was "Homecoming", looks like a nod to the upcoming Spider-man film. But what were the whole list of activation magic words and what were they referring to?

marvel-cinematic-universe reference captain-america-civil-war
Share
Improve this question
edited May 31, 2016 at 6:23

The trigger words, translated/subtitled from Russian into English, were:

No exact explanation has been given what the words actually reference, but hypnosis typically involves words and phrases in sequences that are unlikely to be randomly said in order.

You would think that "homecoming" is an out-of-universe nod to the upcoming Spider-Man: Homecoming, but the screenwriters dismiss that that connection being made as "fairly accidentally".

Additionally, Bucky fell from a freight car when he was lost and presumed dead. Finally, Bucky was born in 1917 (one, nine, seventeen) 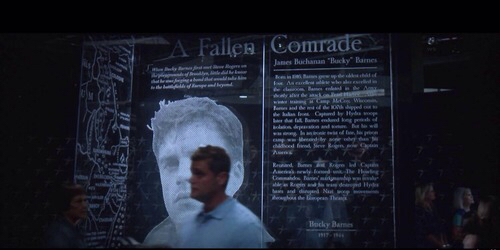 As phantom42 says, the words likely have no specific meaning other than being random words that are unlikely to be said in that exact order or in the same sentence.

Buckey has basically been brainwashed by Hydra, and when issued these ten specific words, in this order, will respond to whatever command he is issued next without question, and will die trying to carry it out.

This is a reference to the novel The Manchurian Candidate, which has been made into two films (1962, and a 2004 remake). In the story, a character has been brainwashed into being controlled when a triggering item or phrase is uttered.

Tony even makes a reference to this late in the film when he encounters Cap and Buck in Siberia, when Buckey continues to keep his gun focused on Tony, causing Tony to reply:

Tony: Manchurian Candidate, you're killing me. We're on a truce. Put the gun down.

The words may have some kind of meaning revealed in later movies and material related to the MCU, but for now it's simply reusing a plot device from older films as a means to explain why Buckey can be controlled by anyone saying these 10 words, whether they're part of Hydra or not. This further explains why Buckey opts to be placed in cryo at the end of the film until they can figure out how to "de-program" him, considering himself too much of a risk until such a time.

These were not magic words so much as more of a passcode. Winter Sldier is what we call a sleeper agent. He was brainwashed, trained by multiple government military groups, brainwashed some more, trained as a spy and then brainwashed some more. He is the single most highly trained military figure in the world. Although the first successful Winter Soldier was a good man, due to the circumstances of his training he is a neutral party, one who will only act on behalf of the individual who speaks the combination of trigger words (in any language) as Winter Soldier will respond in whatever language he is activated in.

Theoretically every Winter Soldier would have different activation words. And as was stated in previous comments these words have no meaning what-so-ever. They are simply an uncommon series of words used, by the people who brainwashed him, as a passcode to prevent others from controlling him. (Or her if you read some comics, I believe there was a female Winter Soldier in one or two of them.)

Not the answer you're looking for? Browse other questions tagged marvel-cinematic-universe reference captain-america-civil-war .

15
What were the other A.I. chips and whom are they referring to?
4
Why was Ant-Man excluded from the Civil War trailer?
30
Wasn't Iron Man smart enough not to fight the Winter Soldier?
3
Was the Winter Soldier inspired by Sky High?
31
When is Doctor Strange actually set?
1
Who kills T'Chaka, one of the original Black Panthers + father of the current Black Panther?
4
What is the device used in Captain America: Civil War to disable the electical substation?
1
Is there a canonical reason as to why Bucky got "nerfed" throughout the MCU?