What is written on the mini-bus?

In Season 5 The Office (US version), Episode 23 - Broke, at the beginning we see a minivan and on the side is some Korean text: 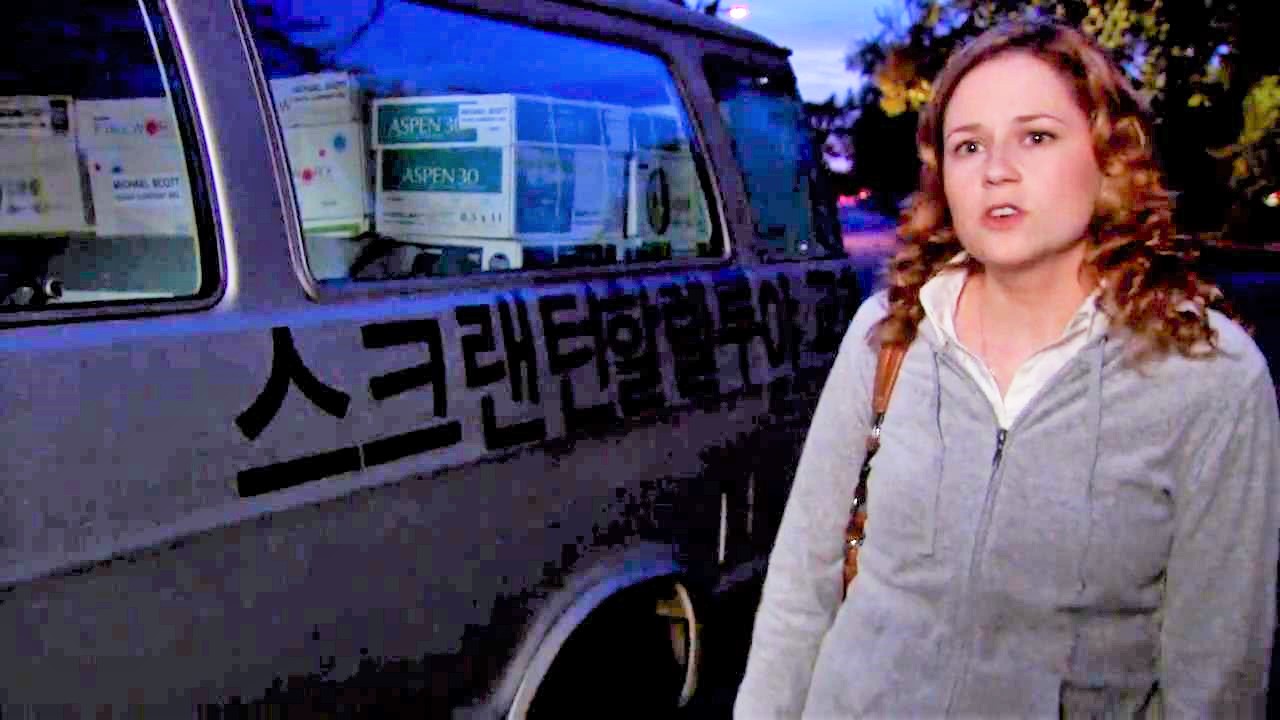 but does anyone know what it really says? sorry I had to increase the brightness and shadow highlights in order for the text to be legible.

translation the-office
Share
Improve this question
asked May 4 '16 at 20:53

According to wikipedia (and Entertainment Weekly) it says "Hallelujah Church of Scranton".

''We got the van at a used car lot,'' Pam told us. ''We think it says 'Alleluia Church of Scranton' in Korean.''' I'm going to leave it to one of you Korean-reading Dunderheads to verify this, but given how the rest of the episode played out, let's assume that's accurate.

The sun was coming up, and Pam wondered if Michael by any chance brought coffee along for their delivery voyage. ''Milk and sugar,'' he said, and handed her a gigantic travel mug. She took one sip and made a disgusted face. ''Is this just milk and sugar?'' I think the best part of this whole exchange was Ryan's strangely intense stare.

Ryan, Pam, and Michael were unloading boxes in a client's parking lot — do most businesses get paper delivered so early in the morning? Can they not accept deliveries during the day? Hmmm... — when a Korean woman headed for the van. ''It's not for the church!'' Pam shouts. ''It's a paper company now.'' Pam knows how ridiculous she sounds, but in another stand-out episode for Jenna Fischer, she's also trying to keep it together.

It literally says "Scranton Hallelujah Church" on it. The "Scranton" and "Hallelujah" are spelled phonetically in Korean characters and the "Church" is the Korean word we Americans would pronounce "Gyo Hey". Every set of characters in Korean is a different syllable, in a way, and the Korean language doesn't ever put 3 consonants together in a row, so the first 4 sets of characters on the van says "Su" "Ku" "Ran" "Ton". The remaining characters says "Hallelujah Gyo Hey"

Not the answer you're looking for? Browse other questions tagged translation the-office .

4
What did the legal advisor say in The Hitman?
9
What does the “keleven” digit look like?
6
Why didn't Michael Scott appear in the Q&A panel in the Finale episode of The Office?
4
What is Creed from The Office
5
What is written on the wall in this scene of The Danish Girl?
3
What is the proximity of the camera to the interviewee in The Office?
2
What is Toby's Troops in The Office?
8
Was the cast of The Office aware of secrets told on Screen?
6
What can be said of Creed getting the security guard's name right?