Woman in red from The 100 connection to Matrix

Was the "woman in red" character inspired by Matrix or at least is there any similarity/connection?

There is some speculation, but producer Javi Grillo-Marxuach said there is no connection between ALIE's (Lady in Red) VR City of Light, and the Matrix Blue/Red Pill. 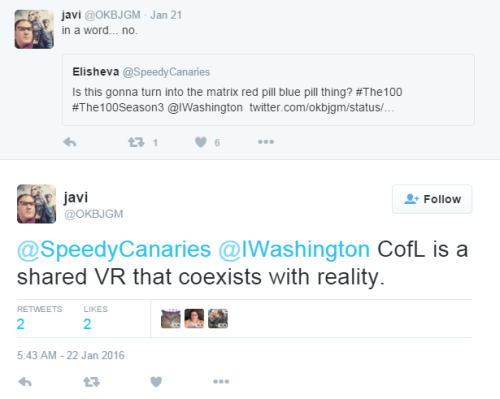 It's hard to imagine that the entire Season 3 plot isn't somewhat inspired by the Matrix, but the Matrix isn't the first to do that in general. His tumblr says the same:

The similarities may be superficial, as Women/Lady in Red are common ideas. See the disambiguation pages for both The Woman in Red and The Lady in Red, or any study on the Red Dress Effect:

So potent and enduring is the “Red Dress Effect” that behavioral psychologists have studied it—and demonstrated that women who don red are not only regarded by men as more physically and sexually attractive, but also tend to have more money spent on them. In fact, the dating site OKCupid discovered that women wearing red in their profile photos have a greater statistical chance of being asked out.

Ok, this is my theory.

So in short, the 100 is the begining of all this. My prediction is that, to beat Allie 1, who struck first and destroyed the world, answers the question who shot first from the movies, and by the way, the 100 will use the second matrix. Once in the second matrix, the "commander" will inform clarke that the AI is linked to the whole planet via the internet and solar panels.

Unfortunately, the second matrix is not a perfect place either. In the second attack, the 100 and grounders use AI 2 to launch ancient weapons to block the sky. This was all part of AI1 plan all along as her conciousness will merge with the commander's when it finally is upgraded. With both the sentient and computer based AIs in Matrix 2, it becomes unstable, exposing the first 'Neo', and showing the one now known as the gate keeper and creator the flaw with the first two matrices. That humans die without suffering and the AI will die without humans.

The show ends with the first humans being put into battery pods as well as a few select people who refuse the first pill being imprisoned (so to speak) in Zion by the AI. The matrix itself then utilizes 'latent memory' to rebuild civilization in a light where humans exist eternally at the point prior to the AI being created.

Ultimately, the two become symbiotic and one not being able to live without the other. This show is or easily can be used to explain all the things the Matrix movies never did. Hence why the second AI looks like the tracker they pull out of Neo. Now Neo is the residual conciousness of all the previous human commanders that never desired for humanity to be stuck in such a limbo. The agents on the other hand are the first 'chipped' people from the first matrix who are now completely part of the matrix.

Hence why agents can take anyone's body at will-- only if they are submissive just like Allie, saying how she can't get past 'free will'. Neo, Morpheus, and Trinity are in fact the central feature continued out forever, because Morpheus is the reemergence of the human Version of the Chancellors; Trinity the commanders of the 100; and Neo the commanders of grounder nation. The mountain men are the last members of the people from the Mad Max films.

So my theory is as such. Mad Max series is the prequel, Matrix Series the finale, and The 100 to give the whole thing a linking storyline from apocalypse to eternal life. The Mad Max link is easier to see, blood-bags in mount weather, reapers made by the blood-bag leadership, radiated soil and massive wastelands. Also Charlize Theron's charcter at the end easily can be seen as the first leader of the grounders after the banishment of the mutated mountain men relatives.

Not the answer you're looking for? Browse other questions tagged reference the-matrix the-100 .

5
Why is not a single grounder deformed in The 100?
7
Does The 100 have a relationship to/with Battlestar Galactica?
5
What's the time frame that passes in Season 1 of The 100?
5
How was the time-freezed scene in the Matrix with the woman in the red dress shot?
3
In “The 100”, has the issue of the Alpha Station Ring at Arkadia/Camp Jaha tipping over ever been addressed?
5
Was it ever shown how red-pills enter the Matrix (similar to the phone-booth animation when exiting)?
5
Why is Neo's body completely hairless until freed from the matrix?
6
Where do the Nightbloods come from in The 100?
8
What did the red and blue pills physically do in the Matrix?