Why didn't Tommen rescue those arrested in Season 5?

In Game of Thrones season 5, King Tommen' wife, brother by law, and his mother would be finally put into prison for violating sacred laws. Why did he not rescue them?

The army had enough strength to slaughter Stannis's army like pigs but they did not have the strength to kill all those involved in things like this? He became so emotional and angry after they arrested the Queen and her Brother, and he had a soft corner for his mother. And after his mother gets arrested, he simply doesn't eat food to show his protest? Shouldn't he kill all those involved?

Tommen has a lovely heart and many people felt he would be a better king than his brother, but he has a few major weaknesses. He is indecisive, he struggles with confrontation and ultimately, he is a pawn in a game that is much too big for him.

When Loras is arrested, he bursts into his mother's chamber and demands his release. However, his mother is easily able to manipulate him and tells him it is the High Sparrow who gave the order.

When Tommen goes to confront the High Sparrow, the other sparrows block his way - in full view of the people on the street. As they do this, some of these people are yelling at Tommen ("bastard" and "abomination"). He absolutely has his Kingsguard, but with so many people on the street watching (and agreeing with the Sparrows), he would have to order them to cut the sparrows down. He's already unpopular enough, he wants to become popular, not make his situation worse. He could arguably use his army, but in reality those forces are largely under the force of his unstable mother and she wouldn't let him.

So in this situation, realising he faces a militia who refuse to move, whilst surrounded by street people who hate him, he backs down. He doesn't want to slaughter everyone like Joffrey. He just wants Loras back. He believed when he was King he would be able to do good, that he would be wise, as he said to Tywin. However, Tywin is now dead and these people won't respect him - and he doesn't know how to make them. So he backs down, enraging Margaery.

When Margaery is arrested by the Faith Militant, he holds a hand up and deliberately stops his guards intervening: 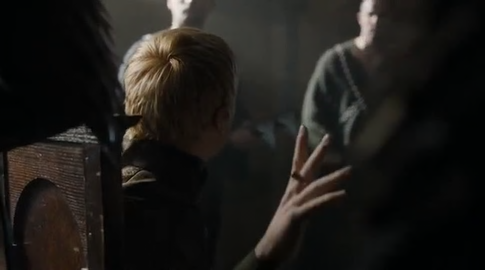 He appears to realise he is outnumbered by the sparrows and has no chance of succeeding. Again, he has no idea how he is supposed to act. Joffrey would never have allowed a situation like the High Sparrow. He would have had the entire sect slaughtered and then slaughtered any commoners who dared argue against it. Tommen is vastly outnumbered here though, and again, on the spur of the moment, has to back down as he realises he can't succeed.

He speaks to his mother about this and she again manipulates him into letting her handle the situation - only for her to now be captured.

This is his mother, the most powerful woman he's ever known, who has been "beaten" by the High Sparrow. At this point, he's totally lost and falls into depression.

If he summoned his army, would they even listen? His grandfather is dead and he doesn't feel he controls the situation. Would his Kingsguard be enough? Would the people hate him more? Would he have to kill everyone to rule?

All of these questions haunt him and he is too indecisive and non-confrontational to deal with them. He wanted to be the wise king. Instead, he is the powerless one.

So to answer your question - arguably yes, he should kill all those involved, or at least show his strength in some way. But he has no idea how, hates confrontation, is aware that "the enemy" i.e. the High Sparrow is far more popular than he is and anything he does would make the situation even worse - and so does absolutely nothing, falling into depression as he realises just how powerless he is in The Game of Thrones.