Why do punches sound like a "slap" in older movies?

Almost all of the of the older movies (from 25-40 years ago) that feature fighting scenes seem to have a very common depiction of a punch that sounds like a slap. I could never understand why did they choose such a sound? I have done martial arts and can confirm that a real punch sounds nothing like that.

Movies were simpler in the past. I'm not talking about the plot, but rather the visual and audio cues. Since the technology (TV and cinema) wasn't as good as it is nowadays, there was no point in adding detail to a move that would never be recognizable to the audience.

E.g. westerns relied on white and black hats to distinguish the good guys from the bad guys. Most TV sets were not in color then, nor did they have the needed resolution to make the actor's faces recognizable in wide actions shots. The hats were a compromise, so that the viewer would not be burdened by having to make difficult distinctions between characters.

Technology is to blame.

This is very noticeable on a visual level. The same principle applies to audio (and I will get back to that), but let's explore a visual example. There happens to be one that I have been talking about this last week.

Compare the set of Star Trek: The Next Generation (1993): 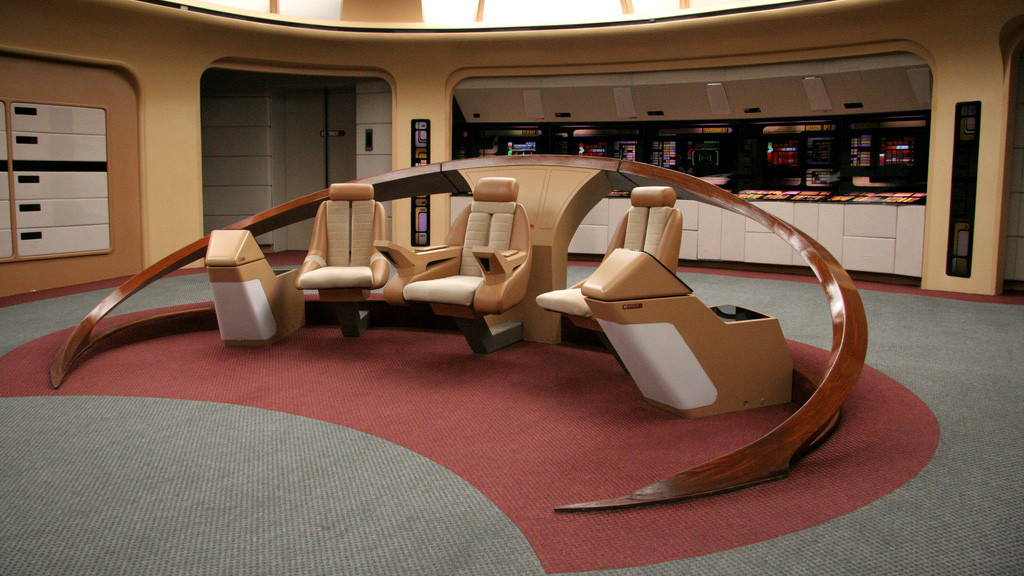 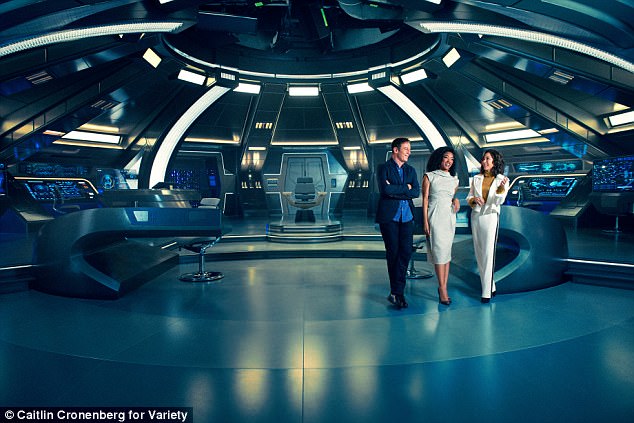 Disregarding the contemporary architectural style of the 90's, notice that there are still some notable differences:

The reason for this is that old TV sets were not able to showcase this detail. Their contrast settings weren't as good as modern day televisions, and their resolutions (and picture fidelity) were notably lower.

This means that the tiny details that you find in the modern set would get lost to someone who is watching the show on a 90's tv set.

Observing with eyes from the past.

To prove my point, I've quickly edited the above pictures to reflect what they would look like. The modern standard is 1080p, whereas standard-definition television was something like 576i, which is about half of the resolution.

I processed both images (quick and dirty in Paint). I scaled them to half of their size, and then magnified the image (so the pixelation is quick to spot) to twice the size. You end up with an image of the same size but only half of the resolution.

Here is the pixelated new set: 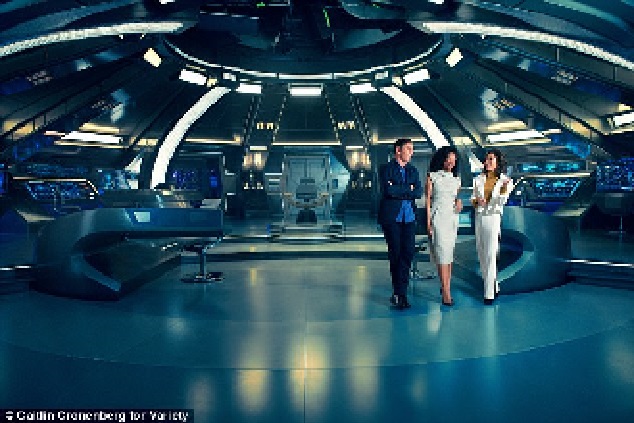 This is ugly. You can't make out the details, and they look jagged. What was once a sharp line is now a blocky mess. This is not acceptable by modern quality standards.

Compare this to the pixelated old set: 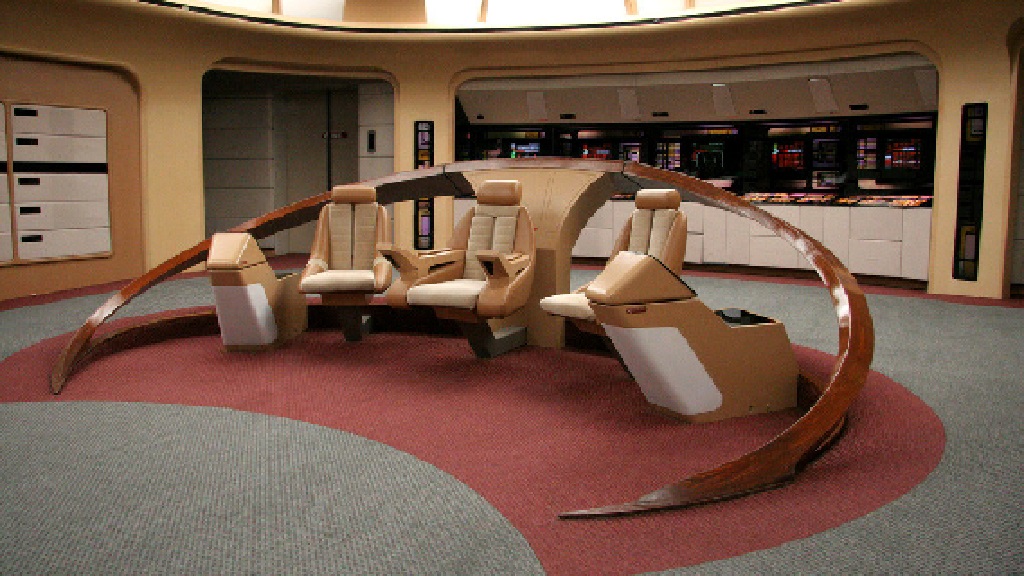 There is still a notable difference when you compare the initial picture with the pixelated one, but it doesn't really look that much uglier. It's a bit fuzzy, but since there are no intricate details to the set, the details do not get lost (or become visual garbage) in a lower resolution.

The same is true for audio.

I said we'd get back to the audio. The principle is much the same here.

Just like how old TV sets had a lower resolution, their speakers were of a lower quality than modern day speakers. This mostly affects the range (high vs low), but old speakers tend to also have a decreased lower range.

This is why we describe an old radio or tv's sound to be tinny, i.e. lacking any real bass.

A thud requires bass. A slap is much higher in tone, and requires less bass.

There is also the element of startling. The sound needed to be loud (relative to the rest of the scene) in order to startle the viewer. But since old speakers had an inferior lower range; that means that you would get better audio quality by playing loud sounds in a higher range (avoiding bass).

Thus, it became better to use a slap instead of a thud, because most hardware would be able to make a loud slap sound better than a loud thud.

Edit
If you watch really old movies, you'll notice that there is little to no background noise when there is an important conversation going on. In modern movies, there is often a lot of ambient noise.

This is the same principle at play. Old speakers were not as good at playing a lot of sounds concurrently (due to a bad range), and any ambient noise would detract from the audio quality of the dialogue.
But since this is no longer an issue for modern speakers, the creators add more ambient noises in the interest of immersion.

This may come across as corrective, but I don't intend it as such. I'm simply trying to give a slight spin to your interpretation.

Your question boils down to:

Why is past media less detailed and less accurate than modern media?

But that's not a fair question. You cannot blame the past for not accounting for future technological improvements. No one would have wanted to spend their budget on getting the audio just right, if the extra detail would not even be noticed by viewers until decades after release. It just doesn't make sense, it's not a wise financial investment.

Instead, you should try to orient your question chronologically:

Why is modern media so much more detailed and accurate than past media?

Technically, it's the same question. But now, you're not implicitly blaming the past for being worse than the present, but rather commending the present for being better than the past.

It's a matter of how you look at it.

In classic movies, sound effects were often pre-recorded or conducted using certain types of items. For example, when the sound of thunder was needed for a movie, quite often one of the stage hands would shake a flexible, thin piece of sheet metal behind the scenes. Certain noises that were common were often expected to be heard during specific scenes ~ just like the ones you refer to. Hope this helps :-)

Not the answer you're looking for? Browse other questions tagged film-techniques sound-effects .

52
Why do old gun fight scenes sound so weird and cartoonish?
13
Has the length of action scenes changed over time?

13
Rooftop contraption used to simulate realistic driving scenes
12
What is the movie term for only seeing what is on camera?
2
Why does TV shows always make a full drink sound like an almost empty one?
43
Why do old movies sound like old movies?
22
Why do most space movies contain sound?
4
Movies with last second twists
6
Do sound effects, specially in horror movies, use emotion initiating frequencies?
3
What is the name for a film that sets up another film?
52
Why do old gun fight scenes sound so weird and cartoonish?
19
Has there ever been a drama film with an unreliable death scene confession?