I've been thinking about something. At the beginning of BTTF 3, when they find Doc's tombstone, it says something about Clara's love... BUT... Clara and Doc would not have met at the time the tombstone was made since she was supposed to go over a cliff and die. They only met because Marty went back to 1885. It was while they were looking for a way to get the Delorean enough room to make it to 88 mph that they saved Clara from going over the cliff. If Marty hadn't gone back to 1885, Doc would not have been anywhere around to save Clara. She would have gone over the cliff and died without them ever meeting. How did her name get on the tombstone? 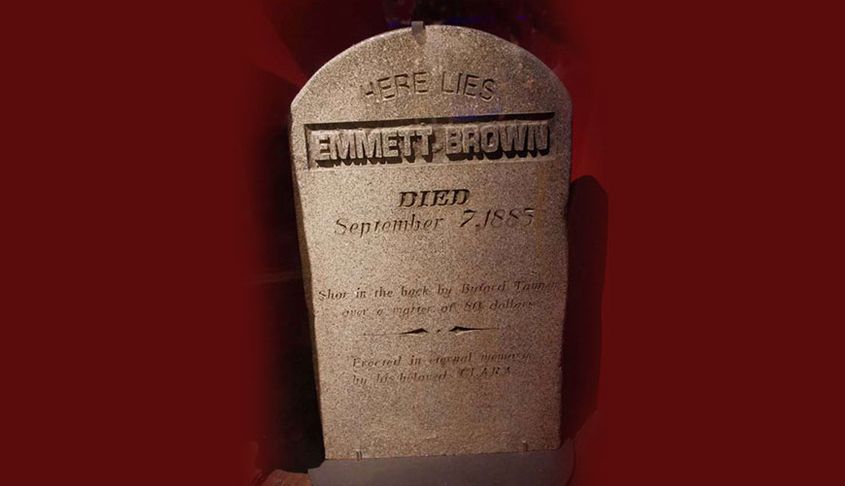 This is covered in the film script;

Mayor: [Coming just inside the door] Excuse me Emmett. You remember last week at the town meeting when you volunteered to meet the new school teacher at the station after she came in?

Mayor: Well, we just got word she's comin' in tomorrow. Here are the details for ya. [He gives Doc a sheet of paper]. Thanks for all your help.

Doc looks up in a state of confusion, putting two and two together. The Mayor leaves before Marty finally speaks.

Marty: Well, Doc, now we know who Clara is.

Doc: [Looking at Marty with a weird grin on his face] Marty. It's impossible. The idea that I could fall in love at first sight? It's romantic nonsense. There's no scientific rationale to that.

The implication is that in the absence of Marty, the Doc would have met Clara at the station preventing her from falling into the canyon. She would have then paid for his tombstone when he got shot.

Obviously this then leads to the secondary question of why the Doc still remembers it as 'Clara Canyon' but there's nothing to say that she couldn't have fallen in at a later date.

Doc had agreed to pick Clara up from the train station, so they would have met there had Marty not gone back in time. (One presumes that in this timeline, the ravine was still called Shonash, but it doesn't persist long enough for us to know for certain.)

The only reason she would have gone over the cliff in the first second third place is that Doc wasn't there to pick her up because he was with Marty instead, so Clara decided to find her own way to town.

Timeline A (neither Doc nor Marty): no one picks up Clara, she tries to ride to town, and goes over the cliff.

Timeline B (just Doc): Doc picks Clara up at the station, she doesn't go over the cliff, and they fall in love.

Timeline C (both Doc and Marty): no one picks Clara up, she tries to ride to town, Doc and Marty stop her going over the cliff, and Doc and Clara fall in love.

46
Why doesn't Marty use the other DeLorean?
8
Crossing your own timeline, changing the future - how does that work?
14
Why don't Marty's memories change?
55
In Back to the Future, how did Marty get the timing right with the lightning strike?
6
How did Marty meet Doc in 1955 after Doc has travelled to 1885?
6
Why doesn't Doc use the DeLorean in order to escape from the Libyans?
8
Where does Doc get all of his money
9
Would the Post Office really deliver a letter decades after postage like in Back To The Future?