Why couldn't the black smoke fly away from the island?

Towards the end of the show Lost, we observe the Black Smoke Monster taking form of a human being in the face of John Locke. It is later revealed that his ultimate plan is to leave the island, however, the island rules wouldn't let him do so. As explained, Jacob, is the main counter force that opposes the Black Smoke Monster. When Jacob gets killed, it seems like there is no more force to withhold the monster on the island yet he still cannot leave. So my only assumption becomes that he cannot cross the border of the island. However, we are then shown that he does leave the main island and turns into Black Smoke to attack Charles Widmore's crew on the smaller island.

So how is that he can leave the island to go to another island but cannot get any further? Could he not fly over ocean?

This answer will contain many spoilers if you haven't seen the entire show.

First you must understand who/what the smoke monster is.

The Man in Black was a centuries-old inhabitant of the Island. He was once a normal man with dark hair and steely eyes, but an encounter with the Heart of the Island, brought on by his brother Jacob, changed him into a violent cloud of black smoke often referred to as the Smoke Monster. In this form he could manifest as deceased individuals, most frequently as his former body. Eventually, and permanently after the death of Jacob, he took the form of John Locke.

The rest of the answer is really a huge part of the series mythology and has to do with Jacob and The Man in Black and what their purpose was on the island.

They were raised to believe that nothing existed across the sea and that everyone that came to the island was evil and that his destiny was to protect the "Heart of the Island". 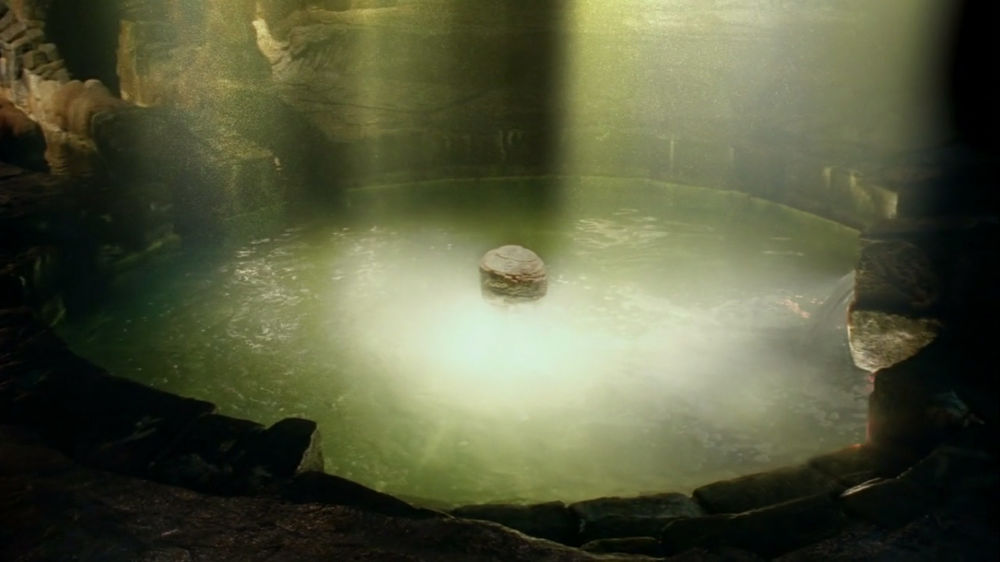 The Heart of the Island, simply put, is the energy source that causes all the different disasters. It is the reason the plane crashed, it is the reason they were pushing the button, it caused all the time skips, etc etc etc. And it is what turns The Man in Black into the Smoke Monster.

The Man in Black learns that the woman he thought was his mother, is not his mother and that she has lied to him about the world. He becomes angry and murders his mother, after which Jacob murders him and takes him to the Heart of the Island and in grief tosses his body in, thus turning him into the Smoke Monster. His life force is subsequently tied to the Island's Source and therefore he can not leave the island unless the source is released. The release of this source must not be allowed however, or it would destroy the world.

For more in depth info on this you should read Lostpedia articles: The Man in Black and The Heart of the Island

In addition to sanpaco's answer the reason why The Man in Black can go to the Hydra Island is because that island is essentially part of The Island as both islands are moving together through space and time. This means that he in fact never leaved The Island when going to Hydra and didn't break the rule.

21
Why is it impossible for women to be impregnated on the Island and survive the whole pregnancy?
12
Is the man in the flashbacks really the Man in Black?
59
Why does Gus walk away from his car?
8
What was the mechanic noise behind the Black Smoke Monster in Lost?
18
How did Hugo not lose weight while on the island?
8
Why didn't Jacob choose Richard as protector of the island?
10
Was the Island in LOST In another dimension?
5
Were any of The Others actually native/indigenous to The Island?
4
Why can't the smoke monster get over the fences?
2
Why didn’t Iron Man just fly away from Thanos, after retrieving Infinity Stones?