How many adaptations of his books has John le Carre appeared in?

In the recent BBC TV series adaptation of John le Carre's novel The Night Manager, the man himself made a cameo appearance in one of the scenes, placing his seal of approval on the adaptation. The linked article mentions that he's previously made similar appearances in other televised versions of his books. How many times has he done this?

How many film or TV adaptations of le Carre novels have been 'blessed' in this way by the author?

Apart from episode 1.4 of The Night Manager (2016) that you already mentioned, John Le Carré appeared as a Christmas party guest in Tinker Taylor Soldier Spy (2011) and as "Commander" in The Little Drummer Girl (1984), though credited as "David Cornwell". 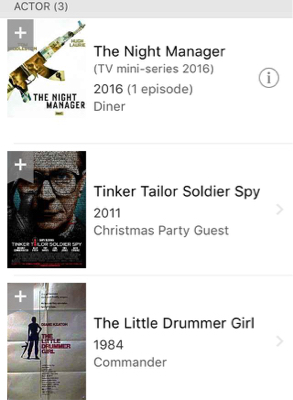 This also means that he exclusively acts in TV shows and movies adapted from his own works.

Not the answer you're looking for? Browse other questions tagged book-adaptation cameo .

28
Did Kurosawa make so many Shakespeare-adaptations to avoid censorship?
5
How close to the Sookie Stackhouse books is True Blood?
1
Has any Philip Jose Farmer books been adapted for movies or TV?
6
How many seasons of Game of Thrones will there be by the time it finishes?
10
What has changed in Season 5 of Game of Thrones compared to the books?
3
Has an attempt ever been made to film The 3 Investigators series of books?
4
How loyal has Cronenberg been to the William S. Burroughs book Naked Lunch?
10
How much is Stan Lee paid for his cameos in MCU films?