Why does The Magicians include so much un-airable dialogue?

The Magicians is a SyFy original series based on a fantasy book of the same name. It's essentially a deconstruction of the young-adult fantasy genre, aimed squarely at grown ups (it includes obvious send-ups of Narnia and Hogwarts).

The show has some pretty adult themes: there's an absurd amount of sex between all variety of participants, lots of death, depression, addiction, etc. Plus, there's a lot of swearing. Every episode contains multiple lines of dialogue where characters use obscene language, and the worst of it (primarily the "f-word") gets censored out.

It's that last part that confuses me. As far as I can tell, the show was written and produced specifically for the SyFy channel. Unlike many of SyFy's shows, it's not an Australian or Canadian import. It was produced by a US company, by people who have extensive experience with American network TV (one of the EPs worked on Supernatural for 6 years).

Why would they write and film dialogue that they knew would never be allowed to air on the network they sold the show to?

Because that's how people naturally talk, and they don't want to use bowdlerized curses (Take that Farscape/BSG!). From the Show Runner Sera Gamble's twitter. 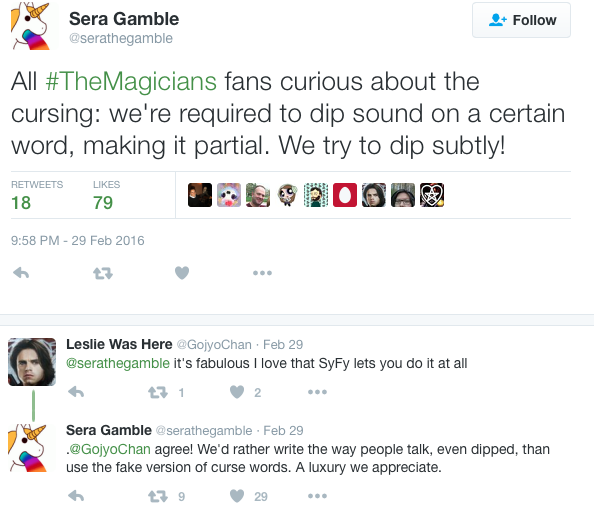 I'm sure Syfy, as a non-broadcast network, knows it can use curses with impunity, but choses not to. They probably have some internal rules about context as well (fleeting curses vs sex references which may push them into FCC obscenity rules). The broadcast indecency rules have as of 2012 also been neutered by SCOTUS FCC v Fox 2012 ruling so the FCC can't even fine broadcast stations that break the rules.

According to star Arjun Gupta in a Cinemablend article:

Before the pilot I was like cool, this is just the script and we are going to get the TV safe script soon, and that never came. And I was like, ‘What’s happening?’ and I didn’t want to talk about it because I was hoping that it would never come, and it never has. It’s been amazing. The story I heard, which I don’t know can be confirmed, is that Syfy told us to go darker and has been incredibly supportive of pushing the boundaries.

The same article explains the tactics used for the dipping:

To be clear, Syfy doesn’t quite give its characters free reign on using “fuck” in every other sentence, and there appear to be some stipulations on the context in which it can be said. Plus, there is some censoring, though not the entire word. Usually it’ll be the “u” in the expletive that will get dropped, and the “ing” if it happens to be a seven-letter word instead of a four-letter one. (And the closed captioning is also weirdly censored.)

The source material the show is adapted from also has its fair share of fleeting fucks.

Not the answer you're looking for? Browse other questions tagged censorship the-magicians .

3
Why is a TV station scrambling dirty words when it created the series themselves?