Is this scene a homage to The Jerk? 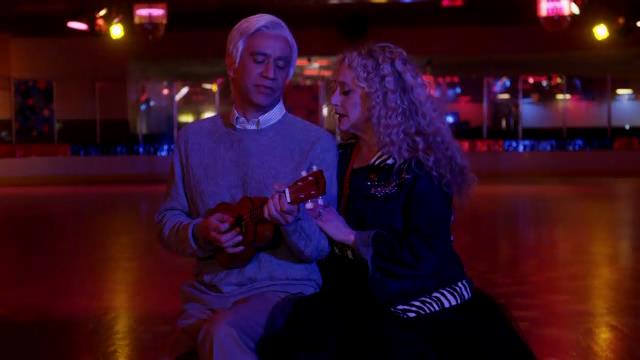 It seems to me that this bears an uncanny resemblance to the scene from The Jerk where Steve Martin plays a ukulele also and sings a song to his girlfriend:

Given the scene's setup and wig, is there any evidence that this is a homage to the same scene?

The character is inspired by Robert Durst:

It takes barely any time at all for Netflix’s Unbreakable Kimmy Schmidt to offer up one of the best gags of its second season: A recurring appearance from infamous true crime subject, Robert Durst.

Only, it’s not Durst, but SNL alum Fred Armisen’s spot-on impression of the Durst presented to the world in HBO’s 2015 series, The Jinx. The docu-series about the self-admittedly homicidal billionaire eccentric quickly captivated the country last February and March, with Durst mania reaching its height at the tail end of the spring, just as the writers of Kimmy began to discuss season two.

“In and out of that summer, obviously, everyone was just obsessed with The Jinx when we sat down to write,” co-creator Robert Carlock says between chuckles, as if he knows full well just how absurd Armisen’s cameo truly is. [...]

Durst initially pops up as a former flame of nutjob landlady Lillian (Carol Kane), but his role takes on a bigger shape in the season when the two rekindle their romance over roller skates and ukulele duets.

The biggest champion of introducing Durst as a love interest for Kane was Carlock’s co-creator, Tina Fey. “Tina really insisted that the overlap between these two New York eccentrics, as one might term them, was just too good,” says Carlock. “And I think Lillian has a very high level of tolerance for violent eccentricities.”

I suspect the use of the ukulele is merely a device to display the character's eccentricity.

It should be noted that Vulture also noticed the similarity:

Not many shows would make the call to wrap up a season premiere with a Jerk-meets-Jinx ukulele duet in a roller rink, but in Kimmy Schmidt's weird world, that's par for the course. Pretty damn hilarious, too.

Not the answer you're looking for? Browse other questions tagged unbreakable-kimmy-schmidt the-jerk .

3
Scene where Steve Martin's character dances to music on the radio
6
What does the “Cosmetologist” line mean?
5
Is this an homage to Trading Places?
6
What is this White Horse a reference to
7
Can anyone explain this reference with Jeremy Piven?