Why is the bald man digging in the desert at the start of Star Trek V: The Final Frontier?

In the opening scene of Star Trek V: The Final Frontier, there is a bald man that is digging in the desert who is then approached by Sybok.

But what I don't understand is why he is digging in the first place. It looks like he's in an open stretch of desert, and I can't imagine what would be worth digging for out there. So why is he digging?

From the actual movie script, not a secondary source:

He sinks an augering device into the ground, drilling in vain for water.

This is the Revised Final Script dated November 21, 1988, with a foreword by Producer Harve Bennett. The original script can be purchased from the genuine Roddenberry family company.

This is backed up by another, highly trusted source, Chakoteya.net:

(out of a dust storm a horseman approaches an alien drilling for water. The horseman dismounts and addresses the alien)

He is digging for the thing you need the most in a desert: water.

From the film's official novelization: 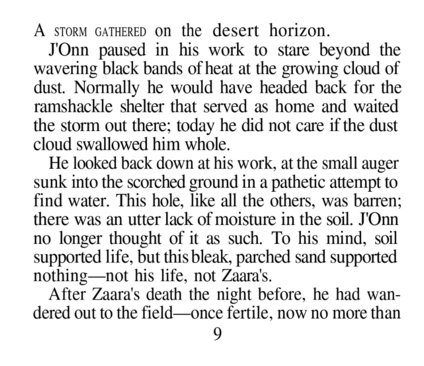 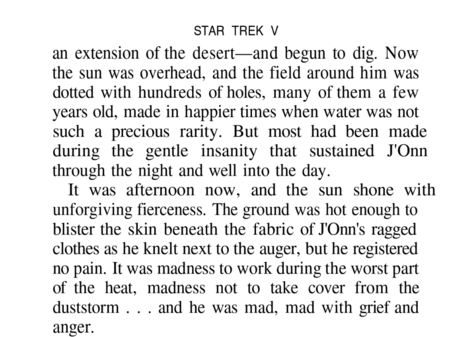 A STORM GATHERED on the desert horizon.

J'Onn paused in his work to stare beyond the wavering black bands of heat at the growing cloud of dust. Normally he would have headed back for the ramshackle shelter that served as home and waited the storm out there; today he did not care if the dust cloud swallowed him whole.

He looked back down at his work, at the small auger sunk into the scorched ground in a pathetic attempt to find water. This hole, like all the others, was barren; there was an utter lack of moisture in the soil. J'Onn no longer thought of it as such. To his mind, soil supported life, but this bleak, parched sand supported nothing—not his life, not Zaara's.

After Zaara's death the night before, he had wandered out to the field — once fertile, now no more than an extension of the desert—and begun to dig. Now the sun was overhead, and the field around him was dotted with hundreds of holes, many of them a few years old, made in happier times when water was not such a precious rarity. But most had been made during the gentle insanity that sustained J'Onn though the night and well into the day. - Star Trek V: The Final Frontier, novelization by J.M. Dillard.

Not the answer you're looking for? Browse other questions tagged plot-explanation star-trek star-trek-v-the-final-frontier .

4
In the pilot episode of Star Trek: Deep Space Nine, the "timeless aliens" were a paradox, right?
3
Why does Spider-Man (Sam Raimi version) not start out his career wanted for murder?
15
Was Kirk's retirement from the Star Trek franchise already decided in The Undiscovered Country?
7
Why was Tuvok sent to infiltrate the Maquis?
8
What was happening in "In a Mirror Darkly"?
14
Why did Vader dislike Krennic?
6
Why do the walkers in The Walking Dead even need to eat?
0
Time travel as an undo
9
Why the different TIE cockpit color in 'Solo, a Star Wars Story'?
1
Who was the man Eliza was walking towards home with, and why does she spit on him? What did he promise her?