Is Supergirl from Earth-1 or Earth-2?

I am a bit confused with the The Flash/Supergirl crossover. I always thought Supergirl was Earth-1, but The Flash rescued her and implied that she was Earth-2. If she is Earth-2 and The Flash has rescued her by accidentally crossing over to Earth-2, what is that thing on his chest? The tachyon accelerator Dr. Well was talking about in the Flash Back episode of The Flash? I thought the purpose of that device was making him faster? How did he change his frequency enough to change Earths?

Supergirl happens in one of the various unnumbered parallel universes to The Flash and the Arrow-verse. It is neither Earth-1, where Arrow, The Flash, Vixen, or Legends of Tomorrow occur, nor Earth-2, home to Jay/Zoom, the 2nd Harrison Wells, and Jessie Quick, where technology seems to have taken off decades earlier (Very Zee-Rust).

Update: A season later, they explicitly name it Earth-38.

As Barry so non-eloquently tries to explain to the Supergirl scoobies, just as Dr. Stein did to the Flash scoobies: 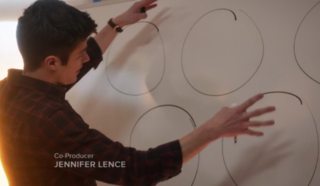 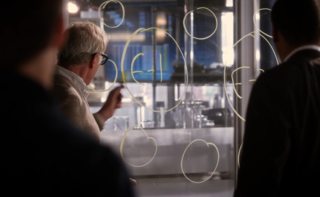 The Supergirl universe has no Flash, or Arrow or other related heroes or villains. Just like Earth-1 has no active Batman, Green Lantern, or Superman/Supergirl, though there are name drops. Unlike Earth-2, where everyone seems to have a doppelgänger, Supergirl does not have some of the key people from Earth-1:

You guys have Central City but you don't have S.T.A.R. Labs. No Cisco Ramon, no Harrison Wells, no Caitlin Snow. Nobody who's gonna be able to help me get back home.

There are also other Earths that were seen when Barry time travels or when they used the Speed Canon. The original 1990 The Flash is one of them (Where the actor who is Barry's dad in Earth-1 is the Flash.) Supergirl is the other. A future where there is a Black Green Arrow (Conner Hawke, as seen on Legends of Tomorrow).

Barry mentions a world where Nazis win WW2 (As seen on Justice League episodes "The Savage Time"), and one where Kennedy doesn't die. There is also a parallel universe where everyone is evil, but it apparently sucks. In the regular comics, this is Earth-3 where the Crime Syndicate of America exists, but this may be a reference to Earth-2, but not everyone there is evil, so it may be another Earth. These are either examples that he comes up with, or are Earths he visits or sees prior to landing on Supergirl's Earth.

In Supergirl, they specifically mention the concept of Infinite Earths, referring to the DC multiverse with an infinite number of parallel universes (prior to the current New 52 concept). Dr. Stein also mentioned "parallel Earths to infinity." in s02e02 "Flash of Two Worlds".

How the Flash gets to these parallel Earths will be shown in s02e18 "Versus Zoom", which airs April 19. They took a few weeks off. The Supergirl crossover was not aired in continuity order. Evidently, "Worlds' Finest" happens in between 5m03s and 5m05s of The Flash episode, when Barry portals out and back in while testing the Tachyon Enhancer.

But given the previews, the previous The Flash episodes and the Supergirl episode, the device on Barry's chest is clearly the Tachyon Enhancer that Reverse-Flash used and eventually gave the specs to future-Barry in s02e17 "Flash Back". As he says in Worlds' Finest, he's been trying to run faster and ran fast enough to break through to the parallel world. By accident:

Wynn: Okay. So you can just like, just hop back and forth between universes?
Barry: Uh, no actually. This happened by accident. I have traveled through time before by accident.
Wynn: That's cool.
Barry: I've never jumped parallel dimensions without meaning to. So until I can figure this out, I'm stuck here.

In "Versus Zoom", Cisco outright calls it the Tachyon Enhancer, and when Barry finally gets back to Star Labs, he says:

The most direct reference to the cross over. It also implies that Barry Time Traveled when he jumped Earths, or that time flows differently on Supergirl's Earth, as the events of "Worlds' Finest" clearly took over several days, a week tops.

In The Flash Season 3 Episode 8, Cisco and Barry are trying to recruit Supergirl and Cisco says that the tachyon device tracked Barry to Earth-38 when he visited Supergirl the first time.

Not the answer you're looking for? Browse other questions tagged the-flash arrowverse crossovers supergirl .

3
What is the device Barry (The Flash) has on his chest in the Supergirl crossover?
9
Meaning of Mark Hamill's "I am your father" line from The Flash

3
Is the Supergirl/Flash crossover understandable enough without watching the whole first season of Supergirl?
9
Why did Flash completely avoid mentioning Supergirl?
0
Does Kara (Supergirl) have a way to contact Superman?
4
Do the showrunners consider Supergirl and Constantine to be part of the Arrowverse?
4
Who is supergirl waving at season 2 episode 6
2
What's wrong with this Supergirl elevator pitch?
15
Who was this awkwardly excited girl at the wedding in Supergirl S03E08?
9
What are the different universes mentioned in Crisis on Infinite Earth?