Who did Finnick marry in the final Hunger Games movie?

Bare with me on this one; I am watching the final Hunger Games movie, Mockingjay, Part 2, and trying to understand based on my less than crisp memory of the prior films.

One of the characters from an earlier Hunger Games film was Finnick Odair, former Hunger Games winner turned male sex slave, who was forced to compete with the other survivors/winners in the 2nd Hunger Games movie, Catching Fire.

He gets married in the fourth movie, Mockingjay, Part 2.

Who is this person he's marrying? Isn't that the woman who dressed up like a tree for one of the parades and who got naked in the elevator with the other characters in Catching Fire?

His name is Finnick Odair and he marries Annie Cresta, a victor from District 4.

Annie Cresta is a victor from District 4. Annie is known for winning the 70th Hunger Games. She is the wife of the late Finnick Odair and the mother of their child.

She was practically cut out of the films and only plays a minor part in the books (as far as I can remember).

You're conflating her with Jena Malone's character, Johanna Mason. She's the one who dresses up as a tree and strips in the elevator.

That is Annie Cresta from District 4, where Finnick is also from. She was the winner of the 70th Hunger Games. Finnick, as the District 4 winner from the 65th Hunger Games, became a mentored for other District 4 tributes, specifically Annie, and that's how they fell in love.

During Catching Fire, when the special Quarter Quell placed the previous winners in the Reaping, Annie was picked as the District 4 female tribute. Luckily, Annie's other mentor (who also mentored Finnick) was Mags, the female tribute who won the 11th Hunger Games. Mags basically raised Finnick, and volunteered as tribute to save Annie for both Annie's and Finnick's sake. Much like how Katniss volunteered for Primrose and Peeta for Haymitch. 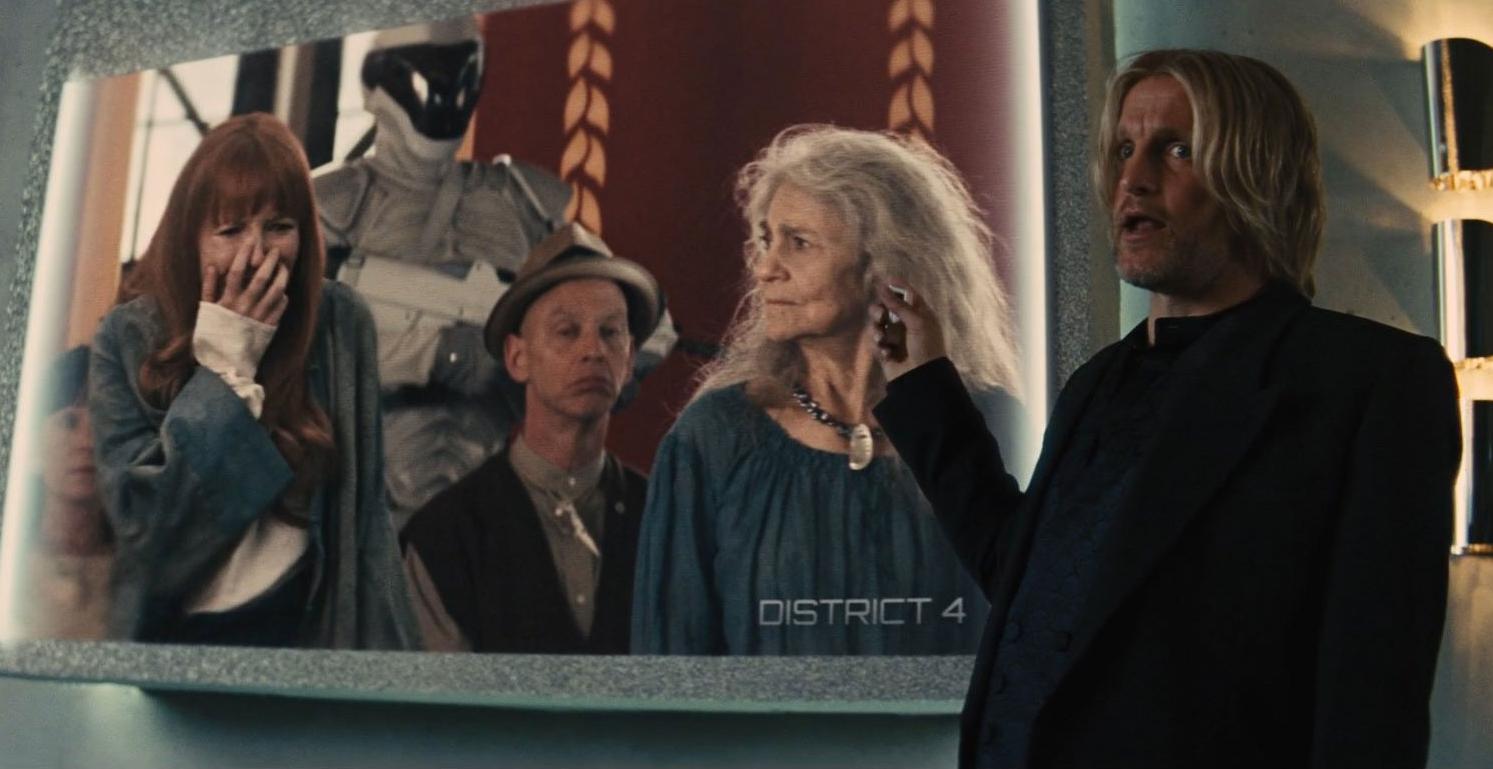 In Mockingjay Part 1, Finnick points out that Annie was arrested by the Capitol just to blackmail/extort Finnick. Even before the 2nd Rebellion started, President Snow had threatened Finnick with killing Annie if Finnick didn't do what Snow wanted. And that ended up being a sex slave to anyone that would pay Snow for Finnick. Literal child prostitution. The other tribute, who you confused Annie for, Johanna Mason from District 7, had her whole family killed by President Snow when she wouldn't be a sex slave. Since Snow couldn't just kill her after that, she was left alone until the Quarter Quell. Finnick had rather been a slave than see Annie or Mags killed. Much like how Snow was forcing Katniss to be with Peeta after the 74th Hunger Games. Finnick ended up using his position to gather secrets about Snow and the Capitol.

At the end of Mockingjay Part 1 Annie, the redhead, is (allowed to be) rescued by District 13's commandos who went in to rescue Peeta and the other captured tributes. Finnick and Annie are reunited back at District 13's medical unit. Where Peeta attempts to choke Katniss to death. Johanna is also rescued. She's the bald one in the hospital bed.

Seeing the two Catching Fire images next to each other, it is easy to understand why you'd confuse them. Annie and Johanna do share a small resemblance.

8
In which District is the Hunger Games conducted?
8
Is the Tribute selection in The Hunger Games rigged?
5
Why didn't they leave one end of the wire at the beach?
5
What envelope does Heavensbee replace?
1
Who is the boy from Katniss' hallucination?
5
Probability of being a Tribute in the Hunger Games
13
What changes to Mockingjay Part 2 were made due to P. S. Hoffman's passing?
3
Why wasn't District 12 punished during the 75th Reaping?
3
Regarding The Hunger Games' festive environment