What was the first movie entirely shot from a first person POV?

The movie Hardcore Henry claims to be the "the world’s first fully first-person action movie", that is, it is entirely shot from the protagonists first person point of view (POV).

Lady in the Lake (1947) was a film noir shot entirely in the first person POV, with the exception of 2 scenes where the protagonist broke the fourth wall to address the audience directly.

Taken from the Raymond Chandler novel of the same name, it was adapted to the screen and directed by Robert Montgomery, who also "starred" as the character Phillip Marlowe.

Wiki: "MGM promoted the film with the claim that it was the first of its kind and the most revolutionary style of film since the introduction of the talkies".

I couldn't find another, similarly filmed movie to refute that claim. As many people complained when this movie came out, that it was distracting POV, it has never been a popular film technique. It's rather more successful in "Shooter" video games. 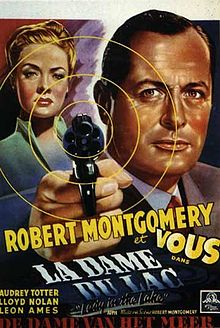 Not the answer you're looking for? Browse other questions tagged film-techniques first-appearance .