We all know how the MAV in The Martian was used by Ares crews to get off the planet but the film does not explain how they got on to it, is part of the HAB a descent vehicle? (I haven't read the book )

The MDV is basically briefly mentioned in the movie, 25 minutes in. Whatney doesn't even mention it when he digs up the Radioisotope Thermoelectric Generator, which came from the MDV.

Mark mentions the MDV when he needs the left over Hydrazine fuel, to create hydrogen, to create water.

I have created 126 square meters of soil. But every cubic meter of soil requires 40 liters of water to be farmable. So I gotta make a lot more water. Good thing is, I know the recipe.
You take hydrogen, you add oxygen, you burn.
Now, I have hundreds of liters of unused hydrazine at the MDV.
If I run the hydrazine over an iridium catalyst, it'll separate into N2 and H2.

In the original novel, it describes the MDV:

The MDV is basically a big can with some light thrusters and parachutes attached. Its sole purpose is to get six humans from Mars orbit to the surface without killing any of them.

It's basically the same exact thing as what we currently use on Earth, just bigger, and with some fire power underneath.

And in the book, the MDV is destroyed by the same storm that almost destroyed the MAV, the communications dish, and Whatney.

The MDV is on its side and there’s a breach in the hull. Looks like the storm ripped the cowling off the reserve chute (which we didn’t have to use on landing). Once the chute was exposed, it dragged the MDV all over the place, smashing it against every rock in the area.

The MDV, for both the Ares 3 and Ares 4 plans, get more mentions, that were ultimately dropped from the movie because it doesn't actually change anything from the "Rescue Mark Walberg again" plan.

But It is in no way connected, or part of, the HAB. 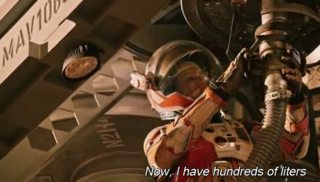 1
Why couldnt the crew land on mars to pick Mark Watney up?
6
Why were the MAVs sent so far in advance of missions?
6
How did launched vehicles match speed of slingshot vehicle?
9
What protocols did NASA stop using during Apollo 9 that the CNSA is still using?
4
Earth Mars chat communication delay
7
What happened to Rover 1 in The Martian?
13
Why didn't Mark Watney grow more crops after malfunction happened in the Hab on Mars?
34
Why didn't Mark Watney start digging downward?
6
How did NASA astronauts launch the pod from Mars, though they were at millions of Kilometres away?
2
Colonizing Mars with Crops