Do we know who died in the season 6 finale of The Walking Dead? [closed]

At the end of S06E16 of The Walking Dead, a major character died. However, who this character is was not revealed on the show.

Series creator Robert Kirkman, appearing on after show The Talking Dead, confirmed outright that the dearly departed character is a fan favorite (which should narrow things down a bit). "As upset as people probably are at Negan's introduction and how he's coming in and killing somebody who is very beloved to everyone," he said, "from his perspective, he's the hero of his story, like most villains. And if we'd been following him this whole time, we'd be 100 percent on board with that."

Showrunner Scott M. Gimple, meanwhile, had this to say about the cliffhanger: "When we reveal who's on the receiving end, that's going to be the start of another story. The kickback effects from that, what it makes everyone into, how they react, how the world changes for everyone — that's the next part of the story."

So this question is attracting POB close votes, and speculative answers. Let me stress the original question that remains unchanged from revision one:

Is there any evidence, out-of-universe, that would either narrow down the list or identify who died?

I am not asking for speculation, or a discussion of theories, is there any out of universe evidence?

These appear to the candidates, based on "characters kneeling before Negan" and "very beloved to everyone."

I thought I heard someone on Talking Dead slip-up and speak of a character in the past tense, but I am not sure if that actually happened or if I was tired and hearing things.

TL;DR: Is there any clear out-of-universe evidence that would allow us to definitively narrow down the list or identify the victim? No, not really.

There is no out-of-universe information that would tell us who died, or even allow us to narrow down the list beyond the obvious "Probably not Carl or Rick" (Negan seemed to set Carl aside to some extent, and at least pretended to be reluctant to kill "the future serial killer"; it also seems very unlikely that the main protagonist would be killed off at this point).

What do we know so far? Mostly that there aren't many people involved with the show who know who died.

No one but the producers, and perhaps the writer(s) of the season seven premiere, knows anything. Even the cast - including the person whose character was killed off - is in the dark.

Q: We don’t know who got it, but did the cast know who was dying when you filmed it?

A: No. It was specifically written that way. The POV shot looking up at Negan in that last moment, I don’t think anyone on that knew what happened. As a matter of fact, if I’m not mistaken, I think we had wrapped all of the actors, because the shot we did with Negan, the sun was coming up and Jeffrey was about to get on a plane and fly back to New York and we didn’t have anybody there because we didn’t want even somebody on the crew or somebody there to go, “Oh I get it, I know what’s going to happen.” So I think they were all gone. We built a little rig for Jeffrey to hit so that there would be impact with the baseball bat.

We have not filmed [the scene where the character is identified] yet and I don't know if the person knows yet or not.

You'll be out of your misery very soon in the new season - and I guess so will somebody else! I want to know what happens next too - believe me! Honestly, I do not know who it is.

I believe there is no way [for fans to determine who died]. There are a couple of things in there that might help people possibly limit the amount of people who are vulnerable. But I will recommend people not to go down that route. I truly don’t think there’s a way to puzzle it all out definitively.

This is the hardest episode that we've ever had on the show and none of us know what happens next year when we go back.
- Recorded interview which appeared on the season six finale of Talking Dead

We made a pact because it was such an intense two days [filming Negan's scene] when we shot it to keep our heads down and let it play out as it was intended. I have theories and thoughts but I'm not going to go on record and tell them quite yet! Maybe sometime midseason next year! All I know is we haven't fully shot the scene yet and I'll only know when the scene is completed how Rick feels. One of us is going to get it and that's going to be terrible personally and professionally. We made a deal when we got down on our knees that we wouldn't talk about it.

I’ve been a fan of the show since the beginning and for me, I’m speculating about where it’s going to go and where it’s headed.

I got the script two days before I shot it. I only got Negan's stuff. I didn't even get the full script... I didn't know it was going to be a cliffhanger until I watched the show. That was done in my world. I don't know if any of the cast knew how exactly it was going to end, which is what caused a lot of the uncertainty and emotion going on.

The actors don't know, and the people who do know (the producers, and maybe the writer(s)) aren't talking. Furthermore, they have gone out of their way to prevent fans from finding "clues" and working it out themselves.

Can we speculate? Of course.

Who died in the comic book version of this scene?

Glenn. Interestingly, Steven Yeun (the actor who plays Glenn Rhee) has been entirely silent on this issue since the episode aired - much like the way he dropped off the radar earlier in the season when the show left us with a cliffhanger as to whether or not Glenn had died. Yeun is the one member of the cast who has been reading the comic books since they came out, long before anyone thought about making a television series out of them, and he is therefore well aware of how closely fans of the comics will be watching him until October.

Warning: The images in the spoiler block below may be disturbing to some users 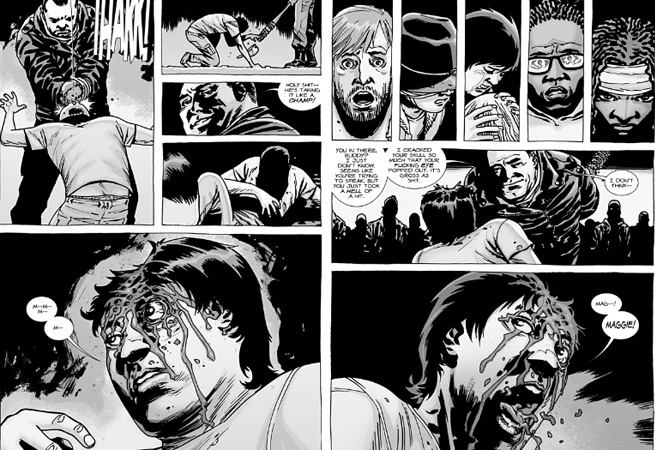 But this doesn't necessarily mean anything...

In the comics, Shane lasted about 5 issues, and never made it further than the very first campsite near the quarry on the outskirts of Atlanta (i.e., if the show matched the comics, Shane would have died halfway through season one). On the show, he hung around until the end of season two. In a similar vein, Andrea died in season three of the show, but she's still alive and well in the comics (note: at present, the comics are about 2 years ahead of the show).

Who else dies around this point in the comics?

Abraham. Basically, Abraham died in the comics the same way Denise did on the show - a crossbow bolt through the eye out of nowhere, shortly before Glenn is killed by Negan. This means the TV version of Abraham has run out of preexisting story line from the comics.

However, that doesn't necessarily mean anything - Daryl doesn't exist in the comics, and Carol was a minor character who died very early on in the comics. As with the point above, we need to be wary of assuming that the version of events in the comics has any bearing on the show.

Has anyone dropped any potential hints?

Note the past tense Michael Cudlitz (Abraham) uses in his tweet to Josh McDermitt: 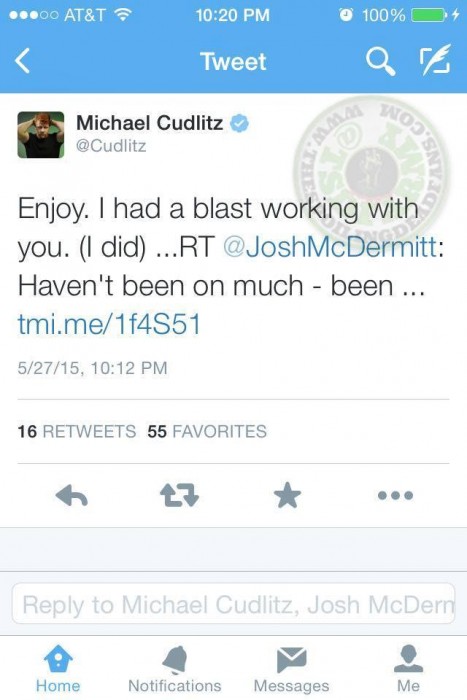 Enjoy. I had a blast working with you...

Fans predictably went crazy when they saw this, and Cudlitz quickly edited the tweet to remove the offending words.

Narrow down the list; yes. Based on Negan's comment (something along the lines of, "If he (Rick) makes any more noise, feed him his son's good eye"), it's clear that the deceased is neither Rick nor Carl. Rick wouldn't be making any unnecessary noise if he was being clubbed to death, and no one would be pulling out Carl's eye while Carl was getting clubbed to death. That is a definite. Anyone else is strictly conjecture at this point.

The correct answer to this question is obviously: We don't know. Even the actors do not know, from what I've heard.

But I read the comics and here's what I can come up with:

Denise took Abraham's death in the comics (arrow to the head). Abraham had his farewell moment with Eugene. He also had his emotionnal moments with Sasha. Plus he's a major badass and a fan favorite. He also was the only one looking Negan straight in the eye (major badass, I told you). To my mind, he's the most legit character to have died. However, we all know Glenn gets the bat in the comics. But I'm fairly certain the producers decided not to follow the expectations of the comic readers. Concerning Daryl... Nah. His relation with Dwight is way too interesting for the show. I don't see them killing Daryl after building him a rival. That'd be stupid. But who knows how stupid this show can be...

Take a look at this, scroll all the way down. At season 7 it states

Glenn will appear in this Season.