Why was that guy sprayed and what was he sprayed with?

In the Season 6 finale of The Walking Dead, there is a scene during a discussion between Rick and The Saviors where a man is sprayed with something. What is he sprayed with and why?

What was he sprayed with? 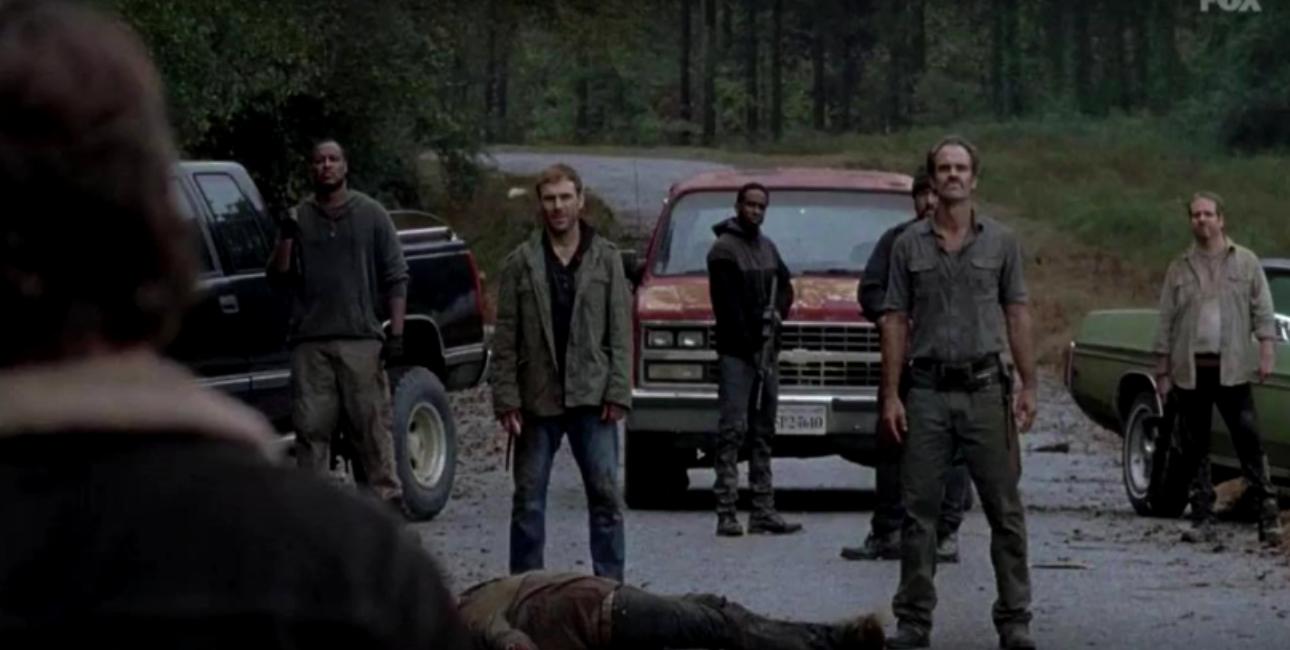 The victim just before the spray painting 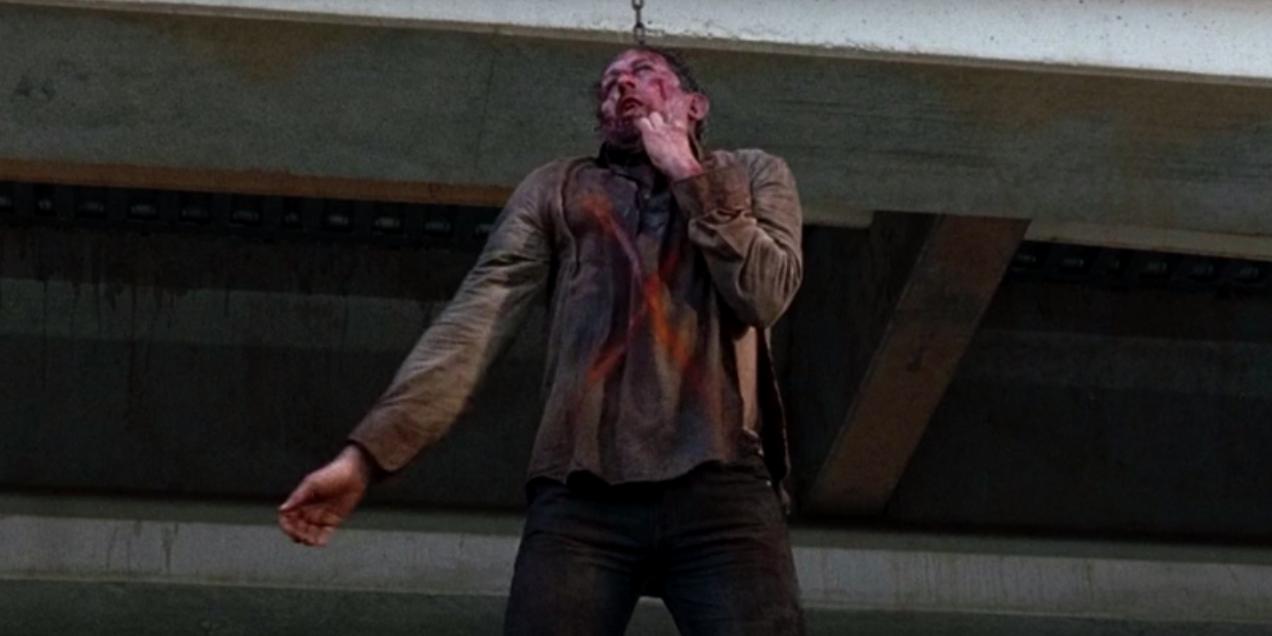 The victim the next time we see him, with an orange X spray painted on his chest

Why was he spray painted?

We don't know for sure, but chances are good that @Glunias is correct. Rick's group never got a good look at the guy's face, but they saw what he was wearing and they saw him being sprayed; taken together, this let them know that the man they saw hanging from the bridge was the same man they'd seen laying in the street and being beaten earlier.

What's the point of this whole sequence with the Saviors and the spray painted guy?

The Saviors are sending a message to Rick: "Mess with us, and reap the whirlwind." The fact that this unfortunate man showed up at two separate roadblocks ahead of Rick's group, and the fact that the balding mustachioed Savior who was beating him showed up at three roadblocks and the clearing in the woods where Negan eventually appeared, was apparently intended to demonstrate that the Saviors were a step ahead of Rick throughout the day.

The Saviors sprayed him with paint. I think they marked him so that rick and his group would know next time they see him (hanging from the bridge) that it is the same guy. From where Rick and the others were standing I doubt that they could see his face to recognize him .

if you watch always accountable you will see sasha wrote dixon on the door so he could find them,the saviors where out looking for dywhite(name spelled wrong) & those girls that ran away from the compound,dixon caused one of the saviors to lose him arm and then blew up more saviors on the roadblock with someone watching in the background,we know dywhite was caught & his face burned so he had to tell on daryl & the saviors found dixon on the door so i say the X on the hanged man means di X on is the man negan is going to kill, also wade negan's lead savior had a walkie-talkie and heard dixon calling rick's name on it so that is how negan knows rick name

I'm super interested in finding out what they were spraying him with, too.

My best guess is they realize they have beaten that man so badly and cut him in so many places that it's only a matter of time before infection sets in. Fortunately for him, they need him to set an example to Rick and the rest of the group so they're spraying him with a anti-bacterial spray, and I can think of a couple reasons why.

The first is the obvious reason, and that's to fight the infection. But why? The answer to that is to prolong his suffering, which is in a way symbolizing what our group is doing by turning around delaying what we later find out is the inevitable.

The second reason is they decide that first confrontation wasn't worth wasting him in the road. These guys are all about instilling fear in people, and Rick's cocky attitude wasn't providing the proper scene they wanted. So they spray him with the anti-bacterial spray to preserve him for a little longer, until they can properly waste him to send chills down Rick's group's spine. Which I think they did pretty well by first, showing their power by dropping huge trees in the road, (which shows they have both heavy machinery and lots of man power) and then by hanging that poor man from the bridge and setting the whole thing on fire.

5
What happened to the family photos?
6
Where did Rick get the matches?
4
Is there enough evidence in the mid-season finale to conclude "Little-Ass-Kicker's" fate?
5
What was with that scene with Glenn and Daryl?
5
Who did Rick Grimes shoot at the end of the Season 5 finale?
23
Opening Scene of The Walking Dead?
3
Where is Wade from s6e6 of walking dead in season 8?
6
Why did Rick decide to keep Negan alive?
12
In season 3 of The Walking Dead, was Morgan referring to The Whisperers from Season 9?
2
Why did Shane see those visions when he died?