Why is Jack frost dressed in a hoodie?

In the animated movie Rise of the guardians, the character Jack frost wears a hoodie. All the others characters are depicted wearing colourful and relevant clothes. I wonder why Jack frost is shown wearing a hoodie. Is there a reason behind this?

The writer of the source novel (and the film's Exec Producer), William Joyce offered the following pen&ink sketch on his instagram feed, implying that Jack has long been quite the dandy and an aficionado of hooded outfits (in this case made by the good elves of "Ye Oldie Outfitters of Urban Yore"), well before the 21st Century 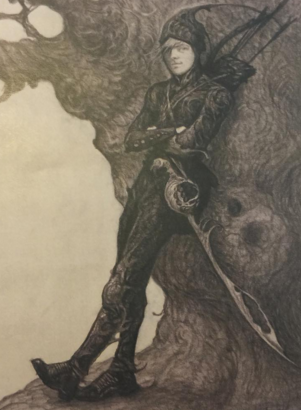 Not the answer you're looking for? Browse other questions tagged character rise-of-the-guardians .

16
Why does Rorschach speak with such a growly voice?
1
Is there some additional Information about the killer couple in The Raid 2?
9
Why was Chiwetel Ejiofor made to be part Indian in The Martian?
9
Why did the Chipmunks' sweaters become shorter?
5
Why do comic relief characters tend to be male?
8
Why does John Reese mostly wear a suit
11
What is the extent of Wonder Woman's powers?
7
Why did Spielberg use fictional characters (informants Louis and Papa) in Munich
6
What was the reason behind Ronan's name?