I was wondering why doesn't Lucifer just show his true identity to them? I was first thinking he can could only show his devilish-self when he wants to punish the people. But in the first episodes he just shows his devil-eyes at school to the young girl who bullied Trixie (Deckers daughter). He could just flash his eyes to Decker or Linda to prove his point, as optimistic as he is I don't think he would fear their reaction or is there something he is affraid of? 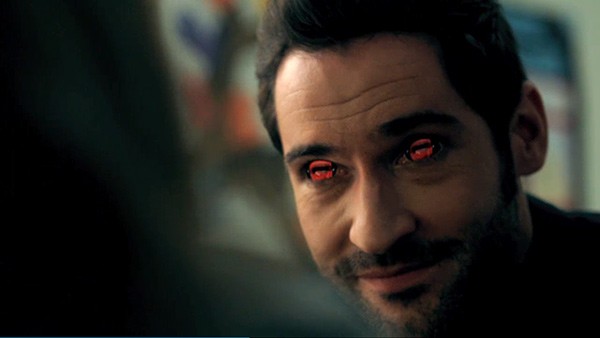 I believe it's because he simply doesn't want to.

In the series, he flashes his eyes to people who have committed some sort of sin, such as the man on the street or the little girl in the school who had bullied Chloe's daughter.

He appears to do this out of a mixture of anger and amusement. Whilst we don't know the final effects on the bully or the man on the street, we know from the Pilot that exposing himself to Jimmy Barnes led him to near insanity. Now, he obviously showed his whole face, not just his eyes, so this exposal was much more frightening, but it's still worth noting the effects.

With Linda, he doesn't really need to show who he truly is. He is having sex with her in return for some psychological help and has no need of her beyond that. He could expose himself, but why bother? He could lose his psychologist and it doesn't in anyway benefit him.

With Decker, he's currently quite confused about her character. Remember, she appears immune to his charismatic "charm" and doesn't reveal her desires to him the way others do. He's fascinated by this. Again, he could show his true self to her, but he risks scarring her, losing her (which he definitely doesn't want), and not understanding exactly why she's so immune to his abilities.

It isn't strictly true that Lucifer offers no proof of his nature to Decker.

He does try to explain his nature by challenging her to shoot him in an effort to prove his invulnerability. That doesn't work out well as this is how he discovers that her presence makes him vulnerable (apparently progressively since earlier in the series he survives being shot by the record producer in Decker's presence).

He seems to reserve the demon eyes and demon face for people who need to be punished, possibly because showing anyone these features is terrifying and often drives them mad. He doesn't want to do this to someone who doesn't deserve it.

In S2E6 Lucifer reveals his true face to his therapist, Linda to explain the situation that led him to kill Uriel. She takes some considerable time to come to terms with the revelation and it nearly breaks her. It takes her several episodes to recover from the experience.

Both these examples show that it isn't Lucifer's motivation that is the problem in telling Chloe the truth. He has always told her the truth, but she continues to disbelieve. Lucifer tries to offer proof but always fails and the reasons remain mysterious. In principle, the proof is unavoidably provided to Chloe at the end of series 3 (though not deliberately but because Lucifer needed to use his angelic powers to save her), but we won't know whether she really sees this or really believes it until series 4 has been broadcast.

It could be that he's tired of proving to them that he's the devil. He tried till the 4th episode to prove to Decker when she actually saw the reflection of his eyes. But instead he discovered his vulnerability. Decker doesn't want to believe and besides she's very interesting as she seems to be immune to Lucifer's charms which leaves us with the question of "who the hell is Decker. As for the doctor she's like Cleo. She doesn't want to believe and thinks he's talking in metaphors. Lucy knows he can't prove to them. In the last episode his brother tries to tell the doctor during his confession that Lucy is actually the devil but Lucifer shot him, telling him something like she'll never believe.

Um well I think to me it's kind of obvious because in one way or another Decker is different to all the other girls and he seems to truly have fallen for him. Recently he gave up his life and made a deal with God to keep her safe. He won't want to scar her or make her go insane. Plus if he shows her that side as he said himself "People usually are afraid of this side of me" and he doesn't want to make Decker afraid; he only wants her to believe and love him. So I don't think that he'll do it like that but he still persists and he even almost got her to test his blood until his brother ruined it all for him by making Lucifer out to be insane. But even though she doesn't know what to believe. As for the therapist well Lucifer doesn't seem to care as long as he is still getting his "advice". Also she plays along a whole lot so it doesn't really phase him unless she picks a fight about his identity or something related. This is just my opinion and this is just a theory so we will just have to wait and see :) I cant wait to know more about Decker and for her to finally believe so thanks for reading this and taking this into consideration :) -BW

He can't because he "loves" Decker, but doesn't know that it's love. That's why when he's with Decker, he can bleed ... get hurt ... or die. When she's around, his mind powers don't work on her.

Episode 10 explains why Chloe has an effect on Lucifer. Chloe is blessed. After listening to Chloe testimony. I think she does believe he is the devil. But it is like someone that knows the other person in the relationship is cheating. All the signs are there. But as long as they don't actually see it, they stay in denial.

I think it comes down to an "Angel rule" that you don't show your true nature. Lucifer's a rebel who doesn't follow the rules, obviously, but that's still a rule he was raised with, and, in addition, if he's going to pass as human, which he seems to want to do, it makes sense for him to follow that rule.

It has nothing to do with becoming more human or losing his power. Showing his true face to someone is hardly something that takes a lot of his power, not like healing someone who's been shot or being impervious to bullets.

He breaks the angel-rule when he sees a sinner and he wants to punish or scare them, but other than that, he follows that angel rule. Don't show yourself to the humans. Obviously, saying who he is, he has no qualms with and that's a rule too.

If I can find the script from the episode where Amenadiel and Lucifer have that "We don't show ourselves" talk, I'll post it.

9
At what point did Lou Bloom decide to 'sack' his assistant?
5
Why didn't Lucifer save the priest?
4
Why did Dr. Linda stop doing Lucifer?
4
Why was Chloe Decker not shocked/surprised when seeing Lucifer in S01 finale?
14
Whose body does Lucifer have on Earth, in the FOX TV show?
28
Why does the devil go by the name John Milton?
3
Why there are such big time gaps between airing the episodes of “Lucifer”?
3
Why Did 'Lucifer' Season 3 End the Way It Did?
1
Why is Lucifer the only angel with non-human face?