Did they use the real Farnsworth House for filming?

When watching Batman v Superman: Dawn of Justice I first noticed that Bruce Wayne's house, to which he moved after Wayne Manor apparently burned down, was modelled closely after Farnsworth House. But then when seeing more interior shots, especially when he discussed with Alfred later, I realized that it actually is Farnsworth House in its entirety or at least accurately modelled after it.

So, did they really film those scenes at Farnsworth House or just design Bruce Wayne's home based on it? If they really used the actual house on-location, then how did they realize the huge body of water in front of the house? Bruce Wayne's house seems to be located directly at the water (where his secret entrance to the Batcave is), while Farnsworth House, yet lying on Fox River, is a little farther from the water. Did they actually flood the whole area for real or employ CGI to create it (or a mixture of both)? Or maybe they filmed the interior scenes at Farnsworth House and employed a model/CGI for the exterior shots?

It is very similar and I thought the same thing when I watched it. But I found this article, which explains that, while closely modelled after it, it's not the real Farnsworth house, but a newly constructred house in Orion Township, Michigan about 40 miles north of Detroit. Which also answers the question about the lake location, as it was constructed directly at the water as depicted in the film.

When comparing it to Farnsworth House it seems like a darker rendition of it (befitting Bruce Wayne's darker personality) and is actually 1 segment longer (left: Wayne's house, right: Farnsworth House): 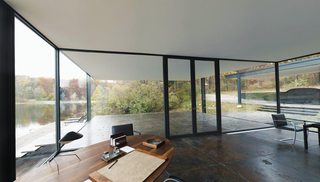 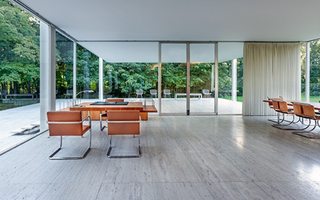 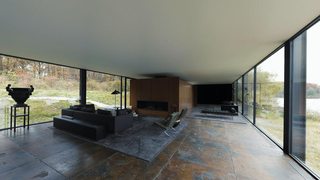 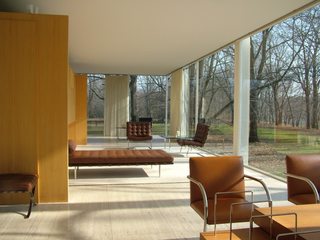 In fact the article notices even more similarities to modernist architectur, from the use of modernist furniture to especially Philip Johnson's Glass House (itself inspired by Farnsworth House), from which it seems to have taken the use of darker steel for the supporting structure. (And interestingly Johnson's Glass House actually features an adjacent underground bunker.)

Wayne's residence can even be viewed in a 360° interactive tour.

I've just found this on YouTube, a time lapse video of making the set of the "Glasshouse". So it was apparently built entirely from scratch for the film. It's obviously a Mies tribute - it appears to be one segment longer than the Farnsworth House:

This darker house isn't the one in the movie! I studied Farnsworth house and know it by heart. And the Fox river floods the area sometimes. I think they did on computer, but inspired by the real situation of the flooding.

14
What kind of blood do they use in movies for bloody scenes?
5
Was there a real Skyfall house in Scotland?
1
How would a producer decide whether to use a real or "mock" site for filming?
16
Does Narcos use real corpses?
26
Why did Zod not use some other planet for terraforming?
1
Did they build a helipad just for the movie?
2
Filming locations for Star Trek IV: The Voyage Home
1
Protection for actors when filming sex scenes in mainstream movies