Horse jumping off the cliff scene from 'The Revenant'

In the movie The Revenant, when Di Caprio jumps off the cliff while on his horse, the scene looks very realistic. While in the "fight with the bear" scene I could definitely tell that it was done with help of CGI, the horse jump looked a lot more realistic.

How did they film it?

The horse-off-the-cliff scene was created with the help of Industrial Light & Magic per this interview with the film's visual effects supervisor.

This clip (which I believe was aired during Academy Awards) shows a brief glimpse of how the scene was put together. Essentially, a stunt man rode a motorized mock-up horse over an embankment and jumped off, landing on an inflatable, and then CGI was used to add realism. 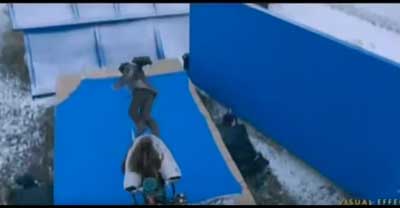 There was a brief behind-the-scenes snippet from that scene during the Academy Awards, when they were announcing the nominees for Best Visual Effects. It appears that a fake horse and a blue screen were used. There's a copy of the ceremony on YouTube, but the video quality is very poor. The snippet begins at 43m18s.

Not the answer you're looking for? Browse other questions tagged film-techniques effects the-revenant .