Who was the man in the Wayne building?

At the start of Dawn of Justice, we see a flashback where Bruce Wayne was present in Metropolis while the highly destructive battle between Superman and Zod was happening at the climax of Man of Steel. All over downtown, bulidings were getting trashed, and a Wayne Enterprises building was right in the middle of the action.

We see Bruce Wayne on the phone with... someone... an older man in some sort of supervisory role, and he's urging the guy to evacuate the building. But it's not particularly clear who the guy is, especially because it really sounds like Bruce is calling him "dad", but we know that his father is long dead at this point. So who was he supposed to be?

According to the casting sources, the man in the building is "Jack O'Dwyer", played by actor Hugh Maguire. 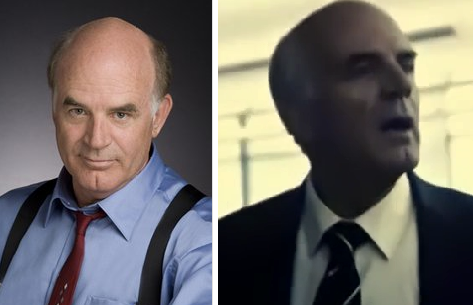 The man that Bruce was on the phone with was an executive in Wayne Enterprises. Presumably, he was the highest ranking executive in that particular building. When it sounds like Bruce is calling him "dad", I assume he's just calling him by name. IMDB's cast list just lists all of those people as "Metropolis Citizens", but I would assume his name just sounds like "dad" (e.g. "Dan").

Jack O'Dwyer, played by actor Hugh McGuire. I theorize he is the Wayne Industries Metropolis Division HQ's equivalent of Mr. Fox ... my 2 cents.

17
Is this Green Lantern and Batman reference intended for a Justice League movie?
14
Why does Ben Affleck / Bruce Wayne look old?
14
How does Superman know Batman is Bruce Wayne
10
Do Batman Begins and Batman vs Superman have different origin timelines for Bruce Wayne?
16
What makes the difference between Zod's and Superman's regenerative abilities?
11
Did they use the real Farnsworth House for filming?
7
Why is Mr. Keefe blaming Bruce?
6
Does Wallace Keefe know Lex Luthor's plan in Batman v. Superman?
8
Wayne Manor in Batman v Superman
4
Was Flash's message in Batman vs Superman for the event occured in Justice League?