What movie is this set from? [closed]

While on a motorbiking trip across America in 2012, we had the good fortune to be taken to visit a movie set. We were not allowed onto the set itself as they were due to start filming soon after we left, but I took this photo from the end of the set: 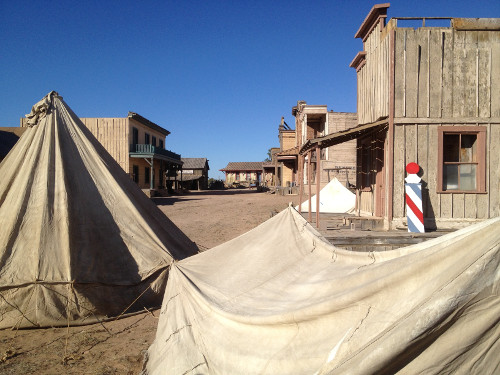 At the time someone did tell me what the name of the movie was, but I cannot remember at all. I've checked through the list of Westerns released in 2013/14 but didn't see anything recognisable.

Is there a way to search movies based on when and/or where they were filmed? Does anyone recognise the set?

Thanks to the research by the commenters above, I am sure the location must be the "Bonanza Creek Ranch". Looking at the location on Google Maps it fits with where we were shortly before and afterwards. Doing a new search, there are 3 films within the time frame:

I saw this in the trailer for Sweetwater, which looks like the set from the opposite end of my photo:

The balcony on the far building looks different, but this is the only one of the three that has famous actors in it, and it seems the best fit for dates. I'll check it out if I can.

Not the answer you're looking for? Browse other questions tagged identify-this-movie production film-location western .