How are surgery scenes shot in TV/Film?

How are the medically invasive surgery scenes shot in movies or even for television ? House MD has some of the most detailed surgery scenes on television - for example the scene where House himself tries to remove the tumors from his leg after self-medicating with experimental drugs that were being tested on rats.

Is most of it CGI or are actors made to wear skin suits for those scenes ?

Practical Effects are used some of the time.

It's cheaper and easier to hide the body and use a fake double, than it is to use CGI or anything else.

Notice the false bottom of the chair, and RDJ's body hidden away.

You can see in this pic They first created a prosthetic chest over his real chest and spray tanned it to match his original skin tone. Then they put in his "heart" so it would look like it's actually a hole in his chest while his actual chest is underneath it. 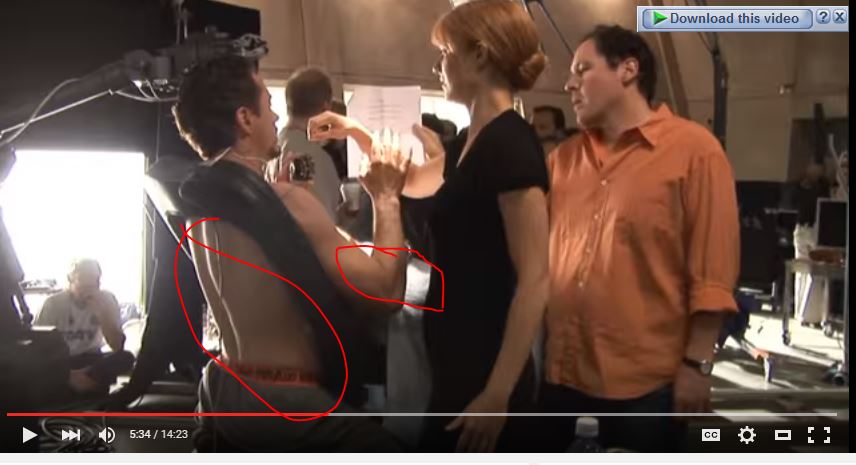 Shamelessly grabbed from How did they create the hole in Robert Downey Jr.'s chest for the Iron Man movie?

Of course, that's not always the case. CGI: 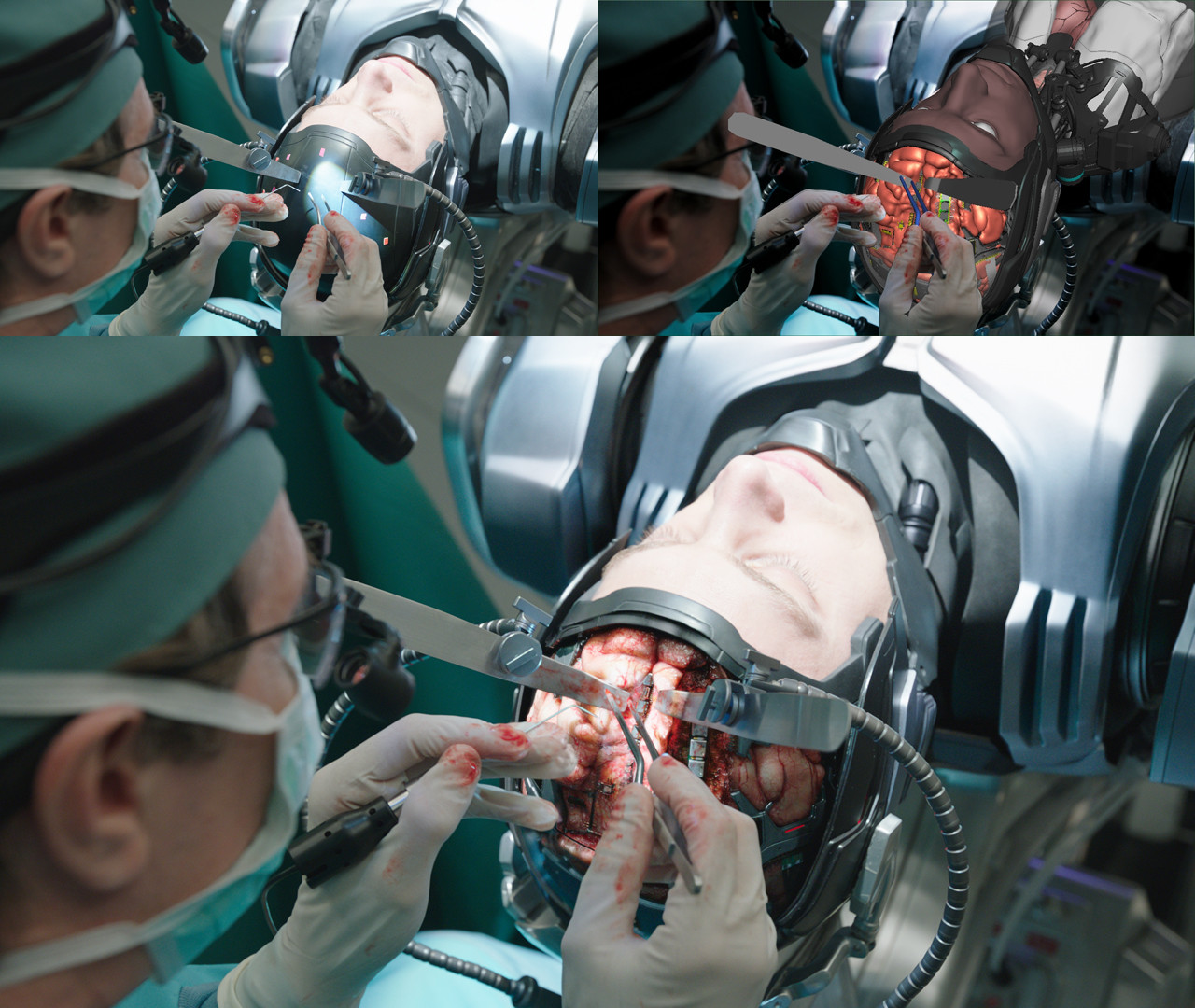 In the ensuing surgery shots we see Murphy’s exposed brain. “It was a really fun shot” says Compositing Supervisor Adrian. “There was a certain playful element of adding bits of goo that came off the tweezers, it’s all CG and it just looks gross.
-Framestore, the Digital Effects company that worked on Robocop

And Prometheus used both.

Notice how she's sitting, same as RDJ above. Her head is weirdly angled. 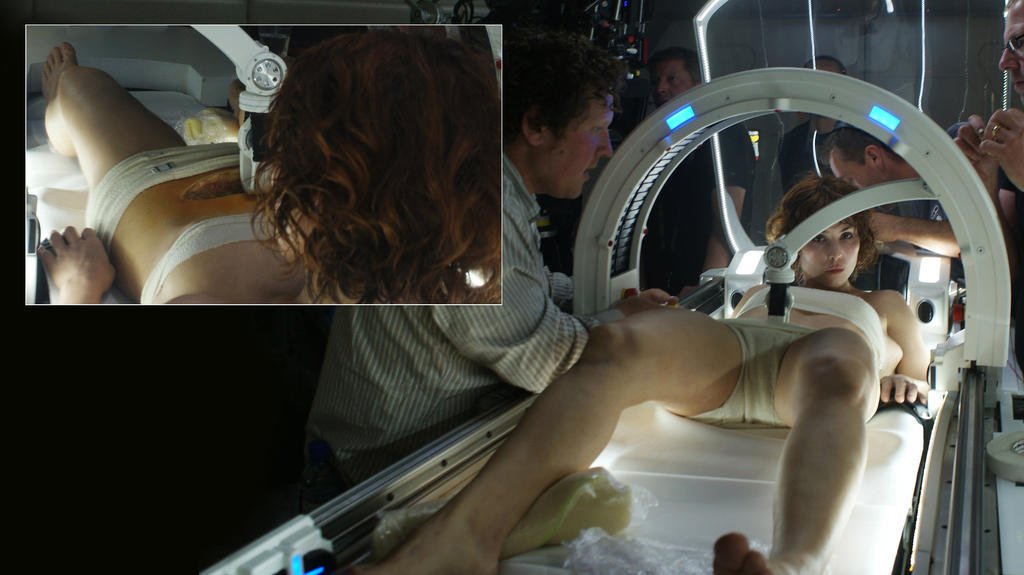 I assembled & sculpted this body from lifecasts of Noomi Rapace and from this we made a silicone body which ends below the actress' own arms. It was used for a sequence in PROMETHEUS in which surgery needs to be carried out on Elizabeth Shaw. The stomach was manipulated from underneath and the wound could open and close mechanically, with VFX adding robotic surgical arms in post and blending the top edge of the body to Noomi Rapace's own chest.
-WALDO MASON EFFECTS, on Prometheus. Check out his gallery for more effects in other movies. Warning, Gore.

It highly depends on the end result wanted.

A chest or leg scene is easier in practical effects, while the brain scene with the actor's face right there is easier in CGI. Most of the time, they would use a partition, and just merge two shots, one of a fake, and one of the real together, as a composite. But CGI can always be added for some particularly specific details.

From the scene in question, the self leg surgery, notice how all the surgery parts are close tight shots, quick, with a shaky camera, and at an angle. They use film techniques to hide the real effects.

A more compelling surgery is done in "Wilson's Heart", where House gets brain surgery to recover memories. The scenes of his face are shot face on, while the scenes with his brain are done from above, hiding his face. They use a fake brain prop. The "partition" being the brace around his head. 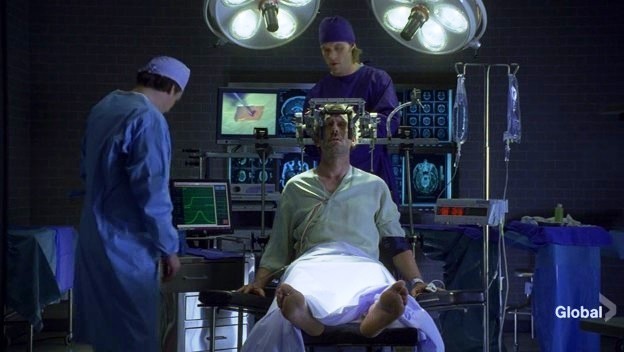 I actually had to go to L.A. to the headquarters of our special effects guys, and they did a full head cast of my head which took hours, with this crazy plaster all over me. Then they built the head so when we got ready to shoot the thing, they shot mostly my head, but then when the actual injection came they used the plaster head.

But wait. When the needle goes in the eye, your other eye is blinking, so...

Yeah I mean it was all done so precisely. They had to shoot it over and over again to get it in the exact position so they could basically paint in the fake eye in post without it looking off.

That's how they explained it to me. But I still was lying there on the table with Clive's shaky hands holding that needle over my actual eye for a while.

1
How are harmless but potentially painful or undesirable scenes shot in medical TV shows?
34
How did they create the hole in Robert Downey Jr.'s chest for the Iron Man movie?

40
How do they film scenes with the actors driving in a car?
17
How do they film “flying human” scenes?
16
How were Hiro's time halting scenes filmed?
1
How do they shoot long underwater scenes (especially the even longer stylistic ones)?
2
How were the CGI scenes created for National Geographic series WW II Greatest Raids
9
How are water scenes (with flooding) achieved without injuring actors?
3
How are scenes shot in burning buildings?
1
What conditions and requirements are needed to film sex scenes safely?
0
How do they cost effectively film the scenes where James Franco plays 2 roles?