In what order should I watch The planet of the Apes franchise?

Basically, I ended somewhere on the reboot film made in 2001. I would like to get back to Planet of Apes series and watch it again.

With Star Wars franchise, there is famous order of how should one watch the series. Is there something similar with The Planet of Apes series?

Star Wars is a single franchise, but Planet of the Apes doesn't work like that. First, there is :

They should be followed in release order.

Then comes the Television series

Both TV series are based on the same work as the original movie series but they are stand-alone series (even unrelated to each other) and can be watched separately in any order.

2001's reboot was expected to kick-start a new franchise but it never succeeds.

All works are based on the same novel but their direction is a bit different and they do play with the story and go a different way.

So you can either pick all or pick any one franchise. 2001's Burton's version is not part of recent reboot and if you are only interested in the new iteration, then start with Rise of the Planet of the Apes and skip previous works. Else you can watch the original film series. Both TV series are individual and can be watched separately if you want.

I will recommend picking only from the original movie series or the latest reboot or both.

As far as I'm aware, there are two suggested watching orders:

This involves watching the films in the order they were (or will be) released: 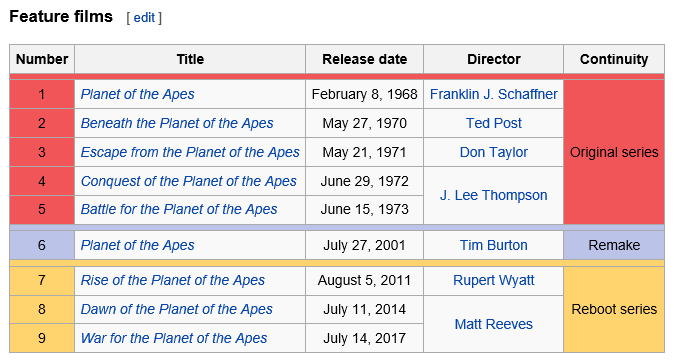 This involves watching the films in the in-universe timeline order presented in each of the films (which is a little complicated due to the alternative timelines and reboots involved). This looks like so (thanks to Gizmodo for this image): 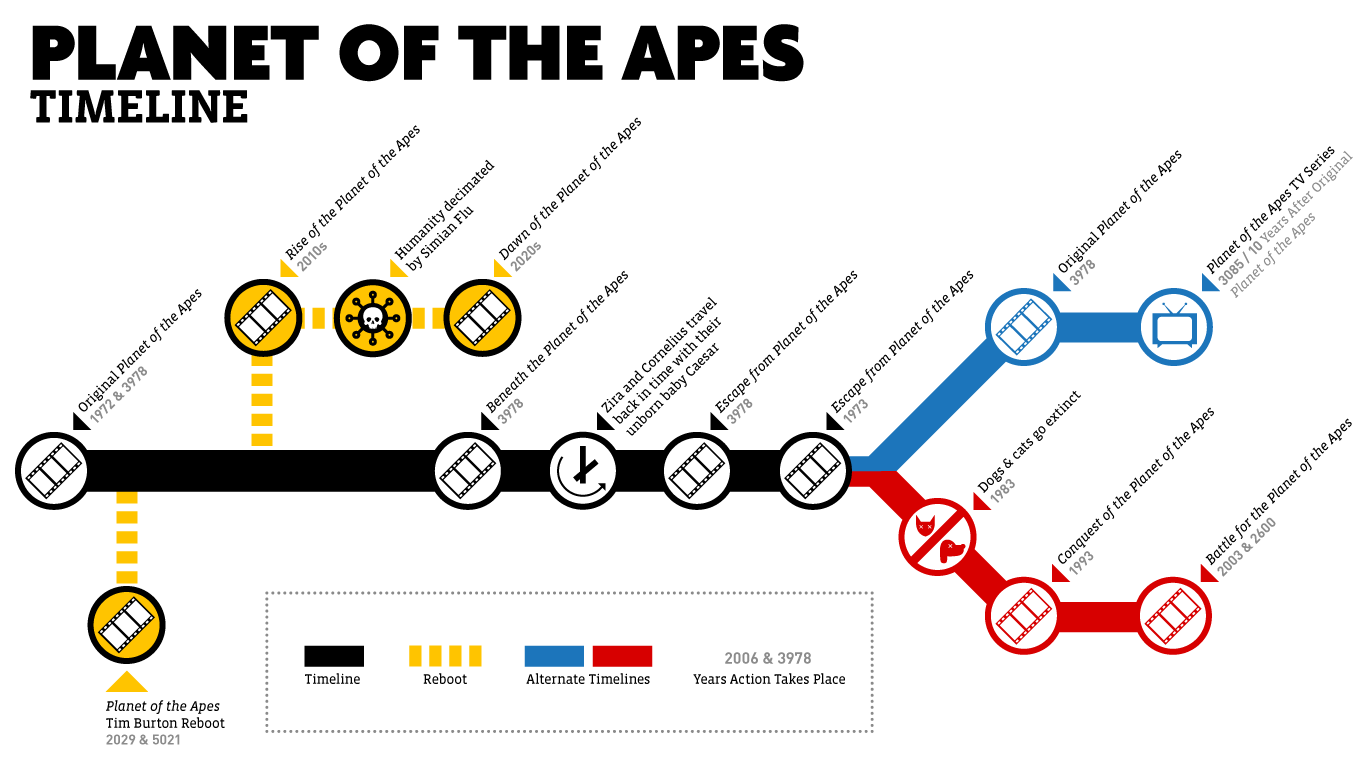 If you've never seen the movies, I'd recommend watching them in their release order, but with the film chronology, it seems this is really the truer order of events for the storyline, to me, if you want to follow how apes gained control of the world:

The TV series could have easily taken place during the time between the Space Station crash and Davidson's arrival in 5021, putting it between events in the rebooted Planet of the Apes, or set after Battle for the Planet of the Apes, in the given year for the episodes, 3085, giving a person the impression that the peace of 2670 at the end of Battle ultimately failed.

This is just the order I see of how events unfolded, when weaving in the newer movies into the story.

The subway-route looking graphs above are missing the point. It's a loop, and the 1975 tv series is in between the end of Battle for, and the state of ape world that is found by Taylor in the beginning of the original POTA. The chronology of the story arc is Escape 1973 > Conquest 1993 > Battle 2003 > Battle epilogue 2600 > tv series 3085 > original movie / Beneath 3978 > looping around to Escape again.

But it is probably best viewed in the order actually released, but with full context of the loop I just described.

The original versions were pressure made, people wanted more films, so they were made, watch the documentary DVD that comes with most box sets, and you will hear the pressure all were under to make one after the other. One thing I have worked out is that in the original, if Taylor and his crew never landed there would be no Ape planet due to the fact that it was his craft that sent back the three to past Earth, he started it and he ended it.

The new re-writes make more sense until War is released we won't know what comes next, but a little clue in Rise reports a missing space craft, so if no other is made after War you could probably link up Taylor and Brent and leave it at that.

24
Final scene in Planet of the Apes (2001)
6
Was Caesar supposed to have bitten off the neighbor's finger?
7
Is there any particular order in which one should watch the movies of Marvel Cinematic Universe? Why?
82
In what spot would the new Star Wars movie “Rogue One” go in the Machete Order?
7
Did Rise of the Planet of the Apes take footage from the 1968 movie?
7
What is the correct watch order of Arrowverse in 2017?
14
Time jumps in Star Wars
23
How to prepare for The Mandalorian?
12
How to be ready for The Rise of Skywalker?