Was the intense breathing of Mr Glass done on purpose in The Revenant or as filler?

In The Revenant, you can see Hugh Glass fight with a bear, he gets wounded badly. From that point on you can hear Hugh Glass breathe very loud & clear. Almost every time he's in the screen.

I was wondering if they did this on purpose or just as a filler of the sound of the movie, since he couldn't talk because his throat was slashed by the grizzly. Yet then again after his throat is somewhat healed, he can talk again and yet still the breathing remains the same.

Maybe it was done on purpose at the beginning and they thought it would be a nice filler to keep it up more towards the ending of the movie, even though Hugh Glass is recovering from his wounds?

In the source novel it was made rather more obvious that he had suffered a persistent throat wound as a result of the bear attack. His breathing is mentioned a considerable number of times afterwards, basically whenever he exerts himself. Although his throat eventually heals, his wound causes him ongoing problems.

Twice the litter spilled, dumping Glass on the ground. The second spill broke two of the stitches in his throat. They stopped long enough for the captain to resuture the neck, red now with infection. No one bothered to inspect the other wounds. There was little they could do for them, anyway. Nor could Glass protest. His wounded throat rendered him mute, his only sound the pathetic wheeze of his breathing.

Bridger turned last to the neck wounds. The captain’s sutures remained in place, though to the boy they seemed merely to conceal the carnage beneath the skin. The wheezing rumble continued from Glass’s unconscious breathing, like the loose rattle of broken parts in a machine.

Glass bent his left leg, then straightened it to push. Between his one good arm and his one good leg, he push-dragged himself across the clearing. The twenty feet felt like twenty miles, and three times he stopped to rest. Each breath drew like a rasp through his throat, and he felt again the dull throbbing in his cleaved back. He stretched to grab the blanket when it came within reach. He pulled it around his shoulders, embracing the weighty warmth of the Hudson Bay wool. Then he passed out.

and in the movie, you briefly see his neck wounds. Prosthetic shots are below. 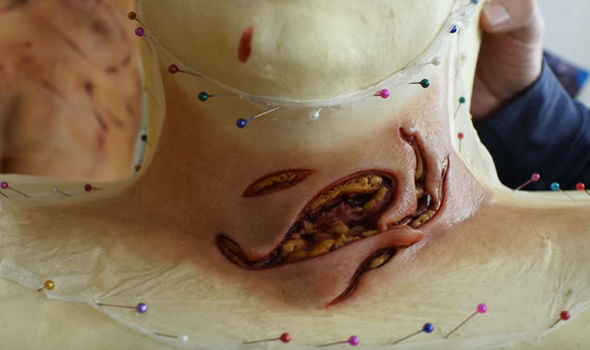 The other answers have already addressed the physical reasons for Mr. Glass's breathing difficulties within the story. There is, however, also a strong aesthetic component to this which likely makes it a conscious sound design choice beyond the necessity of realistically depicting Hugh Glass's apparent throat problems.

The film itself derives much of its appeal, both in-camera as well as off-camera in its production process's reception in the media, from a rather raw naturalistic atmosphere and a struggle with death and survival. Take for example the common close-ups of people's faces, especially Hugh Glass's struggle and the raw emotionality of him watching Fitzgerald kill his son, supported by his inability to act due to his injuries. Or how Glass is constantly on the edge of death and never recovers from his wounds throughout the movie. Or the general cinematography that tends to keep close to the scene and put you right in the middle.

In the same way much of the media coverage about the film's production concentrated on the apparent struggles with nature that real actor Leonardo DiCaprio had while filming and the "tortures" he was put through by the director (wich some people might even say had a significant part in getting him his Oscar for the role).

Now why am I mentioning this? To me, the constant sound of breathing emphasizes this raw fight against nature, as well as Hugh Glass's refusal to just give up and die. It shows both his struggle with breathing as adressed in the other answers, as well as a general emphasis of the raw essence of a naked human fighting against the forces of nature. Relate this also to the words repeatedly said in his visions/flashbacks:

As long as you can still grab a breath, you fight. You breathe... keep breathing.

Along the same lines, breathing is also prominently heard at the beginning of the end credits, as well as in original trailers like this one:

Not the answer you're looking for? Browse other questions tagged character sound-effects the-revenant .