I watched this episode around ten to fifteen years ago in Germany.

I'd describe the cartoon style as classical American.

I think the setting in this specific episode is partly at a military base.

Intro
During the beginnning, the main character plays in virtual reality and loses a fight. Then some slime appears in a military base, can attack people, sort of scan them, put them to sleep, copy their appearance, and, if i remember correctly, their knowledge as well. It gets one high ranking guy as well. And I think it uses his knowledge to start the countdown of some rockets. But I am not sure about this part.

Scene
The group is searching the slime and comes to a door which you can see throught where the upper body and face is. They see the high ranking guy's face on the other side and him suggesting them with his index finger to come closer. The next shot is from the other side. You can see that this is done by the slime, only the face and the hand are generated, but below them there is the slime.

Ending
The main character uses virtual reality googles and goes into the slime and fights him there and wins. Then the group uses the googles on the sleeping persons to get them back. 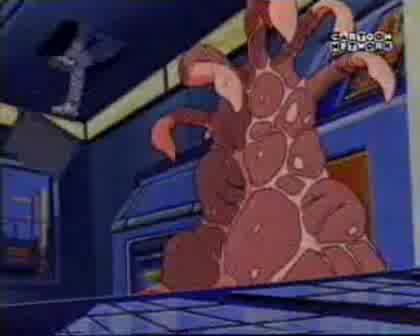 Then you've got The Real Adventures of Jonny Quest, season 2, episode 9, "DNA Doomsday".

One of the features of this series was "Questworld", a virtual reality world the characters would sometimes enter.

Not the answer you're looking for? Browse other questions tagged identify-this-movie horror animation action .