I'm looking for an example of a trope I know clearly in my mind but can't find a specific example to. I feel like I've seen it in numerous silent films but can't find it anywhere: A woman is being robbed while strolling the park, and a cop begins chasing the robber while the woman stands there in distress. The cop and the robber engage in a clumsy chase until the thief is accidently caught by a bystander, and the item robbed is brought back to the woman.

Of course, my illustration might deviate from the scenes that actually exist, but I was wondering if anyone here knows something remotely similar to what I've described?

Twenty Minutes of Love is an early Chaplin Keystone Comedy that involves sets of lovers and a stolen watch. It doesn't exactly follow the scenario you describe, but if it is a Chaplin film you are thinking of, than this is probably it!

If this is not it, you might look into other Keystone Comedies that do not feature Chaplin. They very much relied on this plot device.

The Films of Charlie Chaplin edited by Gerald D. McDonald, Michael Conway, and Mark Ricci gives synopses, photos, and press reviews for all of Chaplin's films. 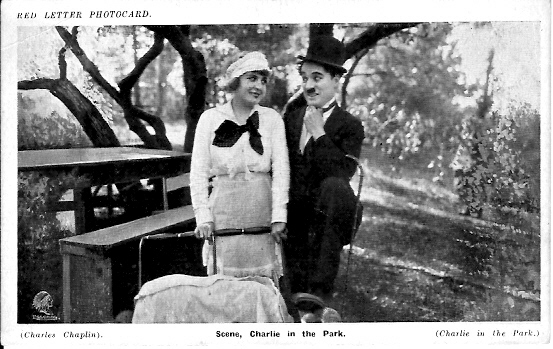 Charlie Chaplin's Essanay short In the Park(1915) has a very similar storyline. While a count (Leo White) sweet-talks a woman on a park bench, a pickpocket (Lloyd Bacon) steals her purse. When the thief meets Chaplin, he attempts to pick Chaplin's pocket, but Chaplin ends up stealing the stolen purse instead. It is next briefly stolen by Bud Jamison, but Chaplin retrieves it and gives it to nurse-maid Edna Purviance. By now, the purse's original owner has noticed that it is missing. She begs the count to do something, but he does not know what to do. She hails a local cop, who eventually finds the purse with Edna, who didn't know that it was stolen. The count is distressed that he could not find the purse, so he jumps in the lake to commit suicide. Chaplin quickly pushes Bud Jamison and the policeman in the lake too.

Not the answer you're looking for? Browse other questions tagged trope black-and-white silent-movie .

4
Silent film created after 1990
4
Trope for nonlethal force being used in film fight scenes?
6
Is there a trope for a pile-on fight?
14
Is there a specific “convenient parking” trope?
124
Why didn't silent movies have subtitles?
4
Banana peel trope: where does it come from?
9
How are intertitles (title cards) denoted in silent movie scripts?
81
Did silent film actors actually say their lines or did they simply improvise “dialogue” while being filmed?