Was the little girl at Lerner Airfield real?

When the passengers of Con Air arrive at Lerner Airfield serial killer Garland Greene goes on a little scouting trip and finds a little girl playing tea party at a deserted swimming pool. He talks with her a little and ultimately sings with her, and we're likely supposed to believe he killed her the same way he did with the one girl he "drove through three states wearing her head as a hat."

Now this scene always struck me as so surreal and out-of-place that I never was quite sure if she was actually real or not. There are certainly factors speaking for her to be real, primarily the fact that it is a rather straight-to-the-point film in the first place. We also see her at the end when the plane takes off, standing in a little trailer park and waving goodbye (revealing that contrary to our expectation Garland did not kill her). But then again, the fact that Lerner Airfield is supposed to be quite desolate somewhere out in the desert without any people nearby makes it rather unusual to find a little girl strolling around a desolate old swimming pool in the middle of nowhere (and where's that swimming pool even come from?). She also seems to be the only resident of that trailer park at all, if there even was one, since noone else showed up there.

Now it might very well be that I'm imagining way too much here and she was just a girl living there somehow. Or maybe it might even have been deliberately left open for interpretation. But I actually wonder about this scene each and every of the million times I've seen that movie now. So am I actually the only one wondering about that and, even more important, is there any secured information if the little girl Garland meets at Lerner Airfield (and the whole scene afterall) was actually real or just his imagination?

Yes, the girl was real. In an earlier version of the script (dated 12/8/95), the version of events, along with Garland White's thought process is delineated much more clearly along with a scene that was deleted from the final draft in which the girl's mother comes looking for her.

Given that the little girl (Debbie) is happily waving at the plane, the scene where her mother finds her was presumably dubbed redundant. 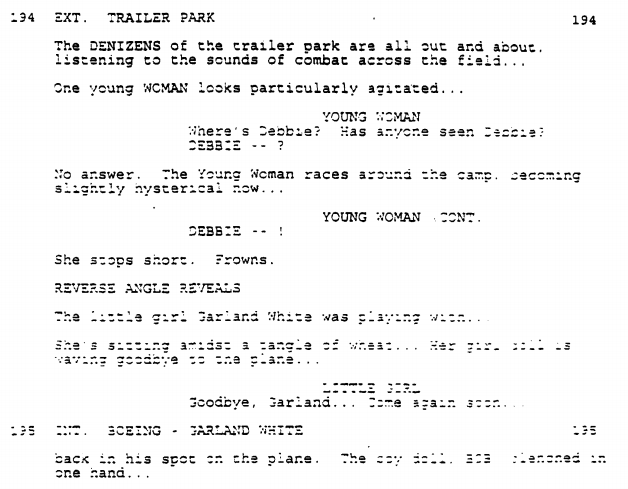 The information we were given having seen the doll, the pool, etc seems pretty secure.

I don't think Con Air is a very subtle film overall, and if you read this or look at it's ratings you'll know what I mean. Its main quote is 'put the bunny back in the box' and the bunny itself was thought of by Nic Cage, who then added some very basic significance and meaning to it, later explaining it in an interview.

So I don't think the little girl will have as meaningful a significance as we want her to. She probably mainly adds drama and intensity, something I felt when I saw the movie for the first time. Nothing can really redeem Garland from wearing someone's head as a hat, and, regardless of the intentions of the film crew, I don't think we really forgive him for that overall just for sitting with a girl for an hour without killing her. This said, we haven't really seen much of Garland's cruelty so far, so maybe we can forgive him just a little since the one act we did see him do was not a bad one (compared to all the other criminals who were vicious throughout the film).

The little girl could be there to give us a sense of the madness and confusion of this scene and the criminals. You expect Garland to kill this little girl (or even to try to do so if she is in his imagination), but he doesn't - not in real life, not in his imagination. Cameron Poe shines out more when this has happened, for dealing with these criminals, saving people, not leaving the plane when he had the chance to, and being so honourable in all the time.

When we ask ourselves whether or not the girl is real, we delve into a series of 'Maybe she was just there for the summer?'-type assumptions and questions which are useless and don't help us understand her. If you need to think too much about whether a character was real, often you just need to leave it and consider the importance of the character regardless. Here we know that, whether the girl is real or imagined, Garland didn't kill her and doesn't seem to have tried (I think we would have seen it had he done so) when we expected him to.

I also think she is real based on what we see, but we couldn't really know.

I felt like she was there to give Garland a little bit of humanity to his character instead of just a ruthless killer. I think that her approach to him as friendly and not fearful and the fact that she asked if he was sick and having him admit to her that he was...and after admitting he was sick she still accepted him and wanted to play with him...smiling not shying away from him.....was part of the reason he did not kill her...I didn't find her playing in the pool as odd...its common for poor run down trailer parks to pop up everywhere and they showed signs of life in the trailer park..laundry on clothes lines etc....I actually find it normal for a child who lives in a crowded trailer to seek a solitude area like the abandoned pool to be "her space" to play...if she has brothers and sisters a trailer doesn't offer much privacy....

she was real i also think she helped the character of Garland Greene she asked if he was sick took medicine he told her there is no medicine for what he has she ask if he wants to sing a song asked if he knew "He's got the whole world in his hands" she did something that was different than anyone else she did not judge him! Adults judged him all the time and this child did not do that! He seemed different after he was with her playing and singing he seemed relaxed calm and happy! As the plane was going down he even was singing that song. It seems she some how got threw to him where no one else did she understood him on a level that she was that showed him it was possible to become a better person!

Not the answer you're looking for? Browse other questions tagged plot-explanation analysis con-air .

21
How was the bank robbery completed?
19
Who is the third girl in “Black Swan”?
6
Is there any purpose to the short fade to white?
11
Why did no one seem to question whether the girl on the plane was real?
7
Why eels don't attack in the pool in “A cure for wellness”?
3
What was the ending of Night Moves about?
3
Are the supernatural events real, illusions or a state of a character's mind at the time?