How do actors avoid looking into the camera?

When I am watching movies I seem to never catch actor's direct look into the camera. If you ever being filmed you will know how difficult it is to avoid the camera pointed at you and I can only imagine how many of those cameras are involved during filming.

I could attribute this purely to professionalism of actors, however, what is the key in avoiding the camera during filming?

It's only difficult to not look into the camera for you because you're not used to being around them. If someone's taking a photo or video of you, you're "trained" to look at the camera because it's generally a portrait-style shot.

Actors are trained to not look at the camera. Looking at the camera is called "spiking the camera" and it means that you've just ruined a shot and you have to start over... congrats, you just cost the company money. As the TV Tropes article points out, editors don't always catch these, so you may see them in films and TV:

A specific form of Breaking the Fourth Wall accomplished merely by looking directly at the camera. Usually done by accident, by amateur actors who happen to notice a camera is pointed at them. The trouble here is that the editor didn't catch it, allowing the character to make eye contact with the audience. Typically a film or live TV trope, especially in dramas.

Trust me, even for new extras, you've had "don't look at the camera" so drummed into your head from the second you set foot on set, it's running non-stop through your mind that it's the only thing you're thinking about.

On set, directors will give actors a specific eye-line for where to look. Usually they're looking at another actor... the person they're doing the scene with. This is beneficial for performance reasons. If the person they're acting opposite isn't available due to scheduling or they're in makeup, or something else, they often have someone else there to deliver lines and act as eye line. 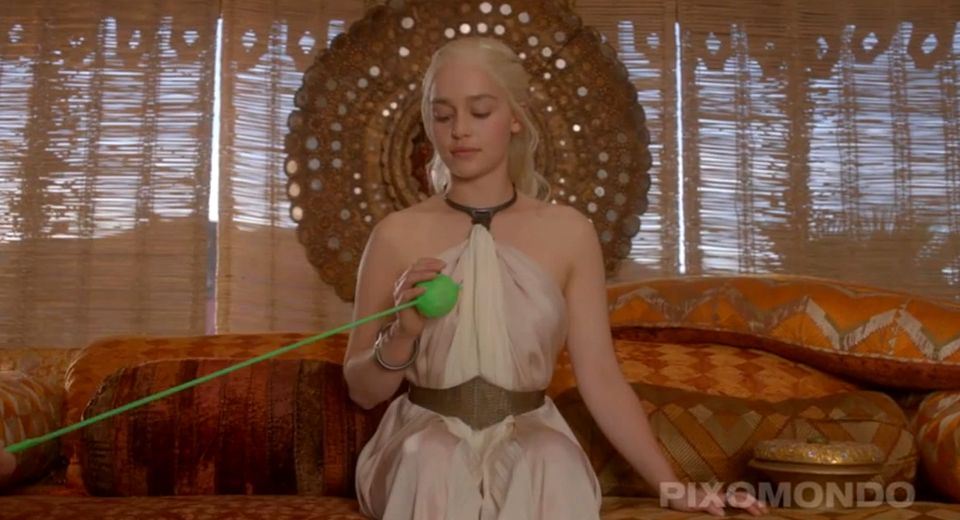 And, finally... and probably most importantly... if you're good at acting, you're so involved in what you're doing that everything other than the person/people you're acting opposite simply fade away into the background. If you're doing it right, the cameras, director, lights... everything else... it just goes away and it's just you and that other person having a conversation or fighting a monster or watching TV...

Aaron Taylor's "Theorizing Film Acting" speaks to this issue. Basically it's become such a major faux pas that anyone who has a tendency to look into the camera (other than when slating) will almost certainly find themselves unable to find work. It's therefore a self-fulfilling prophecy that if you're the sort of person who finds it hard to direct their attention elsewhere, acting probably isn't the right career for you.

I've seen some hint/tips on offer, largely aimed at ensuring that you focus your attention on the scenery around you and your acting partners. Most actors have a "process" (usually a form of Method Acting) where they attempt to envision themselves in the scene rather than viewing themselves as an actor acting the scene. This allows them to give the illusion of not really noticing the camera.

Marcus online has some acting tips for kids that might be useful;

Make sure to get a good reader to read the lines opposite you. Your reader should stand RIGHT NEXT TO THE CAMERA, almost straddling the tripod. Direct your lines to your reading partner so that your eye line is not into the camera, but just slightly off, connecting with your reading partner’s eyes.

Please read the script beforehand. We need you to be prepared and as off-book as possible.

I had trouble with this during my first year of a media studies course as the director/cameraman filming a short film. I had to make a lot of creative edits because my actors (friends who had a couple of hours of spare time) kept reacting to the camera.

I understand what you mean, it is very difficult to maintain the persona of a character whilst having a camera pointed at you. Avoiding looking in the direction of the camera is almost as bad as looking at it directly, it's less noticeable but it still ruins the illusion. The task for the actor is pretending like it doesn't exist at all.

The general consensus for achieving this appears to be staying so heavily in character, that the cameras cease to be a part of their surroundings. Therefore the actor blocks out any camera/ lighting/ microphone movements, because the character is not noticing them (because from the character's point of view they do not exist).

One of the best tips I've given actors who have this problem to to have them blink if they're turning their head in a way that would usually have them look at the camera. Once they got the hang of it, it became second nature and they don't have the issue.

I would say they are used to cameras and Professional actors are very focused in their play, they cant allow themselves to have the time to look into the camera, because they would break character.

54
How do actors make eye contact with CGI characters?

44
The most actors playing the same role in one movie?
86
How do actors memorize extremely long scripts?
54
How do actors make eye contact with CGI characters?
49
What accent did the actors use in Black Panther?
118
How do actors stop breathing when playing "dead"?
2
How do actors while doing a scene focus on their scene regardless of having a crowd in their surroundings?
26
How do actors control laughter in comedy scenes?
35
Why would the Actors Studio mistrust the acting technique employed by Anthony Hopkins?