What is the material of Captain America's shield?

I had seen the movie, but i didn't get the name and the description that what is the material of Captain America's shield?

It is an entirely fictional material created solely for the Marvel Universe.

To quote from its wiki:

Vibranium is a rare, naturally occurring meteoric ore, theorized to have an extraterrestrial origin; later proven true. It has been found in two distinct varieties and was most abundant in Wakanda.

Vibranium is not as hard or dense as Adamantium, but it is still very durable. Being more malleable it is also easier to make objects out of, such as the mesh costume the Black Panther wears. Vibranium absorbs more impact than adamantium and sometimes can release it.

Howard Stark gives us a nice intro in Captain America. It's a fictional element known as "Vibranium".

In the comics, Cap's shield tends to be described as a vibranium/steel mixture that was created by accident (and which can't be replicated). 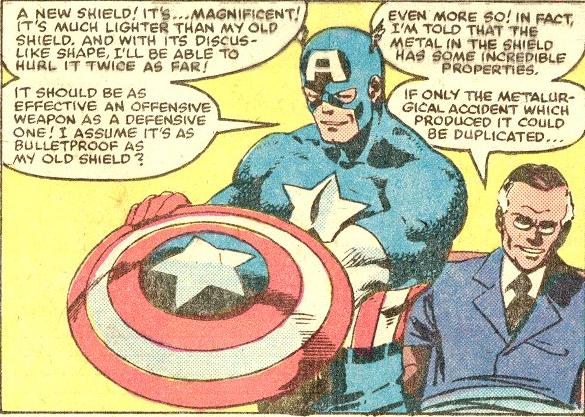 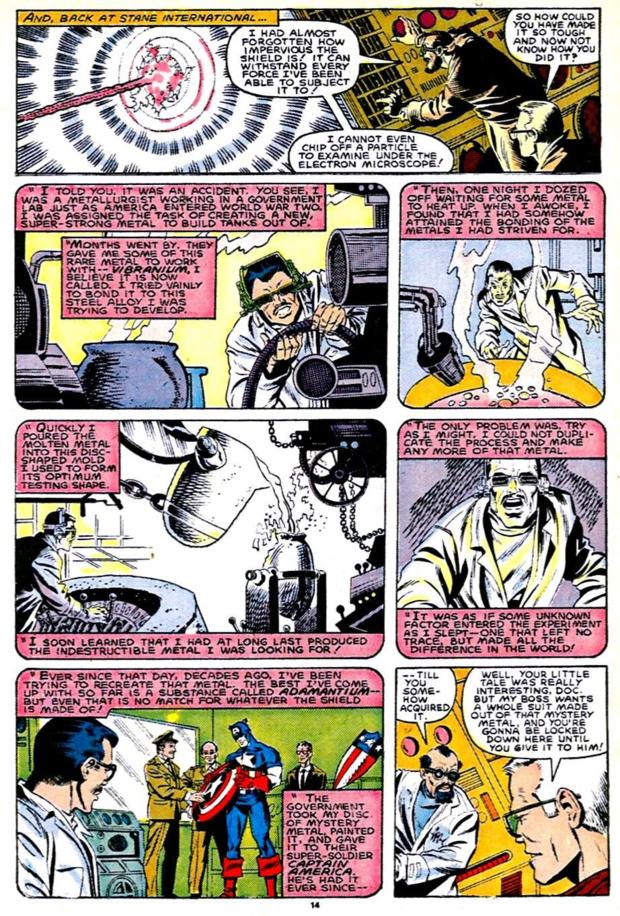 The shield is supposedly just Vibranium, a fictional rare metal from the fictional hidden African nation of Wakanda (Home to the Black Panther who will be in Captain America: Civil War). Nothing indicates it's an alloy or metallic blend.

It can absorb kinetic energy, so any physical attack like punching/kicking/shooting/hammer/falling down on it gets absorbed. Or repelled / redirected. It's inconsistent. Bullets both drop flat and ricochet. Thor's Hammer and Iron Man's repulsor beams redirect.

Howard Stark: "No! No! That's just a prototype."
Steve Rogers: "What's it made of?"
Stark: ""Vibranium. It's stronger than steel and a third of the weight. It's completely vibration absorbent."
Rogers: "How come it's not standard issue?"
Stark: "That's the rarest metal on Earth. What you're holding there? That's all we've got."

Vibranium was later used in The Avengers: Age of Ultron as the applied phlebotinum that gives the Vision his technorganic body, Ultron a new robotic body, and powers the giant engine that turns Sokovia into a Colony Drop weapon. It can do anything the writers want it to do.

Cap's shield has gone through multiple retcons, changes to its origins. It's originally "Adamantium, Vibranium and Uranium", but then retconned to be Proto-Adamantium, a mixture that includes Vibranium and unknown metal and catalysts. It was created by accident as the scientist FELL ASLEEP during its creation. It is the strongest material in the world. And it is what various scientists try to recreate (much like Cap's super soldier serum). They failed at recreating it, but still made the second strongest material, when they created Wolverine's Adamantium, known as "True or Primary" Adamantium.

It's current 616 Main Universe status, which may be currently ignored or unreferenced, is that it's also part Uru, a fictional magic metal, that is used in Thor's Hammer. This was after the shield was destroyed, and then fixed by the Dwarven Blacksmiths who made Thor's Hammer.

Not the answer you're looking for? Browse other questions tagged marvel-cinematic-universe captain-america-the-first-avenger .