What is the significance of the Vichy Water scene at the end of Casablanca?

At the end of Casablanca, we see Captain Renault open a bottle of Vichy water: 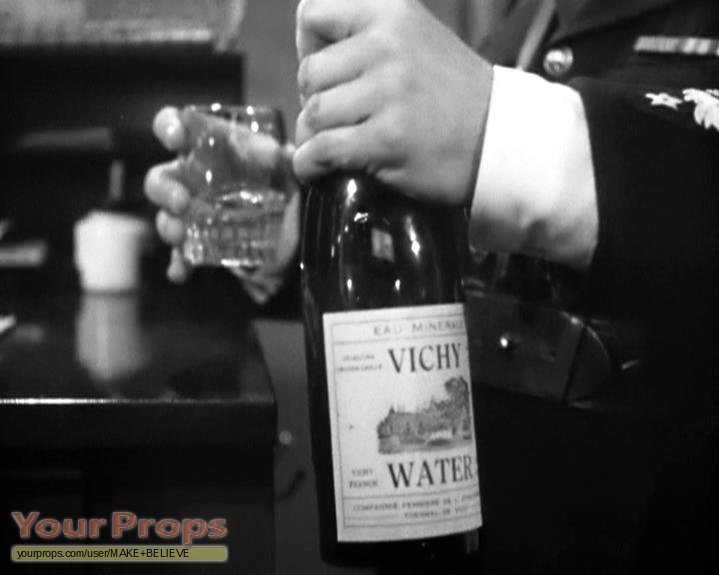 He pours himself a glass of it, before binning the rest of the bottle. Given the prominence of the label and the exaggerated nature of the scene, it clearly symbolised something. What was it intended to demonstrate?

In the script, the scene plays out as follows:

Renault walks inside the hangar, picks up a bottle of Vichy water, and opens it.

Renault: Well, Rick, you're not only a sentimentalist, but you've become a patriot.

Rick: Maybe, but it seemed like a good time to start.

Renault: I think perhaps you're right.

As he quickly pours the water into a glass, Renault sees the Vichy label and quickly DROPS the bottle into a trash basket which he then KICKS over.

He walks over and stands beside Rick. They both watch the plane take off, maintaining their gaze until it disappears into the clouds.

Just before this, Rick has shot Major Strasser dead.

It appears that this action, and his "becoming a patriot" in the eyes of Renault, inspires Renault to do the same.

Vichy was an unoccupied region of France that persecuted Jews and collaborated with the Nazi government.

By binning the entire bottle of water, he is symbolically severing his ties with the corrupt Vichy government and the entire Nazi regime, thus becoming a "patriot" himself.

This is a complete turn from his character earlier in the film, where he clearly looks out for himself, regardless of whether that means helping the Nazis or the French interests.

This turn in character is clearer in the scene afterwards, when he and Rick plan their future lives together - on the same side.

Maybe it's not that deep. Major Strasser loves the good life especially champagne. Perhaps he mistook the bottle for wine and realized it was water which it's likely that he rarely drank...so he trashed it.

Not the answer you're looking for? Browse other questions tagged analysis ending casablanca .

11
Ending of "Bad Lieutenant: Port of Call New Orleans"
5
Who is Bruce and does he have a real-world counterpart?
6
Whom or what is the whale supposed to symbolize?
11
Symbolism of eating as a main human activity
9
Was the Devil's Advocate showing multiple attempts to corrupt Kevin?
8
What answer can take care of all their questions in Casablanca?
12
What are the stories Rick heard in Casablanca?
11
What is the significance of the beginning scene in The Shape of Water?
5
What is the unprecedented significance of the movie Casablanca?
7
The path-on-the-map scenes in Casablanca and Raiders of the Lost Ark