Is it realistic that the guy that falls down in the Raptors cage survived?

In Jurassic World, in the raptors cage scene (where Owen interacts with the raptors), a guy falls down in the cage trying to catch the little pig that is running around.

That guy falls down from a high bridge and he falls to the ground on his back.

Shouln't that guy die after this high of a fall?

According to the answer posted by @Andrew Martin, that guy is uninjured after the fall. He runs away when Owen gets in the cage. If he doesn't die, is it realistic that he's not injuried?

People can survive really, really big falls. See this Guardian article. It is one of many which cover people who have survived miracle falls. From it:

In 1972, Vesna Vulovic, a cabin attendant, survived a 10,160m fall when the DC-9 she was in exploded over what is now the Czech Republic. Earlier this week, a 102-year-old woman survived after toppling from her fourth-floor balcony in Turin. Fortunately, her fall was broken by a children's playhouse.

According to another section of the article:

Falls can kill by inflicting damage to any number of vital organs, but the most common reason is due to a key artery's route through the body. "Most people who fall from a height die because they fracture their spine near the top and so transect the aorta which carries blood out of the heart," says Sean Hughes, professor of surgery at Imperial College, London.

So I suppose in the Jurassic World case, he didn't suffer any damage to vital organs and the fall therefore didn't kill him.

It was a long drop, but people have fallen from even higher!

The character is injured when they get up. They stumble - they're certainly not running! Additionally, remember that sheer adrenaline can allow the body to do some pretty amazing things - including giving someone who has fallen a long way the ability to try to stagger away from certain death.

From How far would you need to fall for it to be fatal? answer on another stack, backed by NASA documents:

7 meters being 22.9 feet. Just over 2 Stories of a standard building (Roughly 10 feet each story). Eyeballing it, based on the height of the wall divisions, and general number of steps required to get to the top, the raptor pen does seem to be around 20 feet/2 stories.

The character lands on soft wood chips on top of soft dirt, not hard concrete. And he doesn't land on his head. He flops on his back, kinda. He falls, braces a bit with his arm and leg. 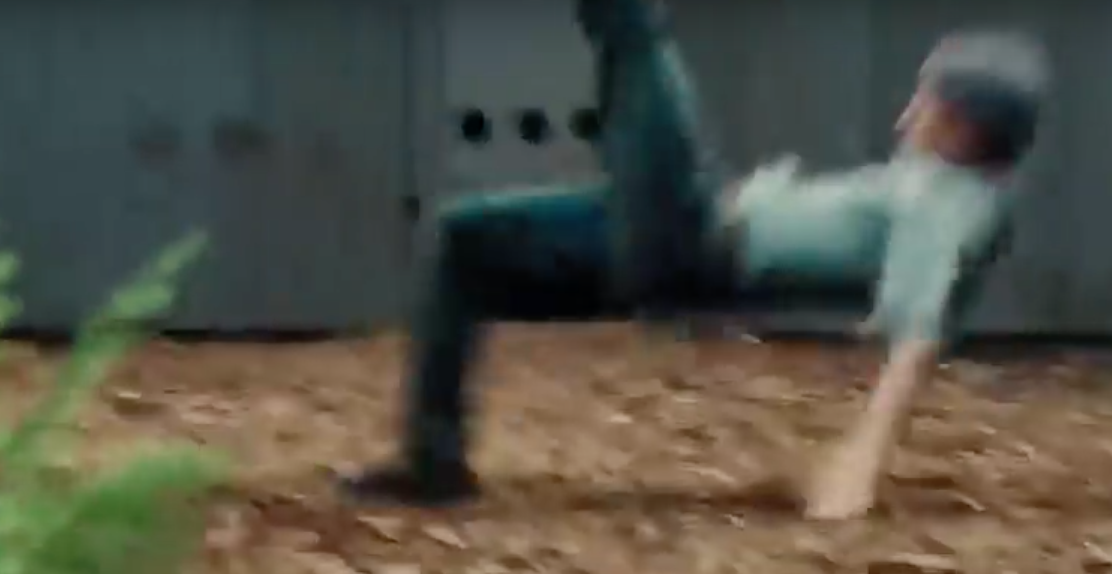 It's unlikely that he would have any life risking injuries, but if you ever belly or back flopped in a pool, you know he will be in pain later that day. Bruising, swelling, soreness, at minimum, maybe a dislocated shoulder or cracked coccyx at worst.

The character also doesn't get up and run, he crawls, backwards, to the cage door, and is still sitting down when Owen escapes the pen. When he gets up, and the camera pulls out, he gets up Limping and Stumbling out.

Not the answer you're looking for? Browse other questions tagged jurassic-world .

4
How did Utah and Bodhi survive 800 meter waterfall drop?