Why aren't the characters floating two levels down?

If level 0 is the reality, the characters in the van are at level 1. The van drops off the edge of the bridge and goes into freefall. At level 2, in the hotel, they experience the freefall as well. But then, at level 3, at the fortress, (and for that matter, in limbo) there is no freefall. Why is it so?

It is slightly odd, because other senses appear to be able to penetrate more than one layer, although they are severely attenuated.

For example, when they are in Level 2 - someone says "did you feel that, was that turbulence on the plane" (which is Level 0), to which Eames says "no, too close, Yusuf's driving probably". He doesn't say - "of course not, you wouldn't feel anything down here, must be Yusuf's driving". Then there is the Edith Piaf song used to synchronize the kick. That is played by Yusuf into Arthur's ears in Level 1, yet is heard (faintly) in Level 3. Then there is the 'second kick' that they experience when the van hits the water, this is felt in Level 3 - showing that something should be felt of the free-fall even at that layer.

Still doesn't spoil my enjoyment of it though.

Best explanation is the time mechanic. Because time and other physics means for so little that deep, it could be that they are just deep enough that they do not feel it. Briefly going over the scenes of the movie, they appear to be strapped down in order to not cause this free-fall effect.

A more simpler explanation is that it is just an oversight on Nolan's part.

The freefall was to wake them up from the next level (so they would feel it!)

This is how I see the "falling" happen:

Back up to level 0 with main freefall

I think because when the van drives off the bridge in level 1, that is the 'kick' for the hotel level. When JGL activates the kick in the elevator, they feel it in the snow level.

One possible explanation for this is that as time multiplies with each dream level, the effects from the upper level would be felt gradually. For e.g. In level1, the van falls into the water

as a result, in level2, we get the zero gravity effect because the van is in free fall- 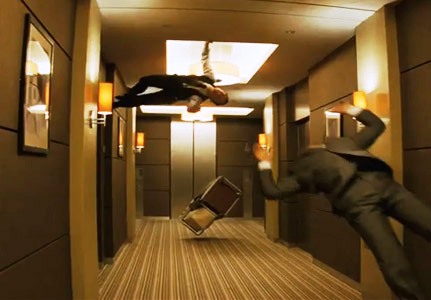 and in level3, we have the snow avalanche -

now, the van hit the bridge, started its free fall in water. Normally this would take about 20seconds. In level2 the free fall gives them zero gravity for a longer period, assume 10min(time is multiplied in inner dream levels). And in level3, this effect would occur even more gradually. So now we have 10min maginified, that makes it say 2-3hours. The other effects would have gradually occured in that level too. But as you know, the kick : level1 van hitting water, level2 lift propulsed with explosives resulted in the avalanche. That means, that before those effects from level1 could have reached level3, the kick from level2 actually reached level3. And the people got out of there quickly, they did not remain in level3 long enough for the effects to have taken place.

Perhaps this can be explained by assuming that:

Premise (2) relies on the idea that the purpose of a kick is to wake up all of the extractors at level 0. You may have experienced something like this when you are having a nightmarish dream and something extremely violent happens in the dream that causes you to suddenly sit up in bed.

If you think about a kick as originating inside the dream and travelling upwards, its downward effects (if any) become irrelevant other than as a warning that all of the dreams are about to end. It seems that each level needs an upwards kick since Arthur scrambles around setting up a kick with the elevator at level 2. Not sure why lower levels need an upwards kick, a level 1 to level 0 kick should suffice.

They used a different sedative on level 2

On level 2 they are completely without gravity. You're right - had they used the same sedative, they should be fully floating in level 3 (snow fortress) too. Since the inner-ear function is dampened however, they only notice the strongest sensations: the jerk (change in acceleration) when the van drives off the bridge and the second jerk when the van hits the water. They are "deaf" to the acceleration when it is stable (0 when the van is standing on the bridge, 1G when the van is falling) and the dream defaults to the standard situation Eames is used to: normal gravity.

Not the answer you're looking for? Browse other questions tagged plot-explanation inception .

2
Why was the zero-gravity effect not transferred to the third level in Inception?

113
At which dream level did Inception end?
15
How does Ariadne know that Saito is dead in the upper level?
5
Is coming out of a limbo easy or difficult?
6
Where does Limbo take place?
6
No Kick In Higher Level means they're stuck
3
Why did they kick these two characters off the boat?
1
Why was it necessary to rescue Saito from limbo?
10
Why the difference in Cobb's reaction to limbo?
4
How do Cobb and Ariadne enter Limbo without having to die?