What exactly is shown on the pagers carried around in House MD or Scrubs?

It seems that the cast can get to know almost anything just by reading the page that they get: whether there's an emergency with a patient or where they are being called to?

I thought pagers just showed a particular number which the doctor had to call separately to find out what the emergency was, at least that's what I noticed many a times in other medical shows such as Scrubs. Or is it that since Scrubs began in 2001 and House MD in 2004, the pagers have improved in that span?

99% of the time that a physician receives a page, it is within the hospital, receiving status on a patient or being called to an emergency. These are communicated through codes throughout the hospital that all staff is aware of.

Pager technology has always allowed arbitrary alphanumeric (A-Z, a-z, 0-9, some special characters) messages of various lengths. How they are used depends on the person or company using them. Typically, short medical codes can be used, to indicate a longer or complicated situation, but proper length messages can be sent as well. Pagers can scroll messages that are longer than the display, so they are not limited to 10 or 16 or n Characters. Depending on the service really, as some have a 240 character limit. Text messages, aka SMS, in comparison are limited to 160 ASCII characters.

Tangent: No different than SMS, except most pager companies have dedicated hardware/antenna, and for medical contracts, have some minimum guaranteed service contracts. These service contracts dictate downtime, message delivery times, etc.

SMS is a fairly faulty protocol and has somewhere like 10% failure rate, requiring 15~20% resend rate. SMS is an (ab)use of the cellular side bands, bands that are normally used for control between a cell phone and tower. SMS is a giant cluster hack of a technology. SMS/Cellular technology, mainly the wavelength/bandwidth being used, was previously very bad at wall penetration, while Pager tech had much better coverage. Distance was also a factor (Cellular cell sites are often >20 miles at best, Pager sites are 100+ miles). There is also the usage of Simulcasting/broadcasting of Pager messages among multiple cells, while Cellular technology will only connect on a single cell tower. There are multiple technological reasons for Pager technology still being persuasive.

As we never see the messages on House, it's speculation on whether it is code or text.

I know this is a little late, but here is what is shown in a pager in S1E9 of House. 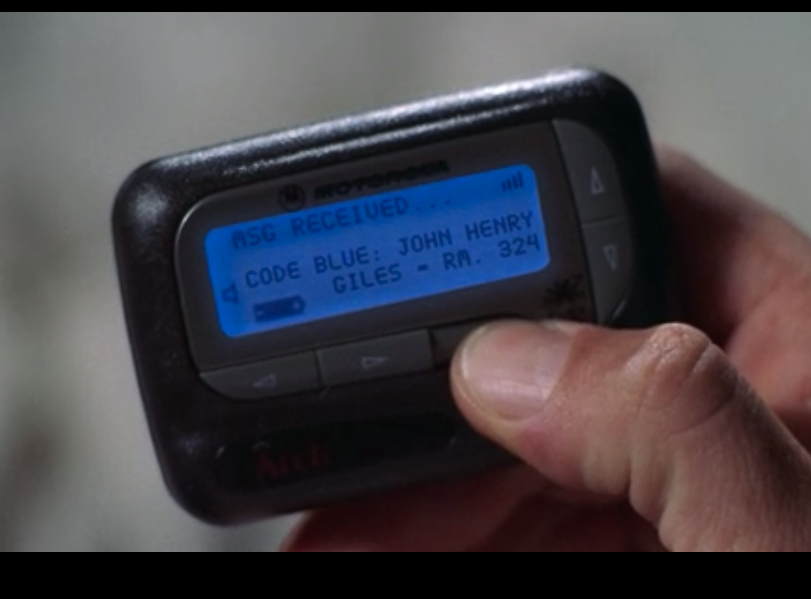 Not the answer you're looking for? Browse other questions tagged plot-explanation house scrubs .

13
How accurate is Scrubs' depiction of the medical profession and the community?

17
What was the “It Could Be” running joke on House MD?
3
What did Gregory House see when he electrocuted himself?
5
What actually happens between House and Stacy Warner that she left House in House MD?
7
Who is the medical jargon shown in House MD attributable to?
13
How accurate is Scrubs' depiction of the medical profession and the community?
2
What is the cultural context to "Cal Turk" (White version of Turk) joke in Scrubs?
10
Why wasn't Dr. Cox sued or fired after a patient dies because of his negligence?
1
How was Dr. Kevin Casey with severe OCD able/allowed to perform surgeries?
8
What is the relevance of this scene in the House intro?