Is the jewellery in the 2016 adaptation of War and Peace genuine?

I've been watching the 2016 BBC adaptation of Tolstoy's War and Peace, and also reading about it on the internet between episodes. One of the rumours I've come across is that the jewellery used on set was genuine: the actresses were actually wearing real gems and diamonds during filming. 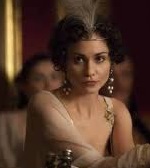 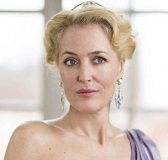 Is this true? If so, where did this jewellery come from - was it borrowed from a special collection somewhere, or was some of it even custom-made?

Shot on location in Russia, Lithuania and other Eastern European countries, characters are seen wearing jewelry made by Russian jeweler Petr Axenoff.

Part of the collection was made specifically for the TV series. Other items were selected by Gibbon's team from existing collections. "We were surprised by their choice because the jewelry they selected was from a later period, specifically art nouveau. When I was making those items, I was inspired by completely different things," Axenoff says.

Based on interviews with the show's makers on the BBC blog, it would seem that they also supplemented the Axenoff items with paste jewelry and some bits and bobs from the BBCs own prop archive:

Jewellery is still all about impact and making a statement. For me in War and Peace it's a great way to accessorise the very simple gowns that we wanted to create - free from too much surface decoration and unnecessary ornamentation. The jewels were sourced from all around the world. From Indian markets in Southall, flea markets in Lithuania, St. Petersburg, Prague and Rome to beautiful pieces designed especially for us by a Russian jeweller.

The action of the story takes place at such an interesting time for fashion. It is where we see the birth of modern fashion as we understand it today. The aftermath of the French Revolution saw people turning their back on formal aristocratic styles. And this was coupled with Napoleon’s visionary ideas to create more revenue for French fabrics by creating the fashion seasons, changing four times a year as they do today. And fashion is cyclical, everything goes round.

"Edward K Gibbon is the costume designer for War and Peace."

Not the answer you're looking for? Browse other questions tagged props war-and-peace .