I have just been reading Wiki on the term "Blockbuster" popularly used to describe a highly popular action movie. Here is an excerpt:

"...a fast-paced exciting entertainment, almost a genre. Audiences interacted with such films, talked about them afterwards, and went back to see them again just for the thrill." - Source

However I still do not understand the root of this film industry term, what does it mean?

Originally the word was used to describe large bombs dropped during World War II that could quite literally destroy an entire city block, or a "blockbuster bomb".

The origins of the term when it comes to film, according to Wikipedia:

In film, a number of terms were used to describe a hit. In the 1970s these included: "spectacular" (The Wall Street Journal), "super-grosser" (New York Times), and "super-blockbuster" (Variety). In 1975 the usage of "blockbuster" for films coalesced around Steven Spielberg's Jaws and became perceived as something new: a cultural phenomenon, a fast-paced exciting entertainment, almost a genre. Audiences interacted with such films, talked about them afterwards, and went back to see them again just for the thrill.

The gist is that people would, "Line up around the block," to see these films, when theaters were much smaller and had only a few screens, unlike today's multiplexes. So they quite literally "busted the block" as a single city block couldn't fully contain the line. Borrowing from its wartime connotation, the line of people could almost be said to have destroyed the block, as they could almost certainly bring foot traffic to a halt. 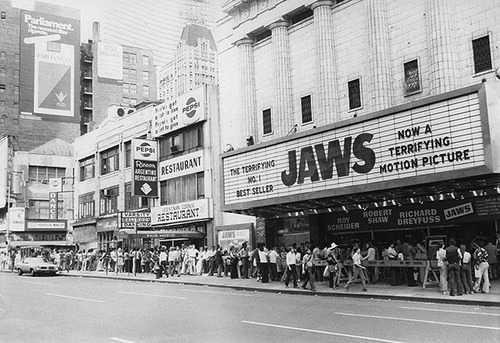 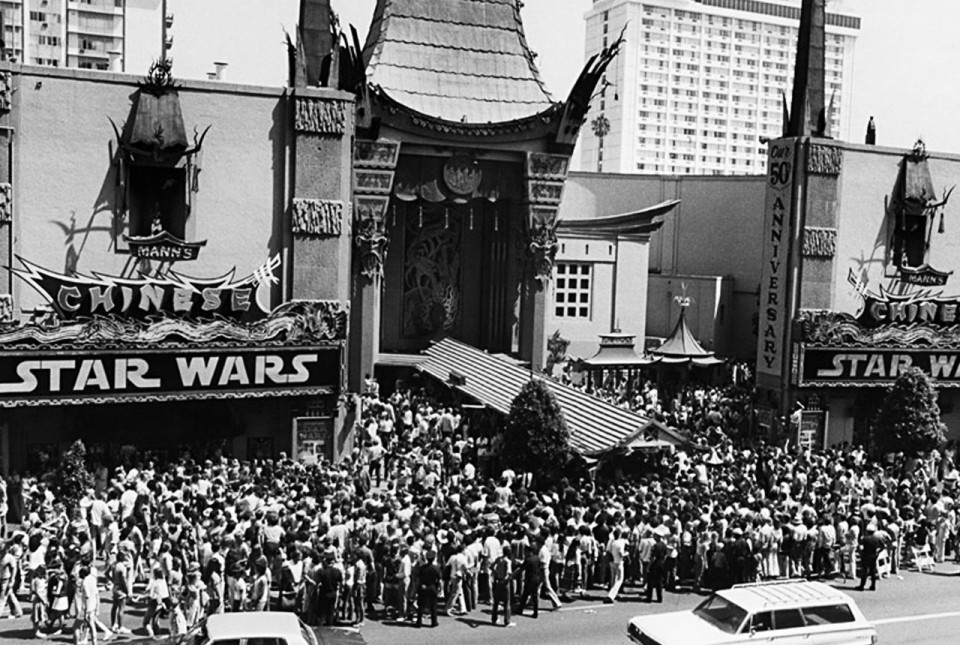 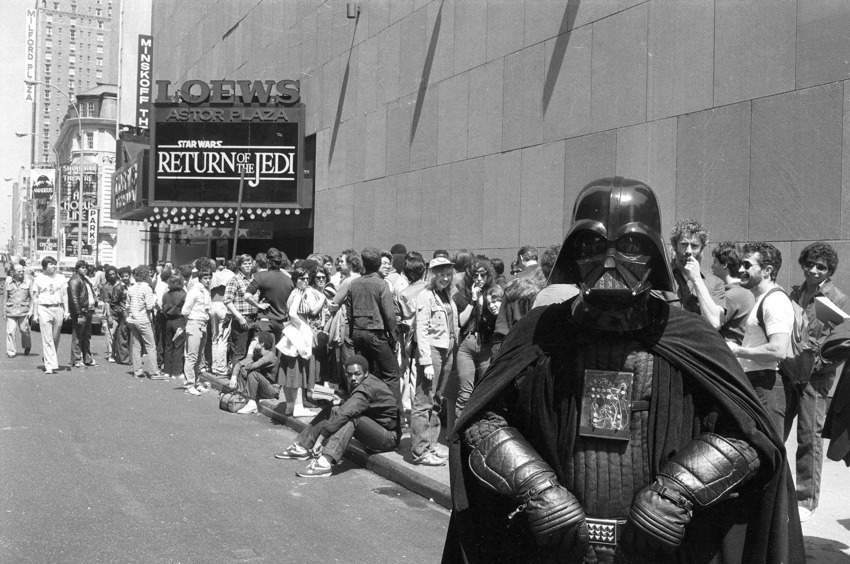 The word is from a World War II bomb, and its usage in media dates back to the first war films and the media which made word plays out of this fact to describe the films as "block busters".

Google Etymology metrics track common usage of the word by the public, outside of specialist reporting, to start to grow in the 1970s (likely with big blockbusters of the age, such as Jaws).

The 2004 novel Blockbuster: How Hollywood Learned to Stop Worrying and Love the Summer largely attributes this to The Jaws films. This is the book the Wikipedia article references on the subject.

This tallies quite well with Google's etymology metrics of the word, which can be seen here. However, the word itself was used to describe movies, much, much earlier.

There's a fascinating article called Pass the Ammunition: A Short Etymology of 'Blockbuster', written by Sheldon Hall, which describes where the word originated from. I strongly encourage reading it if you're interested in the word's complete origins.

He mentions at one point:

...I was subsequently alerted to an earlier use by Jeffrey Richards’s book Hollywood’s Ancient Worlds, which quotes a review from the British Daily Mirror, dated 22 December 1950, of Cecil B. DeMille’s Samson and Delilah (1949), predicting it, too, to be ‘a box office block buster’.

So it was certainly in some sense used, to describe films, in the early 1950s.

By the mid 1950s, he discovered Variety articles describing a blockbuster as:

[a film that grosses] $2,000,000 or more in domestic (U.S. and Canada) rentals’ as well as ‘a relatively expensive picture that can head the program in all situations’.

In fact, by the mid 1950s, it was in common use in film and media reporting.

Hall then chose to study a number of common conceptions about the origins of the phrase.

One of these is the idea of "block booking" - the system of distribution in which the cinema was obliged to book an entire year’s output from a major studio rather than being free to choose only the particular picture or pictures desired. He noted that in some cases, a highly anticipated film (such as Gone with the Wind was sometimes presented on a singly basis to the films, as opposed to in a unit, and thus corresponds to our understanding of a block buster.

However, he notes that by the time the term block buster entered common parlance, the era of block busting was over - so this explanation doesn't make much sense.

The second conception he studied was the idea of a city block, and the term originating from "block busters" being popular films people literally queued around the block for. Whilst it's conceivable this is how it became a famous word, again the term was already in place before this.

Instead, the first recorded use of the word "blockbuster" was in describing a World War II bomb. This is interesting because the earliest recorded instance he could find of a motion picture discussing Blockbuster was in May 1943, for the film Bombardier. To quote from his article:

The tagline reads: ‘The block-buster of all action-thrill-service shows!’. (Blockbuster was often hyphenated or written as two separate words in this period.) As the film’s title indicates, the choice of metaphor was a deliberate play on the story’s dramatic content, which concerns a squadron of trainee bombardiers and climaxes with an aerial assault on Japanese munitions factories.

Not surprisingly, reporters, reviewers and editorial copy-writers for the trade press also began to exploit the word for its shorthand descriptive vividness, albeit as a way of indicating commercial potential rather than a role in the war effort. Thus MGM’s combat film Bataan (1943) was trumpeted in the company’s house organ The Lion’s Roar as ‘a block-buster to scatter those wise guys in the industry and the press who are always telling us that the public won’t support war films.’ Paramount’s No Time for Love (1944) was described by Boxoffice magazine as a ‘comedy block-buster. Theatre grosses should be blown to ceiling heights.’ Variety’s review of the musical Brazil (1944) predicted that it would ‘prove a block-buster at the wickets, a musical investment for Republic that promises to out-gross any previous top-bracket film from this company.’

He tracks the decline of the word from around 1944 and noted that it stopped appearing in either advertising or editorial copy. He believed this could be due to the development of the atomic bomb, and the "outdated" nature of the block buster bombs meaning the public were no longer au fait with the term.

The word began to reappear in Variety in 1948, in two separate articles about releases from major studios and from then on was used in reporting until it grew larger and larger in the 1970s (and to present day).

A block-buster was a type of bomb used in World War 2.

The term blockbuster quickly caught on as a metaphor with many uses, but for movies, it refers to an "explosion" of ticket sales.

"Destined to be a box-office blockbuster [...]"

The reason blockbuster has been associated with Jaws has to do with a theater employee who was asked by the manager to see how long the line to the box office was. After seeing the line around the theater and across the street returned and stated it's a "blockbuster."

14
What is the technique called when series of events in a film are played in reverse order?
49
Why are trailers called "trailers"?
10
Why are soap operas called as such?
34
Why is the first episode of a TV show called 'Pilot'?
54
What is it called when a movie breaks the illusion of fantasy?
30
Why are porn films called blue films?
12
In 'The Hateful Eight', Why is Minnie's Haberdashery's called that?
7
What is this editing technique called?
2
Is a twist ending that occurs at the end of a series of films still called a twist ending?
0
What is the section at the beginning of many TV series episodes called where clips from the last episode are replayed?