Who is the medical jargon shown in House MD attributable to?

Judging by the accepted answer to this question here, it seems that House MD is the most medically accurate series out of all the medical shows out there.

I was wondering who is responsible for all the medical jargon that is an integral part of the show? The opening credits generally do not mention a consulting doctor like they do on some shows nowadays where any consultant is mentioned in the opening credits.

There are a few medical and technical advisors who give input to the show. To name some of them:

From an interview with Med Gadget:

Medgadget: How did you start writing for the NYT and advising for House M.D.?

Sanders: My husband, who is a writer, is incredibly social and often hosts dinner parties at our home. Since we both came from a background in journalism, a large proportion of our friends are not physicians. I found myself explaining the most fascinating cases to our guests, and having to craft the narrative so they understood how cool the profession is. One of the guests at these gatherings, a brilliant writer, was particularly interested in these cases and happened to be an editor for the New York Times. He asked whether the stories I was discussing could be turned into a regular column, which is how my “Think Like A Doctor” column came to be.

“House M.D.” was in-part based on my column, so it was natural to become an adviser to the show. Both opportunities arose not by design, but rather by doing what I loved. That’s advice I regularly give to my trainees.

A 40-year-old Harvard-trained general internist and clinical instructor of medicine at Harvard Medical School, Foster is not treating Hollywood actors. He is putting words in their mouths -- words that resonate with authority and realism.

Foster wangled a job as writer and medical consultant for the hit Fox network TV show "House" by impressing the show's producers with his Harvard Medical School education and his work in the trenches at Beth Israel Hospital and the Harvard School of Public Health.

A nurse who is the on-set medical advisor (and who appears in many episodes as a nurse).

An internist, on the faculty of David Geffen School of Medicine at UCLA, is a consultant for the show.

He can be seen on the IMDB crew page here.

Ultimately, if you look at the closing credits of the show, all the medical advisors for that series are listed:

For example, from 24 seconds into this clip of Season 1's end credits, I took the following still:

Or, from 19 seconds into this clip of Season 4's end credits, I took the following still: 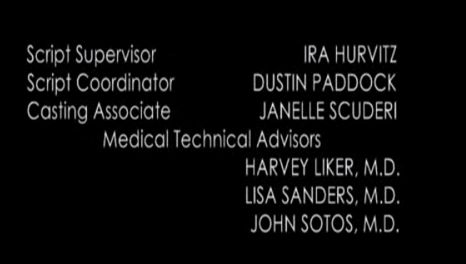 I'm not certain why there's not a name in the credits (if that is the case). If I had to guess why, I'd say it's likely due to the broad variety of diagnoses they deal with so there's no one person who specializes in that many types of medicine.

They do have a full team of advisers, though. The lead seems to be David Foster, who is credited as a "staff writer" rather than as a consultant:

Foster graduated from Harvard Medical School in 1995. He attended school with Neal Baer, a pediatrician who would eventually become the executive producer of Law & Order: Special Victims Unit. As a doctor he worked at Beth Israel Deaconess Medical Center and the Harvard School of Public Health listening to patient's stories and diagnose uncommon illnesses, a skill which he would later utilize as a writer on House.

The two most prolific of these advisors are

Dr. Lisa Sanders is a clinician educator in the Primary Care Internal Medicine Residency Program. In addition to her work as a physician and teacher, she writes the popular Diagnosis column for the New York Times Magazine and the Think Like a Doctor column featured in the New York Times blog, The Well. Her column was the inspiration for the Fox program House MD (2004-2012) and she served as a Technical Adviser to the show.

Through Liker Consulting, Dr. Liker provides exceptional primary care, priority access to leading specialists, treatment plan development and oversight of complex medical issues to individuals, families and corporations. Dr. Liker was chosen by Los Angeles Magazine as one of the best doctors in Los Angeles and by Town and Country Magazine as one of the top doctors in United States.

Dr. Liker has been the medical consultant on the television show “House” since its creation in 2004.

Bobbin Bergstrom is the person apart from the original six cast members who has appeared in more episodes than any other actor or actress. She often appears on-screen as the Nurse character and is a Registered Nurse in real life. She has also been the on-set medical advisor for the series since the Season 1 episode Paternity. She appeared on-screen for the first time in Role Model. At the end of Season 6, she had appeared in 90 episodes.

Not the answer you're looking for? Browse other questions tagged house .

20
How realistic is House MD series with respect to medical science?

17
What was the “It Could Be” running joke on House MD?
20
How realistic is House MD series with respect to medical science?
4
Why did House ask for Ketamine?
5
What actually happens between House and Stacy Warner that she left House in House MD?
8
Why doesn't House prescribe vicodin himself?
13
What exactly is shown on the pagers carried around in House MD or Scrubs?
0
House MD s5 e18 Here Kitty. Was the cat real or CGI?
1
In House MD Babies & Bushwater why did Vogel cancel the c-section?
7
Are there medical equipment product placements in House?
3
How does Dr. House get his patients?